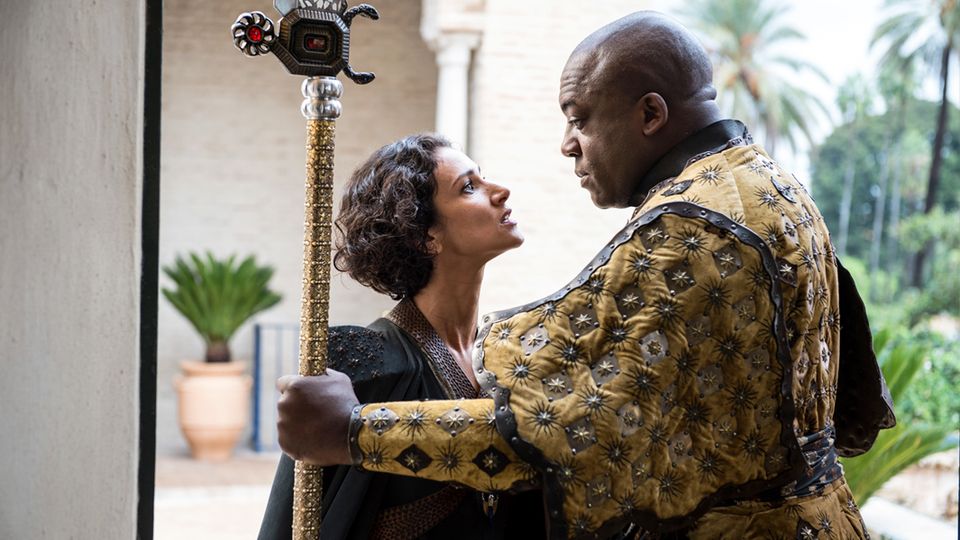 Last week Game of Thrones season 5 kicked off with a great premiere. The Wars to Come set up the fifth season nicely and gave us chance to catch up with many of the main characters.

The House of Black and White was written by showrunners David Benioff and D. B. Weiss with Michael Slovis in the director’s chair for the second time this season.

The episode began with Arya Stark (Maisie Williams) as the boat carrying her across the Narrow Sea approached the city of Braavos. There was some impressive CGI showing the city in the distance and the towering Titan standing before it. Arya then makes her way by rowboat to a large mysterious structure with a black and white door. This is The House of Black and White from the title of the episode.

Arya trots up the steps and knocks on the door hoping to find her friend Jaqen H’ghar (Tom Wlaschiha) from season 2. Instead she is met by an old black man who looks thoroughly unimpressed and turns her away – even when she utters Valar Morghulis and shows the coin that Jaqen gave her.

Confused Arya spends the night sat on the front steps of the building while she obsessively recites her updated kill list.. Walder Frey, Cersei Lannister, The Mountain and Meryn Trant. The next day she tosses her coin into the water and goes off in search of food.

In the Vale, Pod (Daniel Portman) and Brienne (Gwendoline Christie) continue their quest to find Sansa Stark (Sophie Turner). They stop at a tavern which coincidentally is the same one where Sansa and Littlefinger (Aiden Gillan) are sat together. Pod recognises them both sat in the corner and communicates this to Brienne.

Fired up and ready to fight, Brienne confronts Littlefinger while Pod goes to ‘ready the horses’ or at least find some extra. Things don’t go well for Brienne as Sansa refuses to be helped by her after some interfering from Littlefinger.

Brienne and Pod take flight with Littefinger’s guards hot on their heels. A chase gets underway until Pod is accidentally split up from Brienne. After losing his horse and falling in the river Pod is backed into corner but he is saved when Brienne comes to his rescue. During the commotion Littlefinger and Sansa escape.

In King’s Landing a message has arrived for Cersei Lannister (Lena Headey). She opens it along with her one-handed brother (and lover) Jaime (Nikolaj Coster-Waldau). Inside they discover the necklace of their daughter Myrcella (Nell Tiger Free). She was sent by Tyrion (Peter Dinklage) to Dorne to marry Trystane Martell (Toby Sebastian).

The message is obviously a threat from Dorne towards Myrcella over the killing of Oberyn last season. An upset Cersei takes out her anger on Jaime and threatens to burn Dorne to the ground should harm come to their daughter. Jaime vows to head to Dorne to rescue her.

Jaime tracks down Bronn (Jerome Flynn), the sellsword turned lord, and tells him that he must accompany him on his mission. Bronn was due to marry Lollys Stokeworth (Elizabeth Cadwallader) but Jaime has arranged for her to marry another and promises Bronn rewards and a ‘better woman’ for his help.

In the next scene we finally head to Dorne where Ellaria Sand (Indira Varma) is out for blood for the death of Oberyn. She demands that Prince Doran Martell (Alexander Siddig) avenge his brothers death. Her suggestion is sending Myrcella back to Cersai a piece at a time which he refuses.

Across the Narrow Sea in Meereen we see Daario (Michiel Huisman) and Grey Worm (Jacob Anderson) searching the city with their armies – the Unsullied and the Second Sons. They are looking for members of Sons of the Harpy and find one hidden behind a fake wall.

Dany (Emilia Clarke) consults her council and must choose between a fair trial or a public execution. Ser Barristan Selmy (Ian McElhinney) pushes for a trial and uses a tale of her father, the Mad King, to try and convince this is the right thing to do.

Elsewhere in Essos we see Tyrion and Lord Varys (Conleth Hill) aboard a carriage on the road to Volantis. Once their they intend to head to Meereen to seek an audience with Dany. Tyrion is annoyed at being trapped in another box and wants to go for a walk. Varys explains that it’s not safe as Cersai has a price on his head.

The scene cuts to Kings Landing where two men have brought Cersei the head of a dwarf who looks like Tyrion. She then sets about giving titles to the council saying it is the wish of the king, her son Tommen.

Back in the North, at the Wall, Gilly (Hannah Murray) is being taught to read by Shireen (Kelly Ingram). Meanwhile Jon Snow (Kit Harrington) is getting a grilling from Stannis Baratheon (Stephan Dillane) and Ser Davos (Liam Cunningham). Stannis is rather unimpressed that Jon ended the suffering of Mance Rayder. However he has plans for Jon and unexpectedly offers to make him Jon Stark, Lord of Winterfell but Jon refuses.

Jon is stubborn and wants to fulfill his oath to his brothers of the Night’s Watch. Later a vote is held for the 998th Lord Commander and Sam (John Bradley-West) puts Jon forward with a clever speech. The vote takes place and after an initial tie Jon is given the new title over Ser Alliser Thorne (Owen Teale).

Back to Braavos we see Arya killing pigeons for food. She is set upon by a group of lads but disappointingly doesn’t get to deal with them. Instead the mysterious man from The House of Black and White turns up and saves her.

She follows him back to The House of Black and White to discover that he is infact Jaqen H’ghar. He’s been using his special Faceless Men powers.

Back in Meereen, Mossador (Reece Noi) takes it upon himself to kill the captured Son of the Harpy. For going against her wishes she sentences him to death and has him beheaded by Daario in front of the city. The slaves react by calling for mercy and then hissing at her when she refuses.

Later that night she goes to the balcony of her chambers to find her missing dragon Drogon waiting for her. The CGI here is again impressive and Drogon takes off into the night sky.

A typically packed Game of Thrones episode it seemed to fly by. There is so much going on it’s hard to keep up at times. One thing that’s obvious is that the show is definitely starting to go in different directions to George R. R. Martin’s books. At times it does things quite differently and is a lot more focused.

Let us know your thoughts on The House of Black and White in the comments below as well as your hopes for the rest of the season.

Advertisement. Scroll to continue reading.
In this article:Game Of Thrones, The House of Black and White