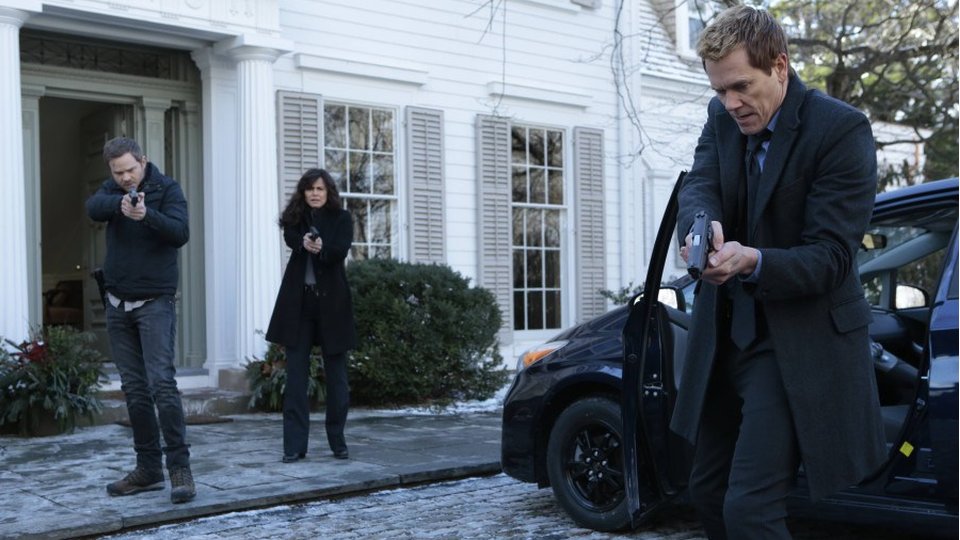 Theo (Michael Ealy) left his family behind as he went on the run in the latest episode of The Following.

If you haven’t seen the latest episode of The Following and you don’t want any spoilers then stop reading now. If you have seen it and want to relive the action then keep reading.

Ryan (Kevin Bacon), Max (Jessica Stroup) and Mike (Shawn Ashmore) went rogue (again!) after disagreeing with Agent Donovan (Mike Colter) over who was behind the Manitech hack. Widening their search of Manitech employees, Max narrowed it down to Sam Lewis who was too clean and remembered she had a run in with him when she visited the offices.

Ryan and Mike went to visit Sam/Theo’s house only to find that it was empty and rigged with explosives. Theo was watching everything remotely and Ryan and Mike narrowly escaped with their lives. Meanwhile Max located a photo of Sam/Theo but as she was trying to save them, Theo hacked into the system and changed all of the pictures leaving them with no image of him.

Max arrived at the scene of the blast and it was confirmed that nothing useful survived in the explosion. Agent Donovan also arrived and told them to run the photo of Sam through their files but Max explained they didn’t have one. As she had seen him, Max was told to work with a sketch artist to get an image they could use.

Ears in the basement

Gina Mendez (Valerie Cruz) decided to take an early retirement from the FBI in the wake of the latest string of murders. Ryan talked her out of it and she agreed to assist him until the investigation was over. They paid a visit to Eldon Wick (David Pittu), the man who vouched for Sam/Theo at Manitech. Upon arriving at his house they discovered a basement with ears hanging from the ceiling and a man tied to a chair with his brain exposed. Eldon arrived home and interrupted their search, knocking Gina over and trying to run for it.

Ryan caught him and during an interrogation Eldon said that he was delighted to be face-to-face with the man who captured Joe Carroll. Eldon went on to explain that Sam/Theo had located him through chat rooms for people with dark habits. He was forced to help Sam get into the FBI and given a USB full of Sam’s information to falsify documents. Eldon hadn’t destroyed the USB and handed it over to Ryan.

On the stick was Sam’s digital fingerprint and it led the FBI directly to Theo’s address in Maryland.

Theo continued to play happy families with Cindy (Susan Kelechi Watson) and their kids but he became increasingly annoyed when Cindy’s interfering friend Nancy (Julie Ann Emery) suggested he might be cheating on her. With Cindy starting to get suspicious, Theo organised a surprise party for her birthday. Nancy continued on her quest to prove Theo was cheating on Cindy and tackled him about the place he said he works. She revealed that her husband has a friend who works in the same department and when Theo can’t cover his tracks Nancy smugly believes she’s caught him in a lie.

Well unlucky for Nancy, Theo arrived at her house and killed her and her husband. News of the murder reached Cindy the next morning and she was devastated about the loss of her friend. Cindy made plans to take the kids to her mother’s whilst she processed the news of the murders.

On the plane to Maryland, Max found a partially obscured picture of Theo with Cindy on Facebook. They tracked Cindy’s address down which alerted Theo that he was about to be caught. In a panic he sedated his children and killed Cindy before fleeing. Ryan and the team arrived too late to save Cindy and Gina decided it was too much and she was definitely leaving the FBI starting immediately.

Theo called Ryan and told him that he will ‘take his future’ and has only show him what he wants him to see at this point.

Ryan returned home late to an angry Gwen (Zuleikha Robinson) who was mid-way through the dinner party she was throwing with her boss. Arriving in time for desert, it didn’t take long for Ryan to lose his temper when Gwen’s boss suggested that executing Joe Carroll (James Purefoy) might not be the best thing. That comment got Ryan into a rage and he threw Gwen’s boss and his wife out of the apartment. He then rowed with Gwen who got even angrier when Ryan accidentally said that he and Joe were almost killed, rather than Mike.

The road to execution

Joe was told that his execution was imminent and he had to be assessed by a psychologist to check that he was ready to die. During his meeting Joe had a fantasy that he broke out of the prison and killed several police and the psychologist. Of course that didn’t actually happen and Joe continued on with his assessment. He was told that Ryan wouldn’t be attending the execution leading him to launch into a tirade of threats.