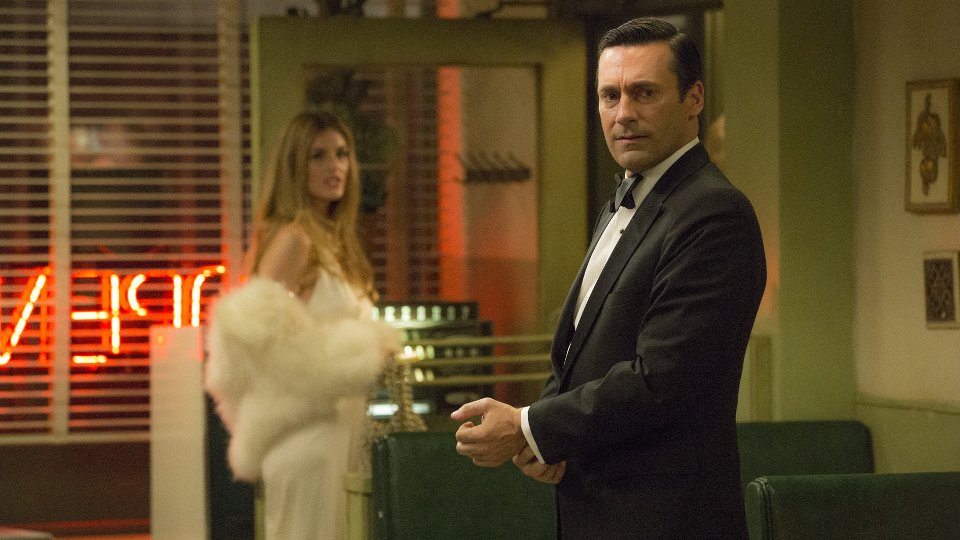 Mad Men returned to UK screens tonight as the series enters into its last run of new episodes before bidding adieu.

If you haven’t seen the latest episode of Mad Men and don’t want any spoilers we suggest you stop reading now. If you have seen it and want to relive all of the action then keep reading.

It wasn’t Menken to be

Don (Jon Hamm) is back to his womanising ways in the wake of his (nearly finalised?) split with Megan (Jessica Pare). The episode opened with him casting women for a Wilkinson’s commercial that involved them being seductive in a fur coat and not much else. Following the casting Don and his latest female companion accompanied Roger (John Slattery) and his two female companions for a late night trip to a diner.

Waitress Diana (Elizabeth Reaser) caught Don’s eye and he was convinced he knew her from somewhere. His chance to find out was scuppered by Roger’s rudeness, which he eventually apologised for by leaving a $100 dollar bill in payment for a $12 check.

Back to his day job Don asked Meredith (Stephanie Drake) to contact Menken’s department store to set up a meeting with his old flame Rachel Katz nee Menken (Maggie Siff) after he had a dream about her attending his Wilkinson casting. He was shocked to find out his former love had passed away following a battle with leukaemia and attended her wake where he received a less than warm welcome from her sister.

Returning to the diner, Don pursued Diana and followed her into an alley behind the building when she took a cigarette break. The two had sex before returning to the diner. Diana mistakenly thought Don was back to reclaim what he ‘paid for’ with Roger’s $100 bill and told him that wasn’t going to happen again.

Joan (Christina Hendricks) was less than impressed when a meeting with Topaz tights didn’t go the way she’d hoped. Aided by Peggy (Elisabeth Moss), Joan approached McCann Erickson to reach out to their new business partners for help introducing them to department stores to try and increase Topaz’s sales. She was greeted by three men who were more interested with making lewd and reductive comments about her but left the meeting having achieved what she wanted. That didn’t mean she was happy though and a snappy exchange with Peggy showed that Joan wasn’t ok with not being treated seriously. How did she make herself feel better? A lot of expensive shopping.

Peggy’s colleague John Mathis (Trevor Einhorn) tried to set her up on a date with his brother-in-law Steve (Devon Gummersall) and at first she was having none of it. Following Joan’s comments about the way she dresses, Peggy decided to accept the set-up and went on the date with Steve. The two clashed to begin with when Peggy made a big fuss about Steve receiving the wrong meal from the waiter. The two agreed to swap meals to resolve the issue and promptly got very drunk.

Taking Steve back to her apartment, Peggy stopped herself just as she was about to sleep with him. That didn’t stop her from trying to find her passport so the two could go off to Paris together for a romantic getaway. She couldn’t find the passport but negotiated with Steve that they could go away together in a couple of weekends’ time. The next morning she wasn’t quite feeling the same passion as regret and a stinking hangover kicked in as she found her passport in her desk drawer at work.

Ken (Aaron Staton) has been down on his luck for a while now and that definitely didn’t change in this episode. After arguing with his wife Cynthia (Larisa Oleynik) about his future at the firm following the new merger, he told her he was holding out for a promotion he knew was coming his way. His father-in-law, responsible for giving the firm the Dow business, announced his retirement and Ken saw an opportunity to step up. Unfortunately he was greeted by a surprise courtesy of Roger and one of the McCann Erickson bosses who took him off the Dow business and fired him.

Angry at what happened, understandably, and believing that his previous history with McCann Erickson was to blame Ken got the ultimate act of revenge when he approached Dow and was appointed their new Head of Advertising meaning that he is now a client of his former agency. He promised Roger that he wasn’t going to be an easy client to please. Uh oh!

Tune in to AMC at 10/9c on Sunday in the US and Sky Atlantic at 10pm to see the next episode, New Business. Watch the promo below: