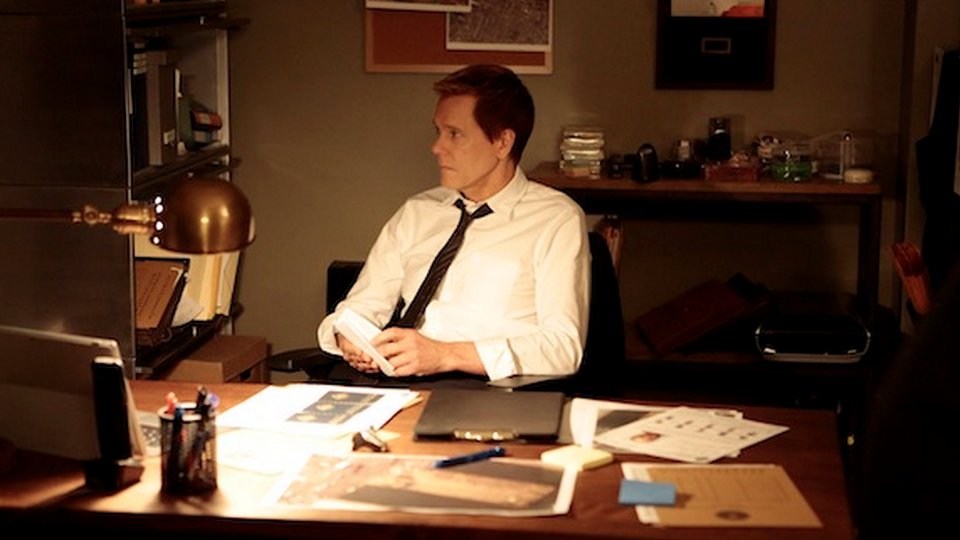 Just when you thought you had this season’s big bad all figured out, The Following goes and throws you a curveball.

If you haven’t seen the latest episode of The Following and want to avoid spoilers we suggest you stop reading now. If you have seen it and want to relive the action then keep reading.

Ryan (Kevin Bacon) and Joe (James Purefoy) came face-to-face at the end of last week’s episode and tonight the two started to open the lines of communication once again. Drawing a blank following the escape of Strauss (Gregg Henry), Daisy (Ruth Kearney) and Mark (Sam Underwood), Ryan was left with no choice but to turn to his enemy for help. After the usual mind games Joe offered to help Ryan if the desperate FBI agent promised to visit him every day leading up to his execution. Joe directed Ryan to look at Strauss’ connections with a specific emphasis on his students in order to find him.

With Mendez (Valerie Cruz) suspended, Ryan was (seemingly) left in charge and took Joe’s advice by starting to search for connections to Strauss. A quick sift through the missing person cases highlighted a high number of disappearances in the small town of Beacon. Despite currently being at loggerheads, Mike (Shawn Ashmore) and Ryan agreed to investigate together in a bid to find and stop Strauss.

Once in Beacon Ryan had a frosty meeting with Sheriff Windsor (Michael Gaston) but found an ally in young officer Hilary Banks (Allison Mack). She recognised one of the photos from Ryan’s missing people file and took him and Mike into the woods where they found the body of a woman who may be the woman from the photograph. After scouting round for a while they find a man in a mask near a weird collection of creepy dolls hanging from the trees.

Continuing their investigation, the team soon finds 10 buried bodies (the Beacon police department clearly didn’t look very hard did they?) all with their teeth missing and their fingers cut off. At Hilary’s uncle Duncan’s (Tim Guinee) diner, they discuss the case and are pointed in the direction of the Sheriff’s oddball son, which turns out to be a red herring as he’s secretly cooking meth rather than murdering people.

The forensic team confirms that the body of one of the victims found is the late wife of Hilary’s uncle Duncan, who we saw visiting Strauss and Daisy to warn them about the FBI. Ryan and Mike arrived at the diner to arrest him and he threatened to kill Hilary. She threw a hot cup of coffee in his face and broke free, and Duncan was taken into custody.

Duncan wasn’t the only person the FBI was after this week. They discovered that Strauss had employed the skills of a hacker to plant fake evidence that helped him get his case thrown out of court. The hacker, Theo (Michael Ealy), murdered Strauss’ lawyer before heading off to meet his mentor to supply him with fake credentials to allow him to escape the FBI.

How does Theo play into the main storyline we hear you ask? Turns out he had a fortunate run-in with Strauss 13 years earlier after he was wounded during an attack on an office complex. Strauss helped him recover and trained him to become the sick and twisted killer he now is.

Anyone expecting a warm and fuzzy reunion between Strauss and Theo would have been left shocked when the student arrived to see his mentor and promptly killed him. He blamed Strauss for ‘exposing’ him and decided to spare Daisy (why?! We don’t know either!). Once that deed was done he returned home to his wife and two young kids whilst Daisy hitched a ride from an unknown acquaintance.

Ryan and Mike soon discovered Strauss’ dead body in Duncan’s cabin in the woods and questioned the murderous follower in his orange jump suit. Duncan claimed to know nothing about the identity of Strauss’ killer other than that he was the teacher’s favourite student.

Max Hardy (Jessica Stroup) spent the episode recuperating after being discharged from hospital. Her creepy boyfriend Tom (Gbenga Akkinagbe) continued to watch her on Daisy’s laptop as he skirted around the knowledge that she slept with Mike. Tom witnessed Mike turning up at Max’s apartment and overheard her telling him she won’t cover up another of his executions. How’s he going to use that against Mike we wonder?

The Following continues Monday at 9/8c on FOX in the US and Saturday at 9pm on Sky Atlantic in the UK. Watch the promo for next episode The Hunt below: