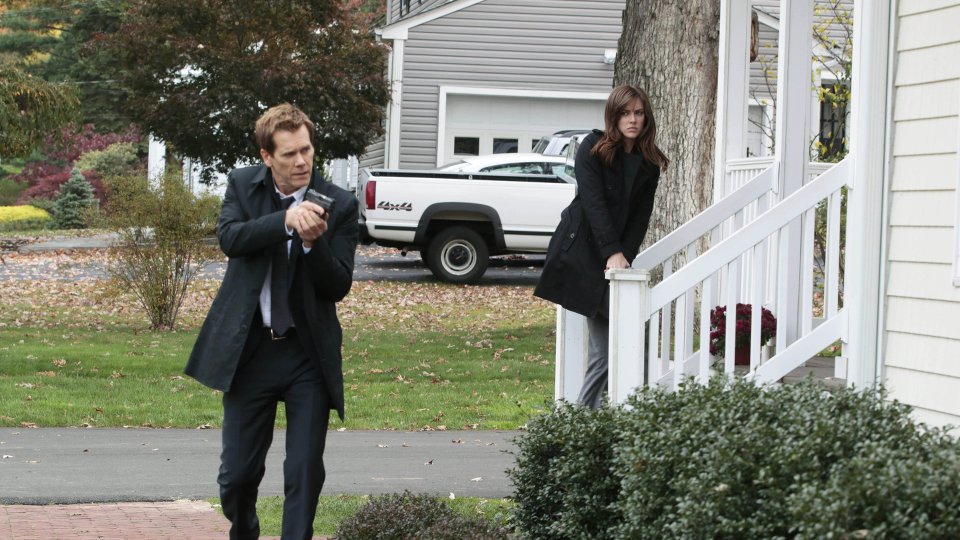 The motive’s behind the latest spree of murders started to become a bit clearer in the first of tonight’s two episodes of The Following.

Daisy (Ruth Kearney) and Kyle (Hunter Parrish) set their next plan into motion tonight by pushing college student Reggie (Max Carver) in front of a van and killing him. At first the attack seemed random but as the episode progressed it was all revealed to be part of a larger plan.

When Ryan (Kevin Bacon) and Max (Jessica Stroup) found their house in Ohio and contacted them via their dog sitter, a spooked Daisy and Kyle, with the help of Mark (Sam Underwood), attacked a local fire station killing the four men working that shift.

Ryan and Max arrived back from Ohio and headed straight to the fire station where it was revealed that Ryan’s late brother, and Max’s father, had died whilst on duty one night. The FBI concluded that the attack was to get personal with Ryan and Max as they found another message scrawled in blood on the wall saying ‘Heroes die, while you lie’. The purpose of the murder spree was actually so that Daisy and Kyle could get the fire officer’s access cards that allow them to enter any key carded building in their district.

The killer couple once again tried to get Julianna (Anna Wood) to get them out of New York but she refused saying they needed to complete their task and ‘make it look like a suicide’. It turned out that their next target was Reggie’s girlfriend Marisol (Hannah Marks). They gained access to her room and dragged her to the roof top after posting a suicide note online. As they attempted to complete their plan the FBI arrived. Daisy attacked Mike (Shawn Ashmore) and forced him off the roof leaving him clinging on for dear life whilst Ryan shot and wounded Kyle. Determined to get away from Ryan, Kyle stabbed Marisol and escaped through a trash chute.

Mike meanwhile was saved by Tom (Gbenga Akinnagbe), who hesistated (we’ll get onto that), and Max.

Daisy managed to get Kyle to safety but he passed out due to blood loss following being shot. In desperation she called Mark who thought that they had stitched him up. Mark agreed to help Daisy despite battling with his dead brother’s voice inside his head.

So what are Daisy, Kyle and Julianna up to then you ask? Well Marisol is the daughter of the judge presiding over Arthur Strauss’ (Gregg Henry) case and Julianna was seen visiting him in the final scene of the episode telling him there had been a set back. Our money is on them trying to spring him out of jail…

The attack on the fire station drove Max to the edge and after getting a little drunk, she called Mike and asked him to come over. Their honest exchanges soon led into the bedroom with Daisy and Kyle watching them via the secret cameras they installed. The next morning Max was full of guilt and regret and gave Mike the cold shoulder. She felt even worse when Tom called to say they had located Mark’s house thanks to Daisy and Kyle being caught on CCTV.

Rushing over to the scene, Max lied to Tom who had discovered her infidelity via Daisy’s laptop, which he found in the killer couple’s room. He secreted the laptop away under his vest and was shocked that Max had cheated on him.

A bottle for your thoughts

Ryan moved Gwen (Zuleikha Robinson) into his apartment and was taken aback when she pulled a couple of bottles of alcohol out of one of her boxes. She offered to throw them away but Ryan said he’d be fine as he’s been clean for two years. Later on following the fire station attack, Ryan reached for the bottles but was interrupted/saved by Gwen who came to see how he was. How long before he’s back on the bottle?

The Following continues now on Sky Atlantic HD with the second episode of the evening.