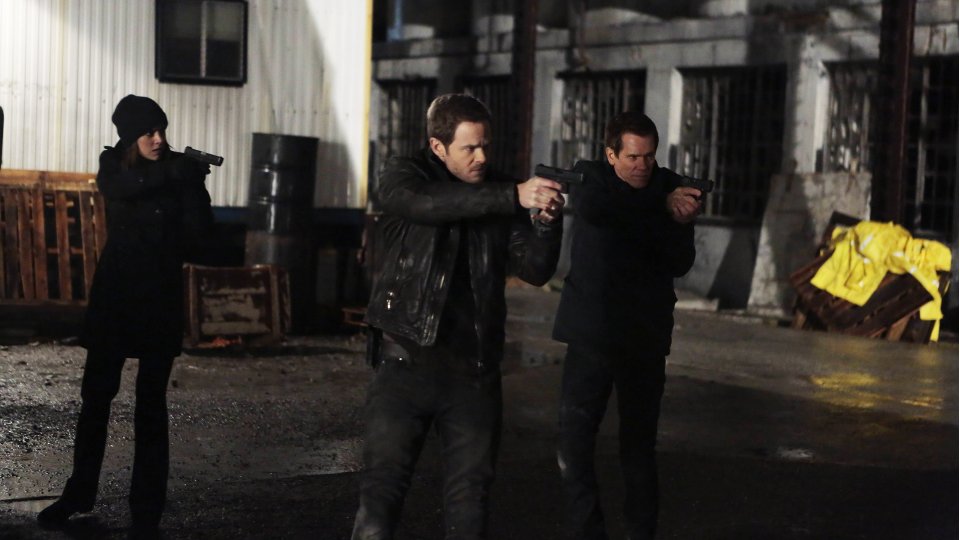 A major character’s life hung in the balance in the second of tonight’s instalments of The Following.

The day of Arthur Strauss’ (Gregg Henry) trial arrived and Ryan (Kevin Bacon) was put on the stand to testify. He was one of two witnesses called to try and keep Strauss in jail. On the stand his reliability was called into question when the defence counsel questioned Ryan’s motives when he broke into Strauss’ house. An email was produced as evidence that the defence claimed was from Agent Clarke that admitted Ryan had lied and covered up evidence.

The trial came to a screeching halt when the next witness, journalist Carrie Cooke (Sprague Grayden) failed to show. Whilst Ryan was on the stand Daisy (Ruth Kearney) and Kyle (Hunter Parrish) took their latest orders from Julianna (Anna Wood) and managed to get access to the room that Carrie was staying in. The court granted the prosecution one hour to find their witness and Ryan headed straight to Carrie’s hotel room, which was empty.

Mike (Shawn Ashmore) and Max (Jessica Stroup) found a blood trail. They then managed to find CCTV of a van that a witness said they saw Daisy and Kyle driving. Arriving on the scene, the team found the van burning with Carrie’s body inside. Ryan searched the area and followed blood spots that led him to Daisy and Kyle. Daisy managed to flee but Kyle’s injury prevented him from following. He made a last ditch attempt to attack Ryan but was shot dead.

Unable to produce their second witness, the prosecution had their case dismissed and Strauss was released from prison. Gina (Valerie Cruz) told Ryan, Max and Mike that she was told to suspend them but gave them a 24 hour window to connect Strauss to Daisy.

On her own and devastated about the loss of Kyle, Daisy reunited with Strauss. He gave her the option of going with him or letting him kill her after she tried to attack him. She chose to accompany her mentor so they could start a new life.

Mark’s (Sam Underwood) suspicions about Daisy and Kyle proved to be true. He caught the couple in a lie when they asked him to get supplies to treat Kyle’s wound. Mark hovered outside the street and saw Daisy and Kyle leave their hotel. He followed them and saw them meet with Juliana whom he subsequently stalked for the rest of the episode. He saw her arrive at the court house for the trial then followed her back to her apartment where he tortured and killed her using an iron as his weapon of choice, after she told him where Strauss is and revealed that Daisy and Kyle were two of his students.

Ryan and co turned up at Julianna’s apartment and found the dead woman’s laptop. By looking at her search history they figured out that Strauss was heading to the docks so he could flee.

Sitting on the dock of the bay

Daisy and Strauss were confronted by Ryan, Max and Mike at the docks. Just as it looked like they’d caught them, Mark popped up firing shots at everyone. Daisy escaped but Mike and Max caught Strauss. As Max hauled Strauss off in handcuffs, Mark appeared and Mike chased after him injuring him by shooting him in the leg. Max was attacked by Daisy and left for dead, and Ryan caught up with Mike who was seconds away from killing Mark. After he talked him out of it, Mike lowered his gun and Mark jumped into the water.

Max was rushed into hospital as Strauss and Daisy escaped. Ryan and Mike butted heads over Max’s near fatal attack and doctors confirmed that she would survive.

Realising that he had to do what he’s put off doing for ages, Ryan finally gave in and visited Joe Carroll (James Purefoy) in prison. With Strauss, Daisy and Mark all on the run, Ryan was left with no choice but to turn to his former enemy for help.

The Following continues Mondays on FOX at 9/8c in the US and Saturdays on Sky Atlantic HD at 9pm in the UK. Preview the next episode of the season Reunion below: