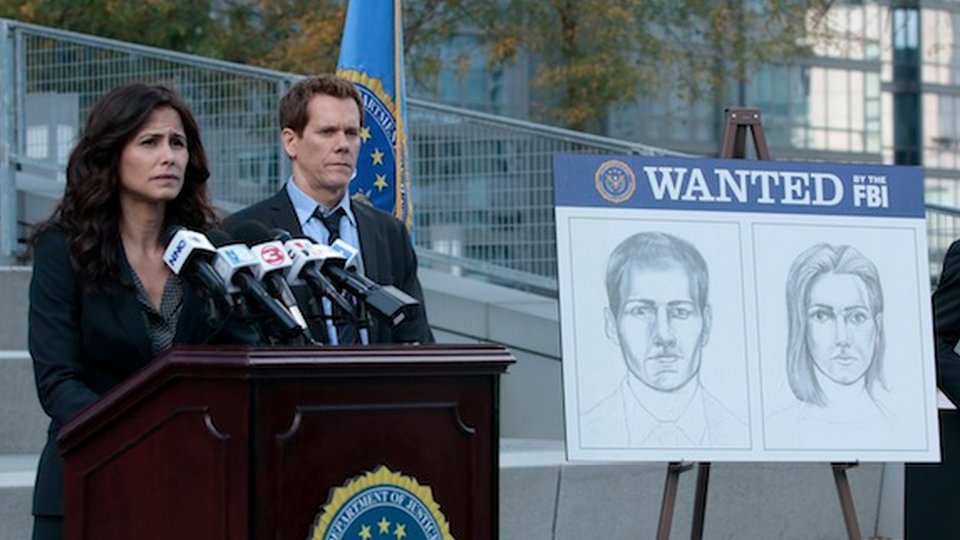 Mark’s (Sam Underwood) plan for revenge was revealed not to be the only killer plan running through this season of The Following in the latest episode.

If you haven’t seen the latest episode of The Following and don’t want any spoilers then we suggest you stop reading now. If you have seen it and want to relive the action then keep reading.

The search for Neil (Glenn Fleshler) continued this week as Ryan Hardy (Kevin Bacon) and his team sought justice for fallen agent Jeffrey Clarke (Felix Solis). The search led Ryan to a former sex worker who was an informant for him. She gave him the details of a man who makes a living cashing in on sexual fetishes and the team located him mid-job in an abandoned warehouse. After Ryan and Mike (Shawn Ashmore) threatened to torture him, Max (Jessica Stroup) stepped in and got an email address for Neil.

The FBI traced the email address to Neil’s shop where he was holding his father’s carer captive after her lack of vigilance led to the old man fleeing from his house. As he put the finishing touches to a new box and threatened to kill the carer, Ryan and co burst into the shop but Neil managed to escape. The box maker kept up his one step ahead routine as he collected his father, killed the new carer and fled. The FBI arrived just minutes after and Ryan realised that if Neil’s father had dementia they could track him by his GPS locator.

The team discovered that Neil had stopped at a farmer’s market and as they arrived, Neil realised his father had the tracker around his neck. Removing it, Neil once again tried to flee but a spanner was thrown in the works when his father witnessed him killing a man so he could steal his car. Neil’s father became hysterical attracting Ryan’s attention but Neil jumped in the car and drove away. Ryan gave chase and ran Neil off the road. A tense stand-off occurred and Max got carried away firing several bullets into Neil’s chest killing him.

We’re guessing that threat Neil made about visiting Daisy (Ruth Kearney) and Kyle (Hunter Parrish) won’t be coming to fruition any time soon then?

Daisy and Kyle became increasingly concerned about Mark’s mental state as well as the fact their faces were all over the news and called in the mysterious Juliana. They met with her in a diner and were told in no uncertain circumstances that they weren’t getting out of their current situation any time soon as they had a schedule to stick to. Before she left Juliana handed over a file containing pictures of Max and the details of her security codes for her building. It seems the killer couple are using Mark for some end game to carry out another murderous plot he’s completely unaware of.

Returning back to Mark’s house, Daisy and Kyle were less than impressed to discover that he had kidnapped two local news reporters following a press conference given by Ryan and Gina (Valerie Cruz). Determined to set the record straight Mark set up an interview with his captives but killed one of them when they went into shock. He continued the interview with his second captive but after she told Mark that Kyle and Daisy were playing him, she made a run for it. Unfortunately for her she was killed by Daisy but she definitely planted the seeds of doubt in Mark’s mind about his new friends.

Pushed to the Max

The stress of covering up lies with lies got a little too much for Max this week. After getting a little too trigger-happy with Neil, Max turned to Mike (Shawn Ashmore) for comfort following Clarke’s memorial service. As the two former lovers embraced, Max was spotted by her new boyfriend Tom (Gbenga Akkinagbe) who looked less than happy at their reunion.

Later as she arrived back to her apartment building she was startled by Tom who arrived to pick her up for dinner. As she left it was revealed that Daisy and Kyle were in her apartment but they weren’t there to kill her (not yet anyway!); they were planting camera around the apartment to keep an eye on her.

Gwen and Ryan sitting in a tree…

The episode opened with Ryan having a nightmare that Gwen (Zuleikha Robinson) had suffered the same fate as Clarke. Worried about his new love, Ryan asked her to move in with him. She agreed but on the condition that he kept no secrets from her. Is anyone else slightly worried that Gwen may not be the goody two-shoes she seems to be?

Tune in to FOX at 9/8c on Monday in the US and Sky Atlantic HD at 9pm on Saturday in the UK for the next episode. Preview it with the promo below: