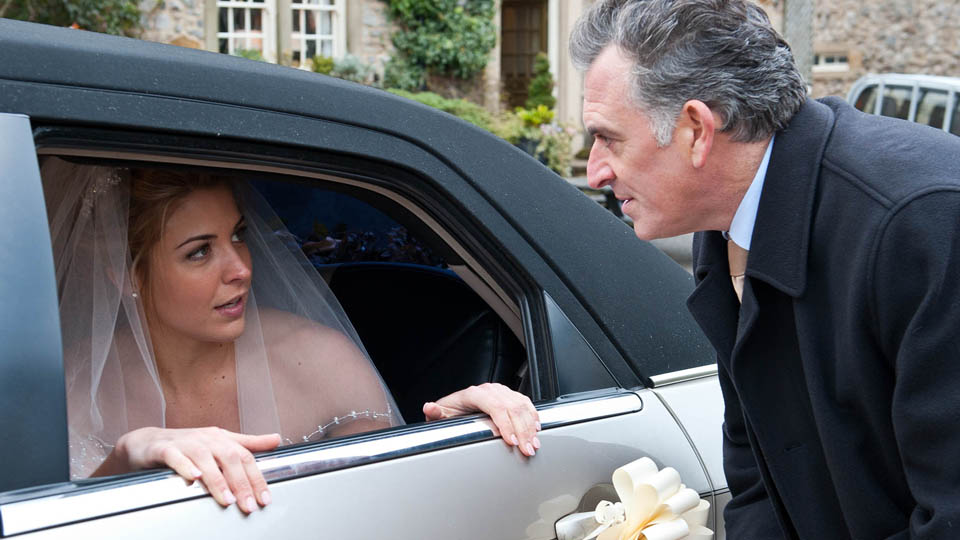 Welcome to our look at the week ahead in the sleepy village of Emmerdale.  Read on to find out what’s in store for your favourite rural characters this week:

A surprise wedding for Bob

Bob Hope is no stranger to marriage, or divorce come to think of it!  This week he’s in for a shock when his estranged daughter Carly (played by ex-Hollyoaker Gemma Atkinson) turns up out of the blue, dressed in her wedding gown and urging him to jump in and attend her wedding.

A stunned Bob soon has concerns about the nuptials and tells Brenda that he wants to keep Carly in the village where he can keep an eye on her.  Carly parks up her van and tries to be entrepreneurial by selling goods to passers-by.

We’ve got a feeling she’s going to be a handful!

With a job interview looming with Bernice, Laurel pours herself a large glass of vodka and orange to calm the nerves, but when Paul turns up to give her some help with her interview prep, Laurel doesn’t see April take the drink.  Afterwards April becomes increasingly unwell and Laurel confides in Bernice and the pair take her to the hospital.  Will Laurel be able to hide this from Marlon?

Meanwhile, Doug is worried about his daughter’s dependency on alcohol and thinks the make-up parties might be a bad idea, encouraging her to drink more.  He goes on a mission to monitor her drinking.

It’s Vanessa’s birthday this week, but unlike most girls she’s trying to hide this fact from her boyfriend, Kirin, for fear of highlighting the age gap between them.  They go and look at a flat that she’s considering and as things get a bit steamy and hands roam, Kirin stops dead, telling Vanessa he’s found a lump on her breast.  Vanessa’s mind is whirring as she heads to the doctors, but has the discovery sent Kirin running?

That’s not all she has to contend with.  Earlier in the week Leyla and Vanessa are stunned when they realise Andy has changed the locks to their cottage and moved himself in with Tracy!

Victoria tries to set Finn up with nurse Darren, who comes to check up on Val.  When have you ever known these things to work out as planned?

Nicola tells Jimmy she wants to move to Dubai and even starts discussing selling his half of the haulage firm behind his back.  Can he be persuaded?

Priya thinks she might have seen a flicker of something between Georgia and Rishi.

Rachel puts Sam in a difficult situation when she tells him she doesn’t want Archie anywhere near a returning Belle.

Pearl is worried the net is closing in on her when Paddy can’t access the online bank account.