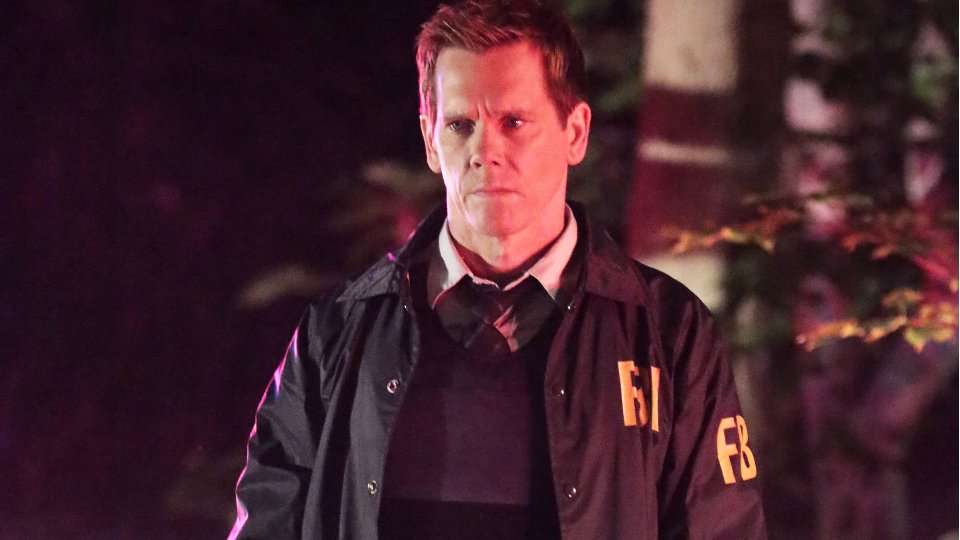 The Following returned in the UK tonight and it was one hell of a season premiere with plenty of bloodshed and twists to ensure you keep watching over the next 14 weeks.

If you haven’t seen the latest episode of The Following and don’t want any spoilers then stop reading now. If you have seen it and want to relive all of the action keep reading.

Blood on their hands

The episode opened one year on from season 2 with Gina Mendez (Valerie Cruz) getting married and Ryan Hardy (Kevin Bacon) acting as Best Man. As he was giving his speech about finding true love, Ryan was accosted by a man claiming to be the father of a girl shot dead by Ryan at Korben. He threw blood all over Ryan, Gina and Gina’s bride before leaving the wedding party with everyone shocked at what just happened.

We had a feeling that the wedding crasher wasn’t who he said he was and that proved to be very true. Andrew (Michael Irby) is a follower, not the father of a Korben victim, but he’s not following Joe; he’s part of a new cult led by Mark (Sam Underwood). It also seems (for the moment anyway) that he’s running things as he oversaw the murder of a couple in a hotel by killers in love Daisy (Ruth Kearney) and Kyle (Hunter Parrish).

The murders were part of a tableau recreating the murders of Mark’s family members. At the first crime scene ‘Ryan Hardy lies’ was scrawled on the walls in blood and with little to go off, Ryan started to look for Andrew after discovering he’d lied about his identity. After successfully finding an address they went to an abandoned apartment block where they found another tableau, this time with ‘Max Hardy lies’ scrawled in blood on the wall.

For the episode’s third tableau, Mark came out of hiding to show off his shiny new blonde hair and his fake beard. The target? Someone who looked like his mother Lily (Connie Nielsen). Ryan made the connection to the tableaus and Mark and led the FBI to an art gallery event but they arrived too late. Mark had already kidnapped a woman and executed her in the woods. Ryan did manage to apprehend Andrew who gave him little to go off other than tell him where to find the next tableau. Arriving in the woods they found a series of dead bodies recreating Lily’s murder with the words ‘while you lie, more die’ written around them.

Andrew forewarned Rick that he has no idea what’s coming up next and Mark teased at the end of the episode that ‘one of them’ will die so we’re feeling a bit worried about Mike (Shawn Ashmore) and Max (Jessica Stroup) right now. Mark’s decent into madness continued with the troubled twin taking on the personalities of his dead mother and brother, with him talking to a mannequin with a mirror for a face pretending it’s Luke.

The episode had a distinct lack of Joe Carroll (James Purefoy) but that doesn’t mean he wasn’t on everyone’s minds. The cult galvaniser is in a secure prison waiting for be executed in a month’s time. Ryan hasn’t visited him since his arrest and is trying to put everything behind him, especially after he, Max and Mike were almost charged thanks to their unorthodox (and illegal) way of stopping Joe and his cult last season.

Love is in the air

This season Ryan has a new love interest in the shape of Gwen (Zuleikha Robinson). Seemingly all lovey dovey at the start of the episode, Ryan tried to push Gwen away after she hinted about moving in with him and he got pulled into the latest murder spree. Sensing he was trying to protect her, Gwen argued her case and at the end of the episode she arrived at Ryan’s apartment after he called her. Did he learn nothing from his past attempts at having a love life?

One couple who certainly don’t have much love for one another is Max and Mike. After arriving at the wedding, Mike saw Max with her new boyfriend and things were pretty awkward. It transpired that Mike became consumed with finding Mark and left Max to hunt him down thus ending their burgeoning relationship.

The Following continues Mondays at 9/8c on FOX in the US and Saturdays at 9pm on Sky Atlantic HD in the UK. Watch the trailer for the next episode Boxed In below: