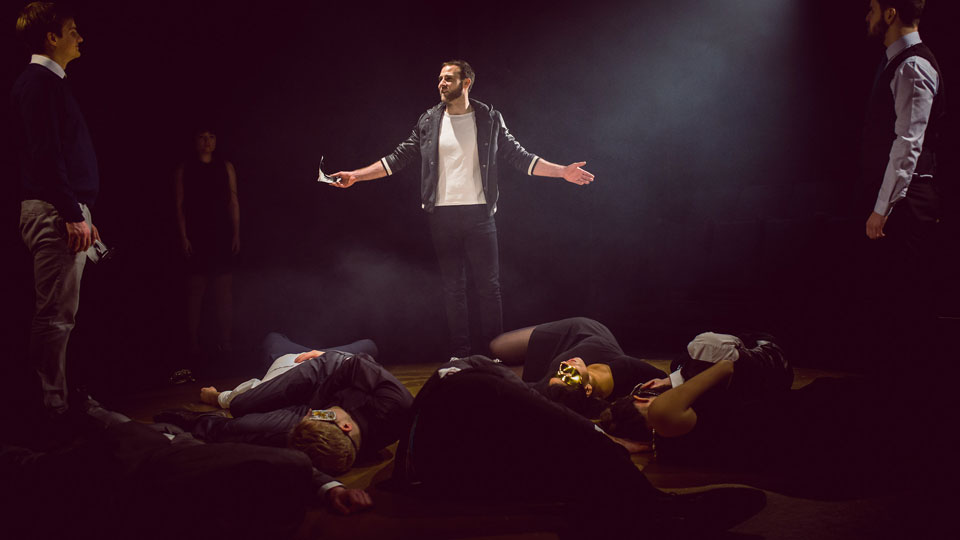 Thomas Middleton’s The Revenger’s Tragedy is a good reminder that people have always been easily bought, politicians have always been corrupt, and there’s nothing new about sex scandals and abuse.

The bloody Jacobean play with a rape and a high body count is given the Lazarus Theatre Company treatment at the Brockley Jack. That is, it’s presented as a highly ambitious production with a large and remarkably uniform cast, in a style that is both slick and at times confrontational.

A very convoluted plot, which is skilfully picked out in the show, sees Vindice (Lewis Davidson) seeking revenge on the Duke’s family for the poisoning of his woman years earlier. He goes undercover to supposedly help the Duke’s son Lussurioso (Liam Steward-George) buy the virginity of a young woman at court – though that woman turns out to be his sister Castiza (Elle Banstead-Salim). It’s also full of rich subplots and scheming characters (Jamie O’Neil and Alexandra Reynolds form a great double-act as conniving ‘brothers’ hoping to do away with their other sibling), and the usual requirements to suspend your disbelief that make plays of this period so much fun to watch (not even Vindice’s mother and sister can see through his disguise).

A painted section of the stage marks out where the intrigue in the Italian court takes place, and stark overhead lighting, casting eerie shadows, effectively puts the upper echelons of society under the spotlight whilst they are encircled by masked onlookers. It’s an unsettling experience to have the actors turned towards the audience whilst staring behind masks, though the downside of this is that it leaves some of the sight lines partially obscured on the sides.

As usual from a Lazarus production, the cast coheres into a well-drilled house performance style, and whilst some of the supporting actors are a little off the pace, the leads carry the action through with great conviction. Lewis Davidson and Liam Steward-George impress with equal charm and confidence, especially when playing opposite one another as the two rivals Vindice and Lussurioso, whilst Paula James brings solid support to the dual roles of Vindice’s mother Gratiana and the Duchess (the doubling up of parts is done without confusion, save for this one example, which is mitigated by the actor’s differing characterisations).

The Revenger’s Tragedy is solid, dramatic, and consistently compelling for ninety minutes. Although director Gavin Harrington-Odedra never loses focus on the story, the final act feels rushed. Nevertheless, it’s a satisfying showdown between Vindice and Lussurioso that audiences will leave with in their minds.

This is a good opportunity to see an often overlooked Jacobean masterpiece, and this production does a great job of making a classic resonate in our own age. With a homoerotic subtext between hero and villain, and a court full of cut-throats, this version of The Revenger’s Tragedy is fresh, modern and thoroughly entertaining.

The Revenger’s Tragedy at the Brockley Jack