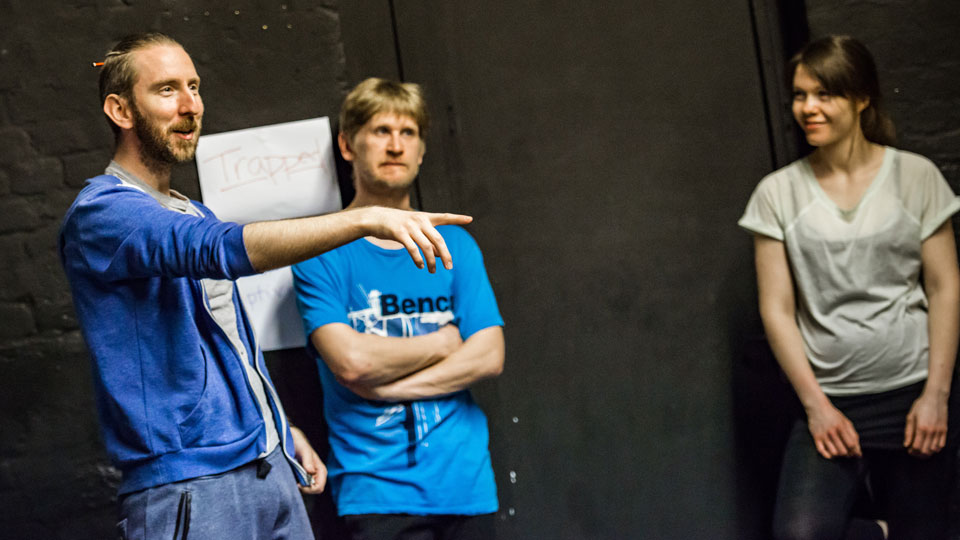 Gavin Harrington-Odedra is the associate director of Lazarus Theatre Company.

He has directed many of their popular re-imaginings of the classics, including Richard III, which saw the colour-blind casting of Prince Plockey in the title part, as well as The Tragedy of Miriam – the first play known to be written by a woman.

We are expecting the same innovative approach to his latest show – Euripides’ classic tragedy The Bacchae. We caught up with Gavin to ask him about his approach to the production, what audiences can expect from it, and to find out why things have been getting steamy in rehearsal!

What can you tell us about your process in directing The Bacchae?

Directing The Bacchae has been a collaborative devising process. The cast and I have been working daily to create material, song, physical theatre and text to add to the backbone of our text. We have come in every day with new images, songs and text to use as inspiration to feed into the production. We work actively, on our feet, to work through sections of the play, starting with the play, and spring-boarding off from that. Every member of the company is integrally involved in the final product. The rehearsal room wall is full of words, images and drawings we have all brought in.

What is your vision for the piece?

At the heart of the play are the Bacchae. Regardless of the machinations of a god, or the fighting of a mortal ruler, The Bacchae are what they are fighting over. They are inseparable from either man’s power. I want us to follow the journey of the Bacchae, see the appeal of being a Bacchae, to want to be one and then question whether we would have been susceptible to their power to be part of their final act.

How do you set about finding ways for Euripides’ text to resonate with contemporary concerns?

Euripides has written a play that is timeless. It illuminates issues within society that are just as relevant now as they were in 400 BCE. Gender equality, freedom and the betterment of society are all aspects of the play for which we can find modern parallels. While we aren’t banging on about religious terrorism in our production, modern parallels can also be easily drawn.

What were you looking for in the actors during the casting process?

It was really important for us to find actors that we could work with, who had positive attitudes, could take an element of inspiration and think about it literally, but also laterally. We have found fourteen such people. Working tirelessly, every day, the cast of The Bacchae work together, create new material and are always smiling and positive while doing it!

Have you found the production developing over the rehearsal process, or are you keen to stick to an approach that you’ve had from its inception?

The more we work through the process, the more we find out. By the very nature of working so closely with fourteen actors, three designers and four artistic, associate, assistant directors and a dramaturge, every time we come to a new part of the play it evolves, develops and benefits from everyone’s input. The designers are being responsive to what is being created in the rehearsal room, and the devising process is being informed by the design. The production is ever-evolving, until we freeze the show on press night.

It’s suggested that there is a sexual edge to the show. What can you tell us about that?

Release is a concept that we have spoken about a lot during the rehearsal process. There are all forms of release, but they can only happen in opposition, or as a reaction to something. Sexual release is something that we have explored while we have been working on the piece, and it certainly will be part of the final piece. Running parallel to this is a sexual freedom or liberation that is explored between the fighting god and ruler. We are currently exploring, in rehearsal, what the god can offer the ruler he can’t get anywhere else. Things have been getting steamy in rehearsal.

What will contemporary audiences take from the classic play?

While The Bacchae was written two and a half thousand years ago, at its core, it is a story that doesn’t go out of date. A story about the importance of equality, recognition, identity, freedom and a cautionary tale about leadership. I believe a contemporary audience will draw parallels, just as the company has, with events that are shaping our local community, country and the world as a whole.

You can see Euripides’ The Bacchae, directed by Gavin Harrington-Odedra, at the Blue Elephant Theatre in Camberwell from 19th April to 7th May. Book now through Ticketweb.