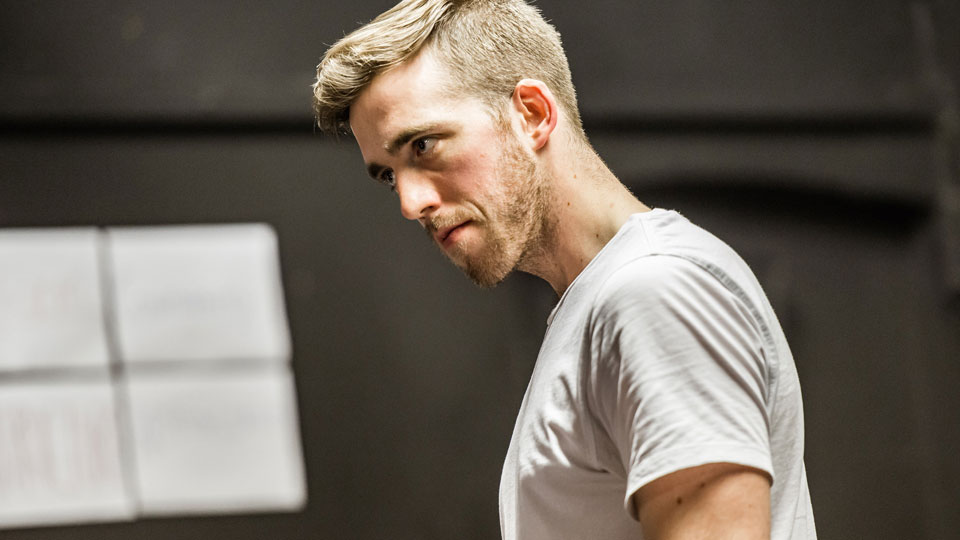 Now it’s time to put actor Nick Biadon – AKA Dionysus – under the spotlight and gather his thoughts on the show.

As a newcomer to Lazarus and a recent drama school graduate who’s going places, Nick was the ideal choice to spill the beans and give us some insight into what we can expect from The Bacchae.

How are you enjoying your first Lazarus production?

It’s been a lot of fun. They’re a great company to work with and really work to create a strong ensemble with their cast.

How do you see the character of Dionysus?

He’s a very contradictory character. What I love about ancient Greek mythology is how ‘human’ the gods are; none of them are perfect, they all have their own issues. So it’s really interesting to explore those contradictory elements in Dionysus. Why is he so desperate to be acknowledged as a god? Does that come from a place of deep insecurity, a sense of truth, or does he just love the praise? I think there’s a bit of both in him. There’s much more going on in his head than what you see on the surface, and it’s fascinating to unpack all of that in rehearsal.

It’s very collaborative – the whole cast has worked through the text as an ensemble, rather than in one-on-one rehearsals, which is great because it means the whole cast is involved and free to offer suggestions. There’s been a lot of devising movement sequences as well, using various images and music as inspiration. It’s very much a show which has been created as a group effort.

Has your view of the character changed at all since working on the show?

I think it changes every day! He’s a complex and contradictory character – but then all well-written characters are. I’m trying to keep an open mind about him through the rehearsal process – every rehearsal it feels like I’ve uncovered something new about his character, which is an awesome feeling.

You graduated from The Oxford School of Drama last year. How are you finding life as a jobbing actor?

It’s tough – you have to put in a lot of hours just trying to find work. That’s partly because I’m self-represented, but at this stage of my career even if I had an agent I would still be putting in a lot of hours myself to find work. That’s something which Oxford are great at instilling into you – they teach you to be proactive, never to assume the work will just happen. I’ve been very lucky to have been working consistently since I graduated.

Do you have any particular inspirations in the theatre world?

I realise in the wake of his Oscar win this probably sounds a bit clichéd, but Mark Rylance is probably the biggest inspiration for me in this career – not just because he’s an fantastic actor; but his attitude towards the world, his humility, openness, warmth, activism. I’d love to just grab a lunch with him and get his opinion on everything.

Did you have a particular interest in Ancient Greek drama before signing up for this show?

Not Greek drama specifically, but I do love the challenge of working with classical texts. I’ve seen some Greek theatre – really enjoyed Hecuba at the RSC last year – but I hadn’t been directly involved in any Greek plays until The Bacchae.

What do you want audiences to take away from this show?

I think at its core The Bacchae is an exploration of the ideas of liberation, the blurring of society’s lines between structure and freedom, and what can happen when power is given to the powerless and downtrodden in society. It’s a play which can and should challenge us to look at our own modern society, and what our limits are. Do we have too much structure in our lives – whether self-imposed, or forced upon us? Is it possible to have too much freedom? What are the implications of either extreme? My hope is that the show will provoke those sorts of questions in the audience.

You can see Euripides’ The Bacchae, directed by Gavin Harrington-Odedra and starring Nick Biadon, at the Blue Elephant Theatre in Camberwell from 19th April to 7th May. Book now through Ticketweb.