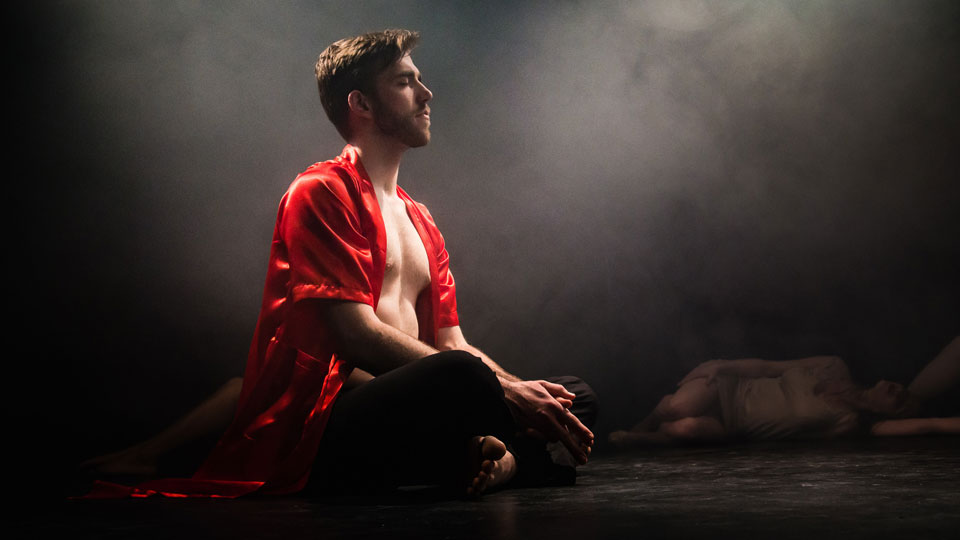 Euripides’ final tragedy – The Bacchae – is pulsatingly brought to life by Lazarus Theatre Company at the Blue Elephant.

The god Dionysus (Nick Biadon) arrives at Thebes in human form, seeking to put to rest any dispute about his divine origins and establish his own cult. However, King Pentheus (Stephen Emery) fails to recognise the deity and has the newcomer arrested, intending to have him stoned. Yet all around him, the Thebans succumb to the new religious worship, abandoning their inhibitions in the process.

The Bacchae plays to all of Lazarus’s strengths. It has a young and energetic cast that brings the necessary sultriness and sexuality to the city under the grip of religious fervour. This is a modern translation of the text, using details about everyday life that could be lifted from our own experiences. There are many other parallels. Whilst the King and his advisors power-dress in grey suits, the Bacchantes – those who have given themselves over to Dionysus worship – are in white, and rather more skimpily clad. The illusion of the King gradually losing control is expertly handled by having the ensemble on stage the whole time – as the Chorus would have been in Euripides’ time – and seeing the king’s men lose their minds to the surrounding hysteria (and their clothes – Ashley Holman’s advisor acting as the first pawn to fall – a journey the actor skilfully plots). Amongst the mortals, only Dionysus is afforded any colour.

The themes of Euripides’ play are expertly brought to the surface, especially the duel nature of worshipping Dionysus: it’s seductive and pleasurable, but can lead to a total loss of reason and inhibition.

The action centres around the conflict between Dionysus and Pentheus, and Nick Biadon makes for a suitably seductive god, and as is the way with gods, he’s more concerned about his own celebrity than with the fates of mortals. Biadon’s cool, calm and louche amorality is neatly counterbalanced by Stephen Emery’s tightly-buttoned and overly-officious Pentheus, concerned for standards of public decency.

Which side your sympathies lie, especially as the play hurtles towards its violent conclusion, will vary, since the play is impressively morally ambiguous. The conclusion is simultaneously horrific and comic. What this production captures is how quickly hysteria takes hold, and the collective madness that religious worship engenders, and its threat to life. What’s especially noticeable in the play is that it’s even more of an examination of female sexuality – something extant religions like to pretend doesn’t exist. The substantial Chorus, made up mostly of female actors, unite in a convincing collective effort in reinforcing that point.

Lazarus’s interpretation is bold and mesmerising. An uneasy atmosphere is captured from the start and sustains throughout. The pace is lightening-fast, with the transitions between scenes blurred; this lends itself well to the piece’s dream-like quality. Harrington-Odedra’s deft direction allows the everyday moments to be addressed directly to the audience. The dissociation adds to the unsettling feeling.

The stylisation of the piece is effective, with movement, music and rhythm combining with the dialogue to tell the story organically, through heightened realism. In fact, it’s so effectively done that it’s only during long soliloquies, where the usually-changing stage takes moments of stillness, that the illusion occasionally wavers – though they do serve to vary the pace and give the audience a moment to reflect.

For the most part, The Bacchae is an absorbing piece of theatre that finds the core of the drama and connects it to our own time. Purists might not like it, but the play survives because it’s themes are timeless, and they are certainly rediscovered here.

The uncomfortable truth The Bacchae raises is: we all enjoy ourselves a bit too much sometimes, and go a little mad…