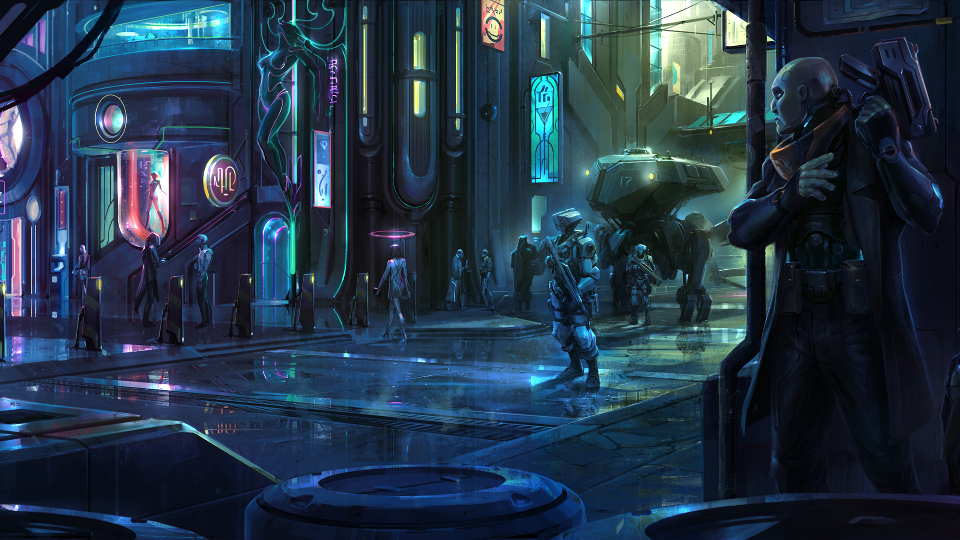 We have fond memories of the countless hours we spent playing Syndicate on the Commodore Amiga. A few years later we were playing the sequel Syndicate Wars and there hasn’t been anything quite like it since. It’s hard to believe that nearly 20 years has passed.

In 2012 a reboot was released that moved the series from an isometric squad-based tactical shooter to a first-person shooter. It was entertaining but didn’t satisfy the need for another Syndicate game.

In the summer of 2013 a project called Satellite Reign appeared on Kickstarter by Brisbane-based 5 Lives Studios. The game was described as a real-time, class-based strategy game, set in an open world cyberpunk city and helmed by Mike Diskett, the lead designer of Syndicate Wars. We got excited and weren’t the only ones as the Kickstarter sailed past its initial funding target and made several stretch goals.

In October 2014 Kickstarter backers got their first taste of the game with an early preview build. In December 2014 the game hit Steam Early Access and that’s the build that we’ve been spending some time with to bring you this preview. The developers stress that it’s still a very early version of the game which means missing features and bugs.

Upon firing up the game it’s the visual style that immediately grabs you. 5 Lives Studios appear to have nailed the cyberpunk aesthetics with environments that look like they’ve been plucked straight out of Blade Runner. The dark dirty streets and alleys are illuminated by large neon billboards and signs.

The areas are large and also feel alive with plenty of citizens going about their business while hover cars fly by. Everything feels a bit intimidating and this is further reinforced by patrolling enemies, electronic barriers blocking paths and surveillance cameras watching for illegal behaviour.

The original Syndicate gave you a squad of four cyborg agents who were all interchangeable. Their differences came from the type of guns they were carrying. In Satellite Reign they’ve gone for a class-based approach which works very well.

You have four different agents at your disposal who can all use weapons. The Soldier is a weapons specialist capable of dealing the most hurt to enemies. Support is able to heal.  The Infiltrator is the stealth operative and finally the Hacker can hack into electronics as well as persuade citizens.

Having classes actually encourages you to split your team up and this brings a huge amount of variety to how you can tackle a given situation. The result is a game that rewards thought and planning. Still if you prefer to send your group in all guns blazing then that’s fine too. There’s no right way to play which brings immense replay value.

An example early on is that one of your squad is being held captive at a police station. You could choose to wait for the police to open the barrier and attempt to free them by force. You could hack and sneak your way in the front door. You can sneak around the back and then enter unseen via the roof or even zip-line across from an adjacent building.

To help you plan your moves one of your agents has a special ability that gives you a kind of x-ray view. When in this view you can identify things like which terminal to hack to open a door, disable a camera or turn off an electricity generator.

If your plan goes wrong or you do get spotted you have a short time to fix things. If not then enemies will call in backup and then it can get really tough. If an agent dies you can pay to have them respawn immediately or wait a short time for a free respawn.

Moving around is as simple as clicking and your agents will walk there. Double-clicking will get them to sprint but this is limited thanks to a stamina bar. Clicking near cover will get your agents to take cover allowing them to remain unseen or reduce the damage taken during a firefight. The safest way to get around is to put your weapons away.

If you find a new weapon you can give it to an agent to use right away or send it off to be researched first. Research costs cash but is worthwhile as you can then use the weapon in future. Should you opt to use it instead and get killed then it will be lost.

In its current form there’s a lot of things missing but Satellite Reign appears to be on the right track. It’s full of potential and we can’t wait to see how the game progresses over the coming months. Fans of Syndicate and Syndicate Wars should definitely keep an eye on the game but it should appeal to anyone who loves Sci-Fi or tactical games.