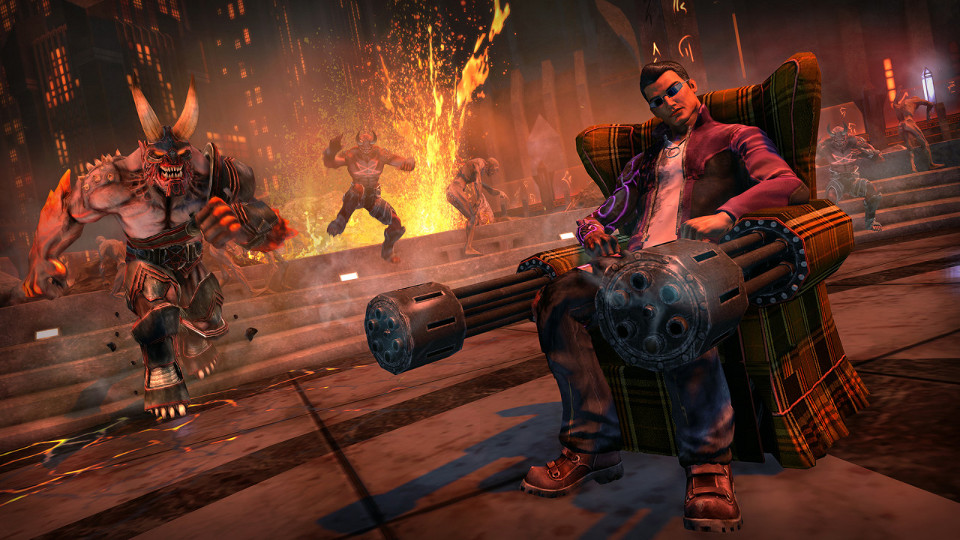 If you’ve ever wanted to shoot the Devil in the face then you’ll want to check out the new standalone expansion that is Saints Row: Gat out of Hell. Playing as either Johnny Gat or Kinzie Kensington get ready to tear apart Hell in a quest to save the leader of the Saints’ soul. Historical icons, old friends, older enemies, a talking gun, a full length musical number, and a whole lot of other shenanigans all await you.

Saints Row fans have been getting excited for months and now you can see what happened when Steelport’s own tame racing driver STAG, took the fully-loaded armchair for a spin through the streets of London. Some say it was welded together in the depths of Hell by Satan himself, and that its upholstery was woven together from Johnny Gat’s discarded navel fluff. All we know is it’s Armchair-a-geddon. Deep Silver brings to life Saints Row: Gat Out of Hell’s most deadly, sloth-enly weapon in a one-off special Gat Gear.

Gat out of Hell is available now for new and last gen consoles as well as PC.

Also available from today is Saints Row IV: Re-Elected for Xbox One and PS4. This features the full game on next-gen for the first time with all the DLC packs plus the new Gat out of Hell expansion.

Check out the official Saints Row website for more information.

In this article:Deep Silver, Gat out of Hell, Saints Row