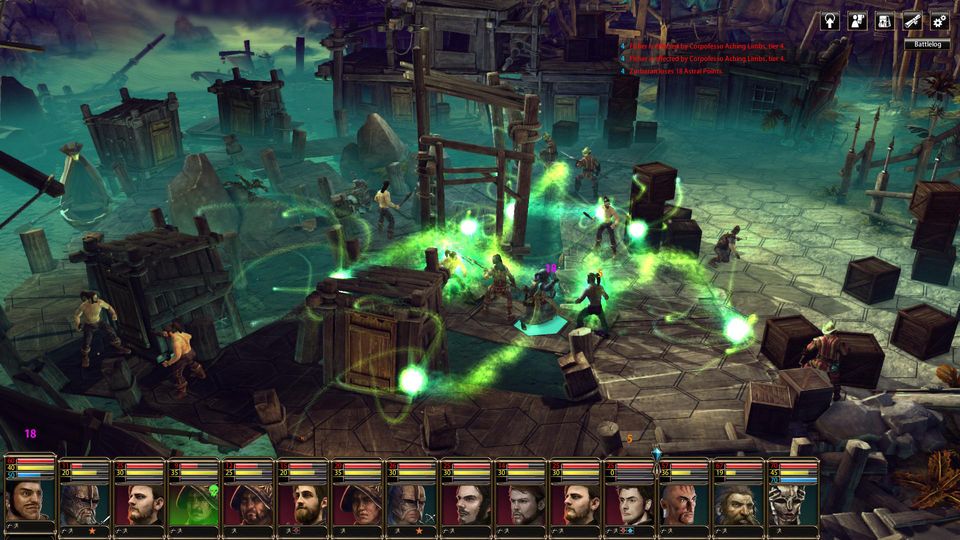 Just a year ago Daedalic Entertainment released Blackguards their first attempt at a Strategy-RPG. The game was based on the popular pen and paper role-playing game The Dark Eye. The game proved to be popular but there was much room for improvement. Now with the release of the sequel, Blackguards 2, we get to see if they’ve managed to successfully build upon the first game.

Three years have passed and the Vanquishers of the Nine Hordes have parted ways. The focal character this time around is Cassia of Tenos. She begins the game having been locked into a labyrinthine dungeon. Her captors expect her to succumb to the poison of the hordes of massive spiders or go insane from solitude.

Four years pass before she manages to escape and she leaves her prison a changed woman. Not in a good way though. The spider bites have left her with a deformed appearance and she’s has indeed gone rather mental. Between battles you even get the option for her to talk to herself. An evil Cassia leaves hell-bent on overthrowing the ruling Marwan to claim the Shark Throne for her own.

To do so she needs help and must track down the surviving Blackguards from the first game. These are the dwarf Naurim, the mage Zubaran and forest-man Takate. Life has been tough for them since the first game and each has their own problems.

Blackguards 2 again follows The Dark Eye ruleset but this time the developers have simplified things a bit. You get the most freedom with how Cassia develops and can pick and choose her talents, spells and abilities however you wish. This allows you to essentially build your own class and adds a lot to the replay trying out different builds. The other area that’s had plenty of tweaks is the combat.

Like the first game combat takes place on hexagonal grids and is turn-based. The different locations can be rather large and there are often simple puzzles to overcome. For example there are levers to pull that open up paths to progress or gain you access to treasure chests for better loot.

Blackguards 2 gives you more freedom to place your characters at the start of a battle. A most welcome addition thanks to the new rules is that your attacks are much less likely to miss. This greatly speeds up the combat compared to the first game. However due to the size of the battles, slow damage and their turn-based nature each fight can still take a very long time. There is no saving mid-battle either so you can find yourself having to replay the tougher fights over and over until you get them right which can be frustrating.

Despite the speed the combat is one of the best parts of the game. It’s a lot of fun and when you find a strategy that works on a particularly tough fight it is incredibly satisfying. Combat can be very varied thanks to melee and ranged attacks plus offensive and defensive spells. Cover and line-of-sight have also been much improved over the previous game.

As you progress your decisions shape the story and you get to choose your route across the world map. You need to battle to take control of towns that give you access to things like resources or special items. Once you have taken control you will still find times you need to go back and defend a town to prevent it from falling back under enemy control.

Overall Blackguards 2 is a better game than the first. It’s clear that Daedalic have listened to feedback from the community and have worked hard to improve the areas of complaint of the first game. There’s a great story here and nice variety of scenarios to challenge even advanced players. It’s still not for everyone but if you prefer to think and take time developing a strategy you should check it out.