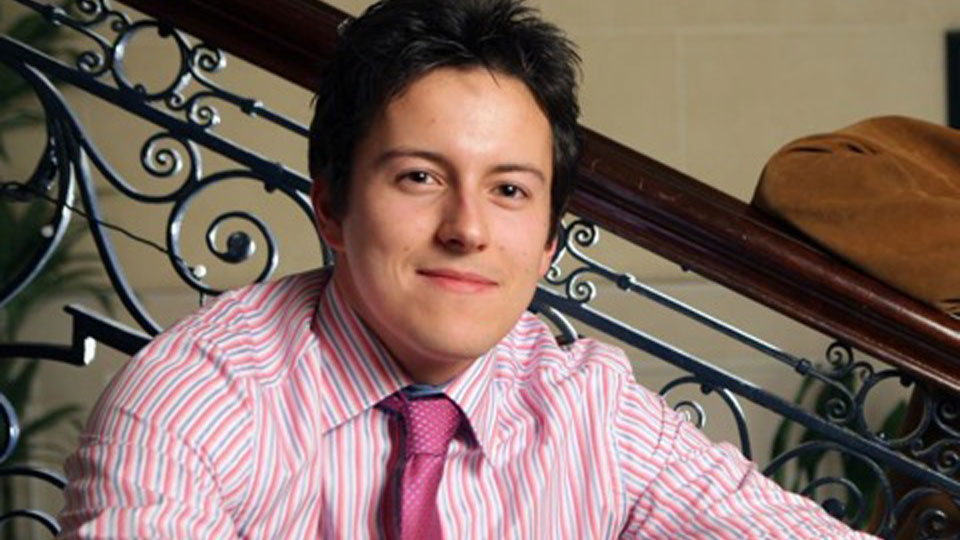 Adam Hughes is a playwright whose career so far has attracted significant acclaim. His play about football hooliganism in the 1980s, Marching On Together, is brought to the stage in February at the Old Red Lion Theatre.

Originally from Leeds himself, Adam’s play examines the notorious Service Crew gang, and the reasons why many football fans of the 1980s turned to hooliganism as an outlet for their anger.

We caught up with Adam to find out a bit more about where the ideas for Marching On Together came from. Along the way we learned about his writing process, what his hopes are for the impending London production, and how he came to win the coveted Kenneth Branagh drama award.

Why did you decide to tackle the subject matter of 80s British football hooliganism?

For me, football hooliganism has been well-documented in the past on both stage and screen. What I wanted to do was really look at the mentality behind football hooliganism and why people felt the need to not only defend their club but use such violent actions in the process. Being from Leeds, I was always aware of the notorious Service Crew who were once the most feared gang in England. After doing some research, it appeared that they disseminated in the mid 80s- partly due to the rise of a new crew but also partly due to the miners strikes which saw communities ripped apart and priorities changing. I found this fascinating and when I looked at the 1984/85 season in which this took place, I noted that this oversaw the highest number of arrests for football related violence and culminated in a 15 year-old Leeds fan being crushed to death in Birmingham and the Valley Parade fire in Bradford which killed 56 people. So much happened during this time that I felt it would make a really interesting yet ultimately very important drama.

What was the writing process like, and how long did it take to complete a polished draft?

I first began writing ideas down for the script in December 2013. My first play had just finished its UK tour and I was keen to start my next piece. After reading about that particular season, all of the events that took place and the ultimate repercussions these had on the region, I just knew I had to write a story about it. Therefore over just a week I managed to rattle out the first draft. Since then we’ve had several readings and gone through numerous drafts, mainly through the feedback I’ve received from creatives yet also due to the comments I’ve had from ex-hooligans who lived during this time and were part of this world I was trying to depict. With the most recent drafts, I’ve been lucky enough to work with Joshua McTaggart, the play’s director, who has really pushed me as a writer to get the most out of the script. I now feel it’s at the strongest it has ever been- so it’s only taken just over a year! Saying that, a script is never really finished and even in rehearsals I’m finding myself chopping and changing certain parts.

How did BackHere! Theatre come to stage the London production?

I was very keen to get the play on in London, particularly at a renowned fringe venue. I had a fantastic director in place and we had begun talks with the Old Red Lion, one of my favourite venues in the capital. That’s when I was introduced to Helena Doughty and her theatre company BackHere! They had produced a couple of showcases at the Old Red Lion and were keen to put on a full length production. Helena is also a huge football fan (Nottingham Forrest unfortunately) and had been on the lookout for a football themed play for sometime now. We all met and immediately hit it off and have all been pushing the show forward ever since.

Are you hoping that Marching On Together will be shown in your native Leeds? If so, what sort of reaction do you think there would be to the show?

Following the London run we are taking the play up to Leeds. Although we couldn’t secure a theatrical venue in the city for this current run, it was vital for me that a Leeds audience got the chance to see it. I was also determined that ex-hooligans and former miners got a chance to attend a show as this is essentially a story about them and they need to hear it been told. That said, I appreciate how these particular groups are not necessarily theatre goers and so we decided to bring the show to them by performing it in working men’s clubs and community halls. I hope the reaction will be a positive one, not only due to the extensive research I’ve undertaken but the fact that, for one of the first times, we’re addressing this extremely important era in British history and giving a voice to a certain demographic who have been silenced until now.

What sort of audiences do you think will get the most from Marching On Together?

As the play is set in a very specific part of the country and in a very specific world then obviously a Leeds audience will have the greatest connection to it. It is a play about the city and many who see it will not only remember the events featured but perhaps assimilate to the situations faced by our characters. That said, although football and violence play a large role in the piece, this is ultimately a play about belonging and wanting a sense of identity which I believe anyone can relate to. As the play was the only UK Finalist in last year’s Burbage New Writing Prize (out of more than 400 entries) this gave me huge confidence that its appeal extends far beyond a regional audience and that the story we are telling could resonate with anyone who came to see it.

What do you think the clash between football fans and government in the 1980s revealed about British society?

I think it revealed a huge lack of understanding. What made me want to write this play was not to glorify violence by any means but to look at the mentality of a football hooligan and ask what drove them to such behaviour. From my own research and speaking to people who were part of this culture, I’ve come to realise that it was a sense of frustration and hopelessness. For many men during this time, fighting before a match and defending their team was all they had and it gave them a sense of purpose and belonging. At a time when pits were being closed, factories shut and deprivation on the rise, many felt they had little choice and used football as a means of releasing their angst. What the play does is try to give a voice to these people and understand why these events happened, rather than shy away from them and resign them to a dark part of British history.

What do you think has changed in the game in the last three decades that accounts for the near-eradication of hooliganism?

On a basic level, I think the amount of police and CCTV that has since been introduced has made organised football violence near impossible. After the game between Birmingham and Leeds in 1985 (which features in the play), many believed that Leeds would get thrown out of the football league due to their actions and virtually destroying the stadium. This actually acted as a turning point and from this moment on matches were much better managed and the heightened security meant that violence was at a minimal. That said, I also think a change in attitude has contributed to this fall in violence. Many of those fighting were doing so out of frustration, living in worlds of deprivation where there was a lack of jobs and a greater lack of hope. For many during this time, such as the play’s protagonist Macca, the only place in which they felt any sense of identity was on the terraces and so this provides solace for many who had very little else.

Your other pieces suggest a strong interest in social justice. Would you say that’s true?

I think that whenever I write something I do so because it interests me. There’s no set agenda and I certainly don’t go out thinking ‘I’m going to change the world with this play’. I just think the issues I’ve dealt with before such as racism, divided communities and immigration are issues that are so relevant in the modern world yet are ones which many people are too afraid to confront. What theatre, film and television should be doing is looking at the issues which affect people and use their different mediums to tackle this. I think as writers we have such a privileged position of being able to make comment on the world around us and how we perceive it. As it is other people who will be hearing this, it’s important for me to have something relevant and interesting to say – and a lot of that does come out of writing about social issues.

Tell us about winning the Kenneth Branagh drama award. Is it your proudest recognition to date?

Winning the Kenneth Branagh Award was an amazing experience, not only due to the high volume of entrants and the judges who chose the winning scripts, but also working with a great group of actors and creatives. There were actually three winning scripts, all of which were very different and all had something to say. Mine was about Eastern European immigration to the UK (I’m of Ukrainian descent) whereas the other two were about the morality of journalists and tree preservation! It was just an amazing feeling seeing packed audience after packed audience in Windsor every evening and people coming up to me saying how much they enjoyed the show. Also, being a huge fan of Kenneth Branagh himself, it was great to win something which he personally sponsored!

Do you have any other projects currently in development?

At the moment, my main focus is Marching On Together but there are a couple other ideas bubbling beneath the surface! I have written a play about the horrendously unfair housing system in London and the effect this has on people living in the capital which is currently going through a couple of drafts. I am also working on an idea about Eddie Cochran, the American rock ‘n’ roll sensation who sang ‘C’mon Everybody’ and ‘Summertime Blues’ whose life was tragically cut short at just 21 after a car crash in Bath. There are others too but they are all floating around in my head at the moment – I need to find a day or two in which I can pull them all down!

Advertisement. Scroll to continue reading.
In this article:Adam Hughes, Marching On Together, Old Red Lion Theatre