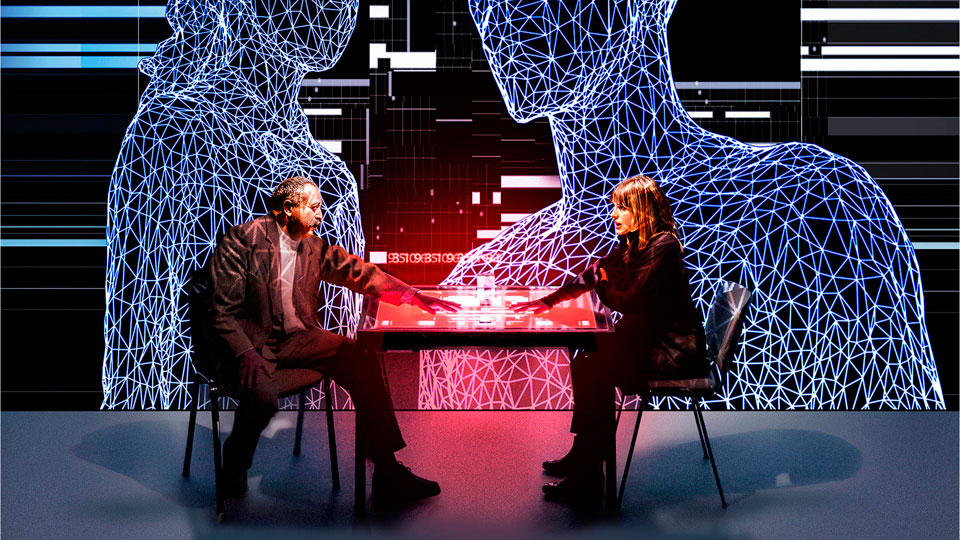 The Nether will host post-show Q&A talks during the play’s West End run at the Duke of York’s Theatre. With members of the creative team, as well as further guests from the worlds of theatre, the media, gaming and technology industries, there will be 6 Q&A talks after selected performances of the play. All Q&A talks are free for The Nether ticket holders.

The Nether offers complete freedom – a new virtual wonderland providing total sensory immersion. Just log in, choose an identity and indulge your every desire. An intricate crime drama and a haunting thriller set in the year 2050, The Nether follows an investigation into the complicated, disturbing morality of identity in the digital world, and explores the consequences of making dreams a reality

Previewing at the Duke of York’s Theatre from 30th January and opening on 23rd February, Jennifer Haley’s critically acclaimed, multi-award-winning play The Nether, directed by Jeremy Herrin, is booking for 12 weeks only to 25th April 2015.

How do you write a play about the ethics of online existence? How do you stage a virtual world? Playwright Jennifer Haley and director Jeremy Herrin discuss The Nether and the process behind creating Headlong and the Royal Court’s production of the show, in a discussion chaired by Royal Court Literary Manager, Christopher Campbell.

Are games a dangerous and anti-social addiction? Might gaming be able to save the world? How is gaming culture changing the kinds of stories that we tell and how we engage with them? Join playwright and gamer Lucy Prebble (ENRON, The Effect) and Iain Simons (Director of the GameCity Festival and co-founder of the National Videogame Archive) to explore how gaming has developed from Pong to Destiny and to discuss where gaming might take us in the future. Chaired by Royal Court Literary Manager, Christopher Campbell.

How do we create a theatre for the digital age? Is technology fundamentally changing the ways in which we engage with and make performance? Matt Adams (Artistic Director, Blast Theory) and David Sabel (Head of Broadcast and Digital at the National Theatre) discuss how digital technology is revolutionising performance, chaired by Headlong’s Artistic Associate, Sarah Grochala.

How do you police the entire internet? And how much of the web do we know about? Join Susie Hargreaves (Chief Executive of the Internet Watch Foundation) and Jamie Bartlett (Author of The Dark Net) to discuss how our relationship with the web is constantly changing. Chaired by Headlong’s Artistic Associate, Sarah Grochala.

Is the web changing us? How does spending time online affect our brains? Can you spend too much time online? Journalist, Liat Clarke (Associate Editor of Wired Magazine) and Spencer Kelly (Presenter of BBC News’s Click) discuss the implications.

How is technology changing the way that we stage and design a production? What new possibilities might digital technology open up for theatre designers in the future? From the Deus Ex Machina of Ancient Greek Theatre to the invention of the electric lantern in the late nineteenth century, technology has had a huge impact on the ways in which we stage a performance. Olivier Award Winning Set Designer Es Devlin (Chimerica, American Psycho, The Nether) and Luke Halls (I Can’t Sing!, Olympic and Paralympic Closing Ceremonies, Master and Margarita) lead a panel of experts to discuss how digital technology is revolutionising the world of theatre design.

See thenethertheplay.co.uk for more details and to book.

Advertisement. Scroll to continue reading.
In this article:Duke of York's Theatre, Jennifer Haley, The Nether