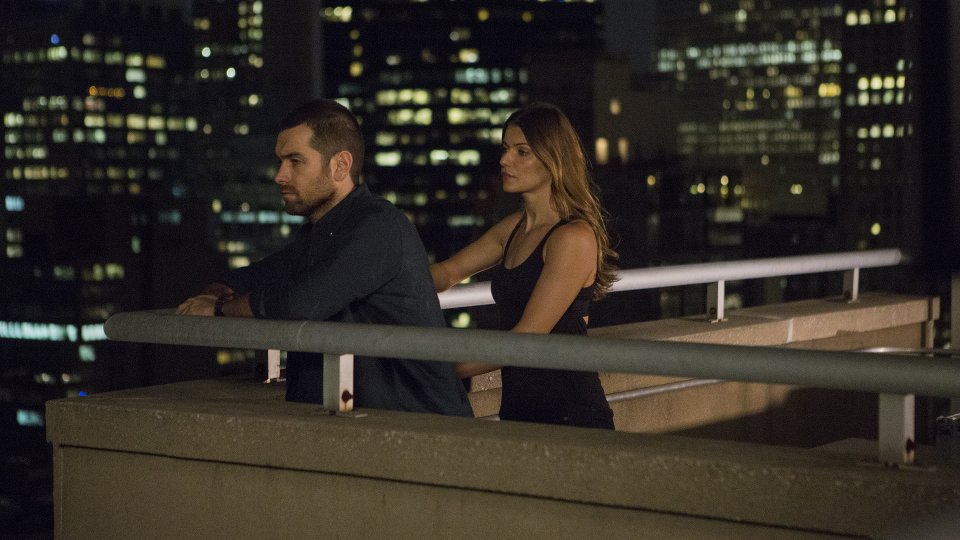 Just when Ana (Ivana Milicevic) thought it was safe to return to her normal life with her family, she was thrown a bit of a curveball that she simply couldn’t ignore.

If you haven’t seen the latest episode of Banshee and don’t want any spoilers we suggest you stop reading now. If you have seen it and want to relive all of the action then keep reading.

The penultimate episode of Banshee’s second season opened with Job (Hoon Lee) having a close call with Rabbit (Ben Cross) and his men in New York. Last week saw Lucas’ (Antony Starr) sidekick discover Rabbit’s location and tonight he attempted to take him out on his own. Big mistake.

After being held captive briefly, Job managed to break free taking down several men in the process. His escape was short-lived when he was hit by a taxi and left for dead on the road. Luckily for Job he was rushed into hospital and nursed into a stable condition.

Whilst Job lay in the hospital Lucas enjoyed another romp with Deputy Siobhan (Trieste Kelly Dunn) whilst Ana rekindled her relationship with Gordon (Rus Blackwell). Lucas was interrupted by a phone call telling him that Job was in the hospital and he headed straight to Ana’s interrupting her sex session with Gordon. Obviously Gordon wasn’t thrilled to have Lucas at his door and even less thrilled when Ana told him she had to go with Lucas to put an end to Rabbit once and for all. A tense stand-off took place with Gordon holding a gun pointed at Lucas but everyone left unscathed.

On the way to New York Ana and Lucas agree that they won’t leave until either Rabbit or they are dead. Unbeknownst to them Detective Julius Bonner (Reg E. Cathey) was slowly putting the pieces together about Agent Racine’s (Zeljko Ivanek) disappearance and the whereabouts of Rabbit.

Ana and Lucas arrived at the hospital where Job was and an epic fight broke out with Rabbit’s men who were trying to get to Job first. Many shots were fired and lots of blood shed but Ana and Lucas managed to rescue Job and escape from the hospital just as Detective Bonner was closing the building down whilst they searched for the shooter. Too late he realised that Lucas had slipped past him.

After getting Job to a safe place, Ana and Lucas prepared to do battle with Rabbit and end things once and for all.

Elsewhere in the episode Kai (Ulrich Thomsen) spent time in jail and had an emotional visit from his mother. Whilst he was getting used to life on the inside, Burton (Matthew Rauch) was tying up lose ends for him starting with the murder of Sharp (Joseph Sikora) who attacked Emmett’s (Demetrius Grosse) wife in the last episode. He then went after stripper Juliet (Maya Gilbert) who had been wrongly implicated as an informant for the police. Rebecca (Lili Simmons) got to her first and helped her escape leaving Burton furious. Burton then told Rebecca he didn’t trust her.

Things continued to get tense in the Kinaho tribe following Alex’s (Anthony Ruivivar) intimidation tactics in cahoots with Kai. George (Gil Birmingham) paid him a visit and made it clear that he wasn’t going to take the dirty tactics lying down.

The season 2 finale of Banshee airs Monday at 10pm on Sky Atlantic HD.