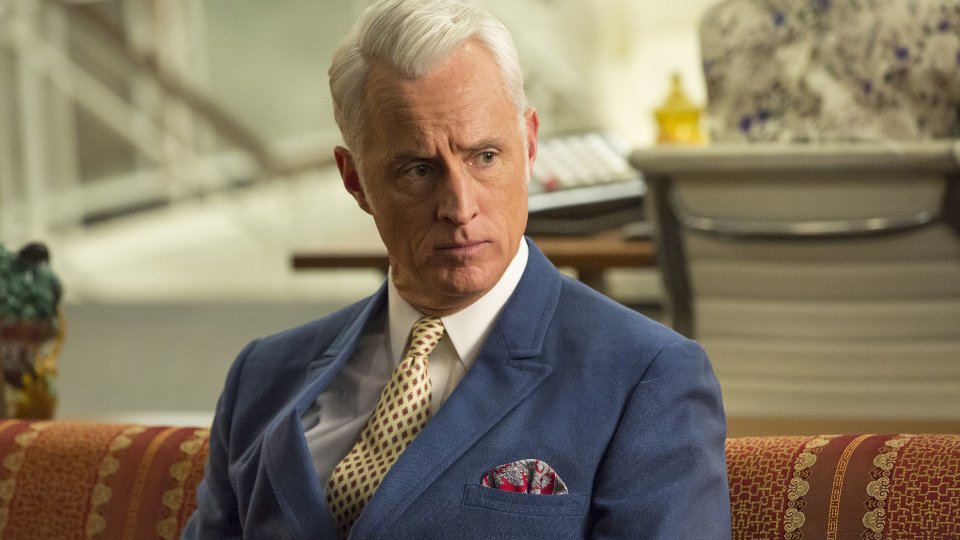 Mad Men reached its mid-season finale tonight with the seventh episode of the final season.

If you haven’t seen the latest episode of Mad Men we recommend you stop reading so we don’t spoil anything for you. If you have seen it keep reading to relive all the action.

The latest episode of the hit AMC drama was given the backdrop of the 1969 Moon landing as it ended its run for 2014. The episode opened with Bert (Robert Morse) watching footage on the news before moving on to a rather odd sequence which saw Ted (Kevin Rahm) scare the life out of Sunkist by cutting the engine out of the plane he was piloting with them in it mid-flight. This led to complaints from Sunkist and a furious Pete (Vincent Kartheiser) screaming down the phone at him. It seems that Ted has lost the passion for life and advertising.

The fallout from Don’s (Jon Hamm) impromptu appearance at the Commander Cigarettes meeting finally unravelled as Lou (Allan Havey) told Jim (Harry Hamlin) that they hadn’t landed the account. This led to an exchange between the two that was less than friendly with Jim referring to Lou as a ‘hired hand’ before clarifying they owe him nothing. Nice.

Peggy’s (Elisabeth Moss) renewed relationship with Don got a lot of focus tonight starting with the two bouncing off one another during a dry run for the Burger Chef pitch. Pete cut the pitch short feeling that they were ready enough to win Burger Chef over. Speaking of Peggy when she returned home there was an attractive handyman in her apartment who gave her his number. Could romance be in her future?

Back at SC&P Meredith (Stephanie Drake) broke the news to Don that he was going to be fired due to breach of contract. She saw the moment as an opportunity to try her luck and kissed him. He refused her advances and soon the hysterical weeping secretary was leaving the office and back at her desk. Don on the other hand was pretty angry and stormed into Jim’s office demanding an explanation. Causing a huge fuss he then called all of the partners into the middle of the office to get to the bottom of the situation. It soon became clear that Jim had acted without input from anyone else but Joan (Christina Hendricks) decided to back him up any way. Fortunately for Don no one else backed Jim up so he’s safe for now.

Returning to Peggy, the frustrated copywriter was home choosing what to take with her on the trip to pitch for Burger Chef. She bounced ideas off Julio (Jacob Guenther) who surprised her by revealing he and his mum were moving. Peggy has clearly become attached to him and a tender moment saw her hug him and assure him that everything would be ok. We sense that long-kept baby secret is finally going to come out before the show waves goodbye.

As Don prepared for the trip he called Megan (Jessica Pare) to update her on the goings-on at SC&P. It was soon revealed that their marriage was over but Don promised to take care of her regardless. Are Don and Megan really over? We may be in a minority but we hope not. Following Don’s outburst in the office Roger (John Slattery) and Bert had a frank exchange with Bert telling Roger that he didn’t consider his business partner to be a leader. Ouch! He also said he only didn’t vote against Don because he was a leader and leaders don’t turn on their people.

Peggy, Don, Pete and Harry (Rich Sommer) set off on their trip to Indianapolis for the Burger Chef pitch and Don let down his guard with Pete telling him that things with Megan were over. The night before the pitch they all settled in their hotel room to watch the Moon Landing with all of the other characters also watching the historic event. Roger was interrupted by a phonecall that brought the news of Bert’s death. Roger went straight to the office to mourn his business partner and friend and was met by an upset Joan and a straight-to-business Jim saw it as an opportunity to get rid of Don and speak to clients about the future of the firm. Roger called Don to tell him the news about Bert and to warn him that Jim was after him.

With that knowledge in his head, Don went to see Peggy and told her she would be taking the lead in the Burger Chef pitch. At first she didn’t believe him so he explained that Jim was trying to get rid of him and if he goes Peggy will be left with nothing unless she wins the business.

The next morning Roger had a meeting with McCann Erickson about buying out SC&P so they operate a subsidiary of the company. The only stipulation is that both Don and Ted must agree to the deal. Tricky!

The Burger Chef pitch went swimmingly with Peggy rising to the challenge after a stellar introduction from Don. It was revealed later in the episode that she did indeed win them the business. Score to Peggy!

Back in New York Don returned home to find Roger on his doorstep. Once inside the door of his apartment Roger revealed his plan to Don telling him that this would be a way for him to keep his job and increase his wealth. The news was then delivered to the other partners which caused a bit of division amongst the ranks (for a change). Joan and Pete saw dollar signs, Ted put up resistance but was eventually ground down and even Jim decided to vote in favour of it. Poor Harry on the other hand was informed he wouldn’t be a partner because he missed the deadline.

We also got a little bit of Betty (January Jones) this episode as she had a friend over with her children. Sally took a shine to her new male companions influenced by the oldest but planting a kiss on the youngest. She’s a little minx that one isn’t she?

As the episode ended the office came together to remember Bert and Don had a dream-like vision of Bert performing a musical number in the office aided by the secretaries. A perfect send-off for an eccentric and much-loved character.

Mad Men returns for the second half of its final season in 2015.