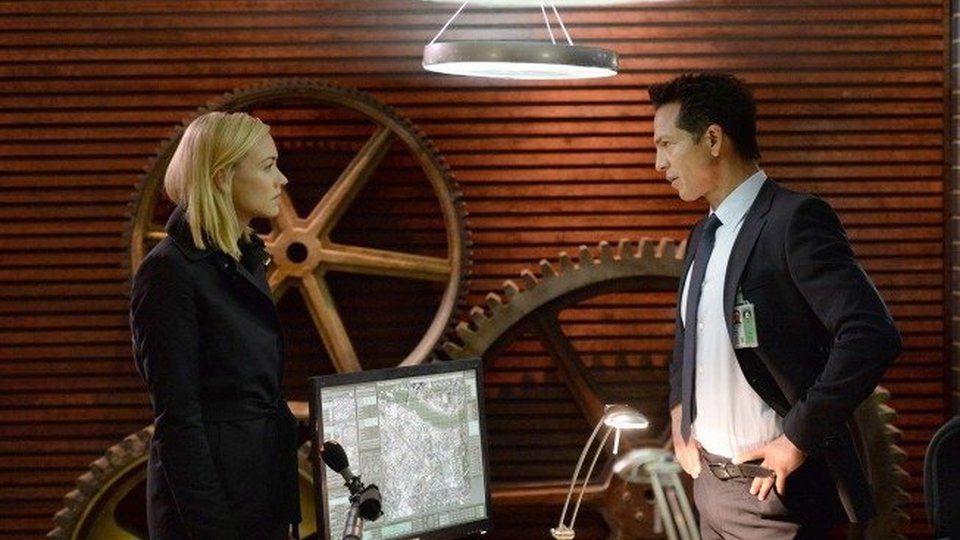 The tension is really notching up on 24: Live Another Day and tonight’s episode proved to be the most exciting of the season to date.

If you haven’t seen the latest episode of 24: Live Another Day then we suggest you stop reading now so we don’t spoil anything for you. If you have watched the episode then keep reading to relive the action.

There were definitely a few OMG moments during the tonight’s episode of 24: Live Another Day as the action picked up in the Comms Room of the US Embassy where Jack (Kiefer Sutherland) had put his trust in Kate (Yvonne Strahovski) to get the flight key data to President Heller (William Devane). The events of the episode took place between 3:00pm and 4:00pm.

The marines gave Kate a dressing down in the Comms Room telling her that they would be filing a report against her for interfering. They then pressed Jack to give them the flight key before turning their suspicions to Kate who denied she had it. Jack then began to put up resistance giving Kate the opportunity to slip away with the flight key and get in contact with Chloe (Mary Lynn Rajskub). The computer whizz told Kate to get to a 4G network so she could finish uploading the data from the flight key.

Leaving the US Embassy with Erik (Gbenga Akkinagbe) in tow Kate revealed that she the plans to her surprised colleague. Once they got in their car, Kate re-established communication with Chloe and completed the upload from the flight key. With the data now in Chloe’s possession, she turned to Adrian (Michael Wincott) for help spotting the over-ride key for the drones. He quickly pulled out the pattern which Chloe then sent over Kate who forwarded them to Jordan (Giles Matthey) at the CIA to confirm. With Navarro (Benjamin Bratt) by his side, Jordan confirmed that what Chloe had found was proof of the drone attack planned against the President.

As we knew all along Jack was right! Kate then had the pleasure of being the one to tell the President the news as a worried Audrey (Kim Raver) and Mark (Tate Donovan) looked on. General Coburn (Colin Salmon) insisted he would need to check the information Kate had provided and upon asking for the drones to be grounded he soon discovered she was indeed correct. Margot (Michelle Fairley) had already taken control of several drones, which they could do nothing about.

The President of course wasn’t happy about this turn of events after just about getting himself back in the good graces of the Prime Minister (Stephen Fry). With the realisation that an attack was about to take place on London, President Heller insisted that he speak to Jack as soon as possible.

Upon her return to the CIA Kate was told by Navarro that she was off the case and he asked her to file a report about the events at the US Embassy before she left. Did anyone really think Kate would go anywhere? Well if you had any doubt we’re sure it evaporated when a video from Margot was sent to the CIA where she explained the reasons behind her attack leading to the revelation that the President himself had been kept in the dark about drone that killed her husband and several innocent children.

With news of the attack now circling, Open Cell decided to pack up their laptops and leave but Chloe refused explaining that she wanted to help the CIA. Adrian reminded her of all the things they’d done to her but Chloe was determined to help Kate stop the attacks.

President Heller came face-to-face with Jack for the first time this season and asked him if he had any more information about Margot and her potential whereabouts. Jack said he knew an arms dealer she’d been involved with but refused to give over the name asking instead if he could be put back in the field. President Heller refused Jack’s request.

Back at the CIA Jordan discovered a traceable IP address from the video Margot sent out and identified a location. Navarro quickly assembled a team and headed out into the field with them to take Margot down.

Next it was the moment we’ve all been waiting for. Audrey and Jack came face-to-face for the first time since he left her in a catatonic state in season 6. A tearful Audrey seemed relieved to see Jack and the two almost shared a little kiss there didn’t they? Jack used the opportunity to explain that the things he’s been accused of are true but that it was ‘complicated’. He then asked her to leave the room which she did quickly. Are the seeds set for her to ditch duplicitous Mark?

Smelling a dirty rat, Kate called Chloe who agreed that she thought they’d found the location too easily. Turns out they were both right as Margot had intercepted Navid’s (Sacha Dhawan) attempt to stop the attacks by purposely leaving a security buffer turned off. Margot’s quick-thinking son Ian (Liam Garrigan) redirected the IP so it would lead the CIA to the wrong location and pointed a drone right at it to kill everyone.

Chloe found the redirect and informed Kate who got in contact with Navarro urging him to extract his team from the premises. Navarro acted quickly but the drone hit the location before they could get clear leaving the fates of many characters up in the air and the CIA, President Heller and the Prime Minister speechless as they watched on in horror.

As the episode drew to a close Margot decided to put an end to Navid’s wavering allegiance. Earlier in the episode he stupidly told Simone (Emily Berrington) what he had done and that he’d left evidence under the floorboards to try and prevent her from being dragged into the line of fire when the authorities arrived. Of course she didn’t keep that from her mother and watched on as her husband was shot in the head by mommy dearest.

24: Live Another Day continues at 9/8c Mondays on FOX in the US and at 9pm Wednesdays on Sky 1 HD in the UK.