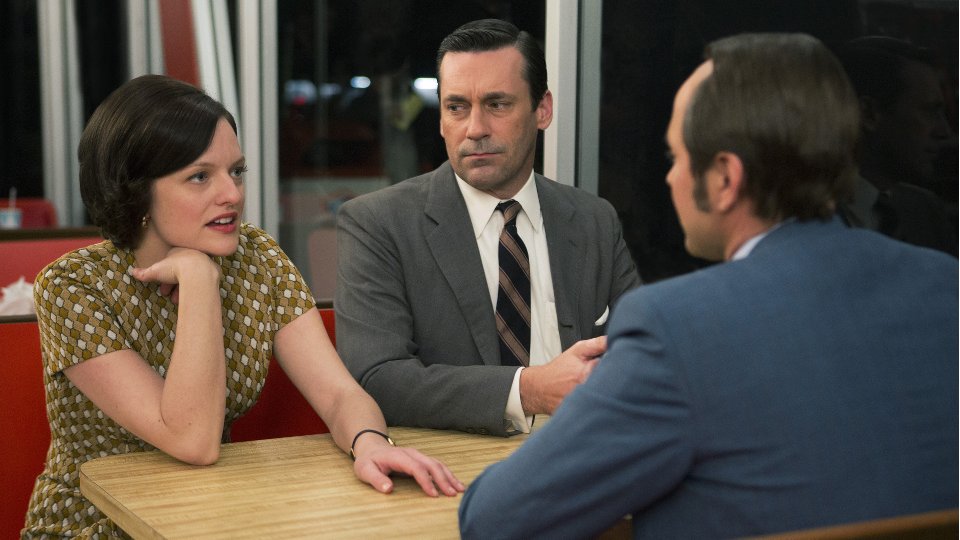 Mad Men pulled out its A game tonight and put its best foot forward in an episode that oozed pure brilliance and class.

If you haven’t seen the latest episode of Mad Men and don’t want any spoilers we suggest you stop reading now. If you have seen it and want to relive all the action then keep reading.

The rise of Don Draper (Jon Hamm) continued in tonight’s episode of Mad Men as he started to repair the bridges he’s burned with Peggy (Elisabeth Olson). The two have had a rocky couple of seasons and now Peggy is Don’t boss effectively relations have been even more strained. After seemingly Peggy hit a home run during the Burger Chef pitch to Lou (Allan Havey) and Pete (Vincent Kartheiser), it’s suggested that Don be the person to front the main pitch to the client with Peggy as his second in command. Realising she had no choice in the matter, Peggy decided to put the idea to Don as if it were her own. After exchanging pleasantries Don planted the seed that the pitch was good but it could be better and suggested another angle.

A furious Peggy then went into overdrive trying to better the pitch which drove her to have a ranty phonecall with Stan (Jay R. Ferguson) and an even less pleasant one with Don. Despite Don having Megan (Jessica Pare) home to try and rebuild their relationship, he still went into the office and spent time working with Peggy on the pitch. Initially frosty the atmosphere soon thawed and the Peggy and Don magic came back. The result was a new and improved pitch and a frank conversation between the two that saw Don reassuring Peggy about her achievements, her career and her life. The scene ended with a touching moment where the two slow danced to My Way with Don giving Peggy an affectionate kiss on the head.

Bob Benson (James Wolk) was back this episode (HURRAY) and with him came quite a few surprises. Firstly he was accompanied by two executives from Chevy one of which, like Bob, was trying to suppress his sexuality but ended up being locked up after trying to ‘fellate a police officer’. Bob posted his bail and two had an awkward conversation about their sexualities. Bob also learned that Chevy were going to drop SC&P and move operations in-house but that he would be offered a job at Buick to soften the blow.

That little nugget didn’t take long to be spread elsewhere when Bob told Joan (Christina Hendricks) during a Sunday date. That wasn’t the only surprise he had for her. He also asked her to marry him and kissed her. When Joan told him he shouldn’t be with a woman, Bob proposed a marriage of convenience where he could hide his sexuality (especially if he was going to work at Buick where it wouldn’t be accepted) and she would have a partner and father for her child. Joan refused the proposal telling him she’d rather be alone than live without love in her marriage.

Joan then told the partners about losing Chevy which prompted Jim (Harry Hamlin) to suggest they publicise their new IBM computer and make Harry Crane (Rich Sommer) a partner to show they are a forward-thinking company ahead of the times. Joan and Roger (John Slattery) were against the proposal but everyone else voted in favour.

Pete was also back in New York this week. We mentioned earlier that he was involved with the Burger Chef pitching decisions but he also brought Bonnie (Jessy Schram) with him. After promising her all kinds of things, Pete pretty much ignored her to spend time with his daughter and wait around for Trudy (Alison Brie) to return home so he could confront her about her supposed feelings for him. When he didn’t get the response he was after he shoved a bottle of beer into a nicely decorated cake and stormed off. Interesting to note that Bonnie returned to L.A. on her own with Megan on the same flight also flying solo.

The episode came to a close with Pete, Peggy and Don in Burger Chef as Peggy walked them all through the new pitch. As the camera panned out and you saw Peggy’s narrative unfolding on screen with your own eyes it was all so magical we almost let out a little tear.

Mad Men concludes the first half of its final season at 10/9c Sunday on AMC in the US and at 10pm Wednesday on Sky Atlantic HD in the UK.