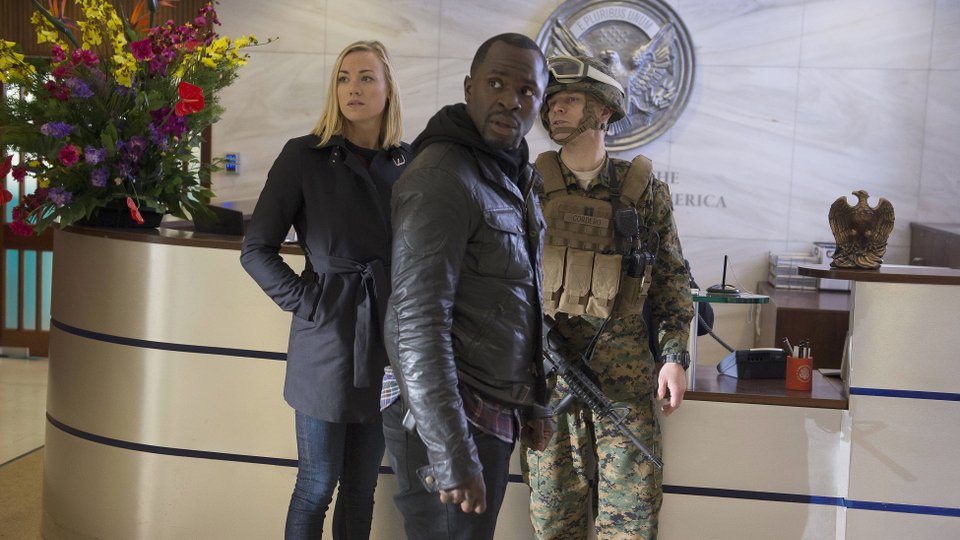 Tonight was 24 at its absolute best with the fourth episode from the limited series 24: Live Another Day and what an action-packed hour of TV it was.

If you haven’t seen the latest episode of 24: Live Another Day and don’t want any spoilers we recommend you stop reading now. If you have seen it and want to relive the action then keep reading.

Last week’s episode closed with Jack Bauer (Kiefer Sutherland) storming the U.S. Embassy determined to prove that Tanner (John Boyega) was innocent and that Margot Al-Harazi (Michelle Fairley) was planning a terrorist attack on London by commandeering various drones place in and around the country. With the help of Chloe (Mary Lynn Rajskub), Jack managed to take down a security guard, steal his jacket and pass, and make his way up to the room where Tanner was being held.

As he stepped through the door he realised he wasn’t alone so he took out the guard with Tanner too. A terrified Tanner was initially resistant to speak with Jack but once Jack explained that he believed him and wanted to prove his innocence he was all ears. Jack told him that he needed Tanner’s flight key so he could take the data off it and find the proof that the drone had been hacked. Tanner handed it over and Jack left after quickly reassuring him that everything would be fine.

Jack then tried to get out of the building but realised courtesy of Chloe that he was running out of options as the marines and Kate (Yvonne Strahovski) closed in on him. Determined to get the data to from the flight key to Chloe, Jack asked her to direct him to the Comms Room which was located in the basement of the building. Once in there he took three hostages, for leverage, and locked the room whilst he attempted to upload the data from the key and send it to Chloe.

One small problem – the data on the key had to be unencrypted before it could be sent. After screwing Jack over last week Adrian Cross (Michael Wincott) decided to step up and help. He sent Jack software to unencrypt the key so he could then send it over. Having to buy more time Jack got one of the hostages to open the door whilst he shot a few rounds and closed it again showing them he meant business. Throughout the ordeal Jack reassured his hostages that he had no intention of hurting them.

With the data now unencrypted Jack started the upload but the speed was painfully slow meaning he had to buy himself as much time as possible. As Jack was buying time Kate and Erik (Gbenga Akinnagbe) were outside the room trying to think of how to get to Jack. After thinking him to be a danger, Kate was starting to come round to the idea that Jack might be telling the truth about the potential terrorist attack. She called Navarro (Benjamin Bratt) to try and get access to Jack but was told that President Heller (William Devane) was calling to speak to Jack and she could be patched in on that.

The President and Jack had a tense conversation which included little in the way of pleasantries. Jack explained what he was doing and why and reminded Heller that he’s never lied to him previously. Following the call a furious Audrey (Kim Raver) argued with husband Mark (Tate Donovan) who was quick to try and convince President Heller that Jack was lying and plotting something. Audrey stuck up for Jack and said as she knew him better than anyone else she believed him to be telling the truth and urged them to listen. President Heller considered it but sided with Mark giving the marines the go-ahead to storm the Comms Room.

Back in the Comms room Jack prepared the room for a blast as he heard the marines wiring up a bomb onto the door. As he was taking shelter with his gun in hand, he was shocked to discover Kate trying to enter the room through the air vent in the ceiling. After taking a shot at her he allowed her to enter the room and she told him she believed he was telling the truth. When the door was blasted open Kate was protecting Jack and told the marines he was her prisoner now and they were to leave him alone. Way to kick ass Kate!

Away from the central storyline quite a bit happened too. President Heller delivered a successful speech to Parliament which seemed to quieten down some of the detractors that heckled him last week. We also learned that CIA tech Jordan (Giles Matthey) has feelings for Kate which Navarro believed were clouding his judgement.

Chloe spent most of the episode helping Jack but there was time for a little development in her relationship with Adrian. Following his attempt to get Jack arrested last week, Chloe was wary of her new boyfriend/boss and kept her eye on him.

What about Margot we hear you say? Well it seems that she’s more cruel and psychotic than we thought after she forced Navid (Sacha Dhawan) to agree to pilot the drones by having her own daughter Simone (Emily Berrington) tortured in front of him and her finger hacked off. She proved she wasn’t messing about and ended any thoughts he had of running away. The episode closed with Navid sat infront of screens showing the drones across the world that he was going to be piloting.

24: Live Another Day continues at 9/8c Mondays on FOX in the US and 9pm Wednesdays on Sky Atlantic in the UK.