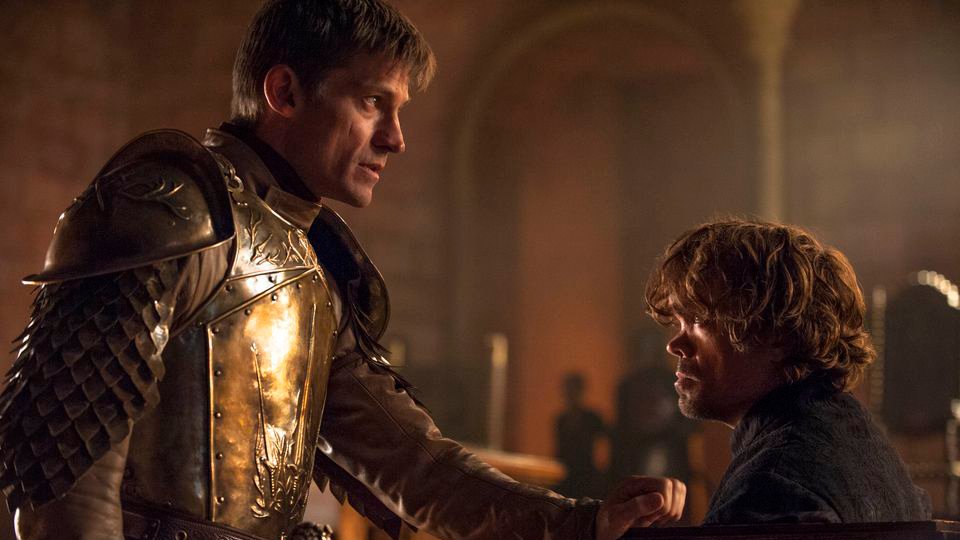 Last week’s episode First of His Name was the halfway point of season four.

The Laws of Gods and Men is the sixth episode of the season. It is written by Bryan Cogman with Alik Sakharov in the director’s chair for the first time this season. The episode opened up with Stannis (Stephen Dillane) and Davos (Liam Cunningham) aboard a ship bound for Braavos to ask the Iron Bank for a loan.

Stannis is impatient and seems to think the visit is a waste of time. He is frustrated when the bank makes him wait and very annoyed when they decide to turn down his loan request. Fortunately Davos steps in with a speech on why they should change their minds and it works. Davos then tracks down the pirate Salladhor Saan (Lucian Msamati) at a whorehouse and tells him they will head back to Dragonstone.

At the Dreadfort we see Yara Greyjoy (Gemma Whelan) arriving with her Ironborn soldiers. She’s there to save her brother Theon/Reek (Alfie Allen) from the torturous Ramsay Snow (Iwan Rheon).

The group make it into the Dreadfort under the cover of darkness and Yara shows she can handle herself in combat. They quickly make their way to Theon without much resistance but are shocked to find him in a cage. After Ramsay’s abuse Theon has been left completely broken and refuses to be rescued as he thinks he is being tricked.

Before they can take him away Ramsay shows up with a group of his own men. There’s a short fight and each side takes losses before Ramsay unleashes the hounds and Yara is forced to retreat while leaving her brother behind. We hear her say to her men that Theon is dead.

As a reward for his loyalty Ramsay gives Reek a bath. It’s obvious that Reek is a complete mess and completely under Ramsay’s control. Reek is told that they need to capture Moat Cailin and that he will need to pretend to be Theon.

The action shifts to a farmer tending to him goats while his young son plays. It seems an unusual scene until one of Dany’s (Emilia Clarke) dragons appears in search of food.

Dany is now sat upon the throne as ruler and Queen of Meereen. She’s taking visits from supplicants and learning that ruling isn’t all that fun. There are a couple of hundred people waiting to see her. One is the farmer who has lost his goats to her Dragons. She promises to repay him with three times their worth which makes him happy.

Next up is Hizdahr zo Loraq (Joel Fry) with a request to take his father down from where he was crucified to give him a proper burial. Dany listens to the man and grants his request. We feel that we’ll be seeing him again.

In King’s Landing Lord Tywin (Charles Dance) is holding a meeting with the Small Council. Present are Cersei (Lena Headey), Oberyn Martell (Pedro Pascal) and Varys (Conleth Hill). The ever-knowing Varys updates them on happenings around the world including sightings of The Hound in the Riverlands and of Dany’s conquests across the Narrow Sea.

The rest of the episode is dedicated to the trial of Tyrion Lannister (Peter Dinklage) for the murder of King Joffrey. We’re almost as nervous as Tyrion looks as his brother Jaime (Nikolaj Coster-Waldau) has him shackled and brought to the throne room.

Tommen leaves Tywin in charge of the trial. Tywin is to be one of the judges along with Oberyn and Mace Tyrell (Roger Ashton-Griffiths). Tyrion stands in the dock and pleads not guilty before a series of witnesses are called upon to give evidence against him.

The trial hears from Ser Meryn Trant (Ian Beattie), Grand Maester Pycelle (Julian Glover), Cersei and Varys. All tell tales based around Tyrion’s past actions but twist his words against him. Despite his best efforts Tyrion is unable to argue and it’s quite clear that he’s been set up to take the fall.

During a recess Jaime goes to beg his father to spare Tyrion. Without really thinking he offers to leave King’s Landing to rule Casterly Rock which his father previous wanted him to do. Tywin accepts the offer and tells Jaime that as long as Tyrion is found guilty and pleads for mercy he will be spared and set to the Wall to join the Night’s Watch.

Before the trial resumes Jaime tells Tyrion about the deal. The next witness is a shocker as Shae (Sibel Kekilli) takes the stand. She’s obviously still hurting after Tyrion forced her to leave in order to keep her safe. She says a lot of untruthful things and bends the truth to embarrass and hurt Tyrion.

It’s actually one of the most emotional scenes yet in Game of Thrones as Tyrion tries to stop her with a simple “Shae, please don’t”. It proves all too much for Tyrion and he says he wants to confess. To the surprise of everyone he confesses to being guilty. Not for the murder of Joffrey though, guilty of being a dwarf.

In a fabulous outburst he turns on those present. He tells them that he didn’t poison Joffrey but wishes that he did and how he saved King’s Landing against Stannis. Finally he demands a trial by combat!

Tyrion used a trial by combat at the Eyrie when he escaped the Moon door. At that time he used Bronn to fight for him. Will he use Bronn again? Maybe fight himself? Who will the opponent be?

We’re also interested to see what happens when Reek is made to pretend to be Theon. Will he be able to do it? Will it remind him who he really is?

Let us know your thoughts on The Laws of Gods and Men in the comments below as well as your hopes for the season. No spoilers though please!

Advertisement. Scroll to continue reading.
In this article:Game Of Thrones, The Laws of Gods and Men