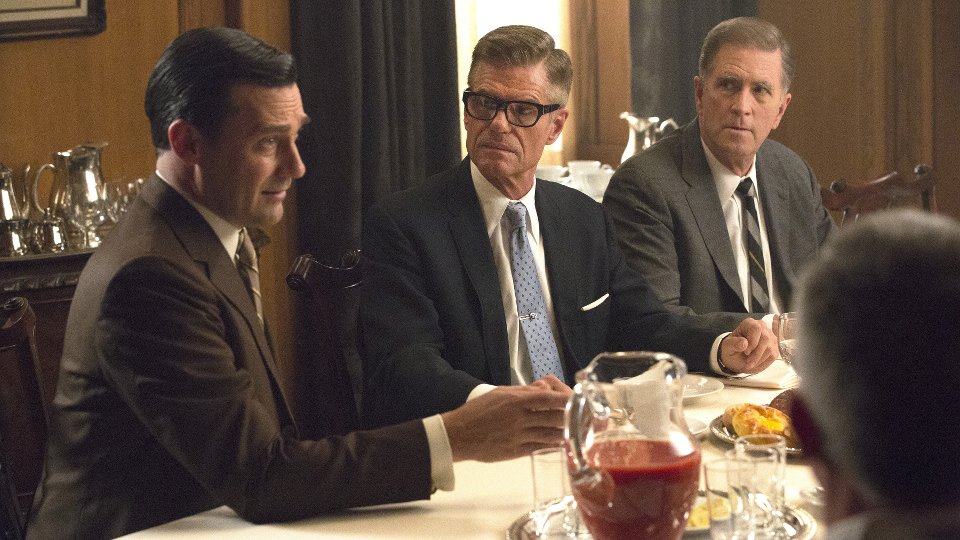 Mad Men is truly playing with our emotions this season and we’re not entirely sure what’s going to happen next.

If you haven’t seen the latest episode of Mad Men and don’t want any spoilers we suggest you stop reading now. If you have seen the episode and want to relive all of the action then keep reading.

The episode opened with Don (Jon Hamm) sharing an exchange in the lift with Peggy (Elisabeth Moss) and it seems the two have learned to get along once again. Now that Don is playing the game and working his way back up, he’s doing what’s asked of him with minimum fuss.

Whilst trying to keep his head down, Don unfortunately became a victim of Lou’s (Allan Havey) power trip when Stan (Jay R. Ferguson) discovered Lou’s cartoon aspirations and made him the laughing stock of the office. This was addressed very publicly in a creative meeting with Lou telling everyone they couldn’t go home until they delivered ideas he was happy with.

That caused a problem for Don who told Megan (Jessica Pare) that he would visit her in L.A. after receiving a call out of the blue from his ‘niece’ Stephanie (Caity Loitz). When he handed his work in and asked to be excused, Lou played hardball forcing him to stay before deciding hours later that Don didn’t really need to stay. It was clear that Lou was just being an arse and enjoyed lauding his power over Don.

Over in L.A. Megan agreed to look after Stephanie, who was heavily pregnant, until Don arrived. It all proved a bit too much though for the current Mrs Draper who began to suspect that Don may have had a history with his ‘niece’ outside of what she already knew. Despite insisting nothing had happened and that her relationship with Don was purely due to her late aunt (whom Don married years back when he assumed the Don Draper identity). Megan decided to hand the girl some money and usher her out the door in a rather rude and forceful way claiming Don wouldn’t approve of Stephanie being up the duff whilst the father is in prison.

When Don eventually arrived he was disappointed to discover that Stephanie was gone and didn’t suspect anything untoward thanks to Megan’s white lie. Megan meanwhile was busy planning a house party with her friend Amy (Jenny Wade). When the party came round Don soon tired of watching Megan flirting with other men and saw the surprise arrival of Harry (Rich Sommer) as a perfect excuse to ditch the party.

Heading to a bar, Don and Harry shared a little bonding moment and Harry revealed that Lou and Jim (Allan Havey) were plotting to oust Don and re-enter the cigarette market – something they couldn’t do with Don in the agency following his open letter criticising the tobacco industry a few seasons back.

Don returned home and was confronted by a tipsy Megan who invited Amy into their bed for a threeway. Despite not being ‘in the mood’ Don went along with it anyway and the three woke up to an awkward conversation. Amy hurried off quickly, Don decided to fly back to New York and Megan was left fuming that her little plan didn’t work out the way she’d hoped.

On arrival back in New York, Don crashed Jim and Lou’s meeting and promised to walk away from SC&P if that would convince Commander Cigarettes to sign with the agency. He then flipped the tables, and a big middle finger to his SC&P colleagues, by saying they would need his years of experience in the industry in a bid to make sure his future was safe. He seemed proud with his move but Jim and Lou were fuming.

The most bizarre storyline of the episode was that of Ginsberg (Ben Feldman) who has always edged on the crazy side and tonight left reality with a one-way trip to crazy town. Throughout the episode he launched into a series of bizarre diatribes about the affect the new office computer was having on him. Whilst working on the weekend, Ginsberg mistook a secret exchange between Lou and Jim as a sign that they were having an affair.

Shocked by his ‘discovery’ Ginsberg rushed over to Peggy’s where his bizarre behaviour continued and he tried to forced himself on her when she woke up from a nap. Clearly alarmed Peggy ushered Ginsberg out of her apartment as he was raving about the computer making everyone gay.

Later in the episode he appeared in Peggy’s office to apologise for his behaviour and handed her a box. Upon opening it, Peggy discovered Ginsberg’s nipple that he believed to be the valve that allowed him to get over the strange affects of the computer. He also told her he had feelings for her, which led Peggy to gently convince him to sit down before she called for help and he was hauled off tied down to a gurney. Is this the last we’ll see of him?

Elsewhere we got a glimpse of Betty’s (January Jones) life continuing to fall apart. An open house tour to get to know their neighbours resulted in Betty trying (and failing) to speak about politics and the Vietnam war which enraged Henry and he basically told her to talk only of women things in public and leave the politics to the men. It looks like that relationship could have run its course.

As if that wasn’t enough for Betty, Sally (Kiernan Shipka) arrived home with a suspected broken nose after a silly incident at school. The youngster served a nasty side of sass at her mother before stomping off to her room. Later Sally had a rare moment with her brother Bobby (Mason Vale Cotton) where she shared her feelings about Betty and her controlling nature.

Mad Men continues at 10/9c Sundays on AMC in the US and at 10pm Wednesdays on Sky Atlantic HD in the UK.