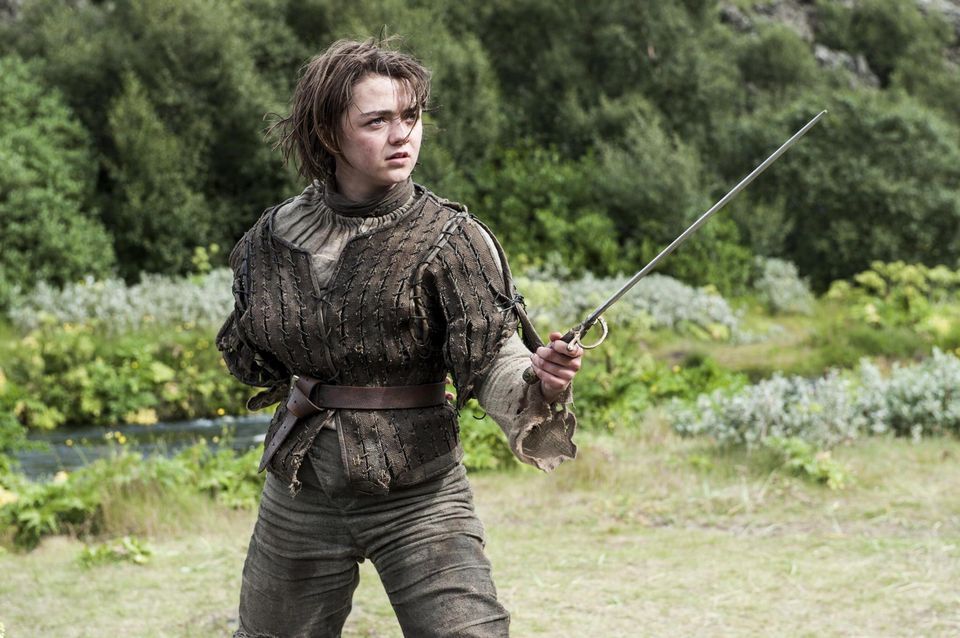 Last week’s episode Oathkeeper set plenty of things in motion for the rest of the series. We can’t believe we’re now at the half way point of the series already.

First of His Name is written by showrunners David Benioff and D. B. Weiss with Michelle MacLaren in the director’s chair. The episode wasted no time and opened up at King’s Landing with Tommen Baratheon (Dean-Charles Chapman) being crowned as the new King. Tywin (Charles Dance) is an impatient chap so he’s obviously keen to get the coronation out of the way so he can get back to scheming.

At the reception Margaery (Natalie Dormer) and Tommen make eye contact across the room before exchanging a cheeky smile. That is until Cersei (Lena Headey) spots Margaery and steps into their line of sight. She heads over to Margaery to talk about Joffrey and tries to get an idea of what Margaery has planned. It seems she’s no fool though as she pretends she hasn’t even considered marrying him.

Cersei seems to be hinting that it would be a good thing as Tommen is only a boy and that he will need help. Is Cersei playing into Margaery’s hands or does she have other plans?

Across the Narrow Sea we join Dany (Emilia Clarke) meeting with her council which includes Jorah (Iain Glen), Barristan (Ian McElhinney) and Daario (Michiel Huisman). Daario’s forces have captured Meereen’s Navy which gives her a fleet of 93 ships she could use to sail to attack King’s Landing. It seems a good time for her to strike with her 10,000 troops and her advisers appear optimistic.

Jorah as concerned as ever thinks that while she might take King’s Landing but that she isn’t powerful enough to take the Seven Kingdoms. He also tells her that the slave cities of Astapor and Yunkai, that she liberated, have again fallen and are out for revenge. She decides that she will stay and rule where she is for now.

In the Vale of Arryn we see Lord Baelish (Aidan Gillen) and Sansa Stark (Sophie Turner) arrive at the Bloody Gate. He makes her wear a hood and conceals her true identity for her own safety until they make it to the Eyrie. There they are welcomed by Sansa’s crazy aunt Lysa (Kate Dickie) and her son Robin (Lino Facioli).

Lysa wants to marry Lord Baelish as soon as possible but he doesn’t seem too keen (We can’t blame him!). Later that night Lysa presses Sansa to find out if she has seduced Lord Baelish. Sansa eventually seems to convince her that this is not the case and is told that once Tyrion is executed she will be free to marry Robin.

Back in King’s Landing Tywin and Cersei discuss events and make plans for the wedding of Tommen and Margaery as well as her own wedding to Ser Loras. Can we take more weddings so soon? They also talk about the Iron Bank and how they need to keep the Tyrells on side to keep the bank happy.

In the Riverlands Arya (Maisie Williams) and the Hound Rory McCann) are settling down for the night. She’s annoying him by saying the names of all the people she plans to kill and finishes with his name. The next morning the Hound awakes to find Arya gone but finds her sword training nearby. He makes fun of her fighting style and laughs as she fails to pierce his armour.

On the Kingsroad we join Brienne (Gwendoline Christie) and her new squire Podrick Payne (Daniel Portman) on horseback as they make their way towards the Wall. Podrick is obviously struggling with the normal tasks asked of a squire. Later on he manages to set fire to a rabbit as he doesn’t know to remove the skin before roasting it. After hearing his tale of killing a man to save Tyrion, Brienne lets Podrick help remove her armour which cheers him up.

Beyond the Wall we see Locke (Noah Taylor) scouting Craster’s Keep. The mutineers are up to their usual tricks assaulting the women. Locke finds where Bran (Isaac Hempstead-Wright) and his party are being held before returning to Jon Snow (Kit Harington) and the Night’s Watch men. Jon decides to attack at sundown.

Back where Bran is being held captive we see Karl (Burn Gorman) and his men arrive wanting to rape Meera (Ellie Kendrick). Jojen (Thomas Brodie-Sangster) manages to distract them by telling them of a vision he’s had.

Before they can hurt the group the Night’s Watch attack and chaos ensues. Locke sneaks to where Bran is being held with a plan to capture and kill him as per his orders. Bran is helpless until he manages to warg into Hodor (Kristian Nairn), break the gentle giant free and use him to snap Locke’s neck.

Bran spots his brother Jon but the group worry Jon will interfere with their journey north. Instead of making contact they slip away to free the direwolves Ghost and Summer. Meanwhile Jon goes after Karl and they have an epic sword and dagger fight. Karl stabs Jon in the leg and it looks like game over for Jon before one of the women stabs Karl in the back. As he turns on her Jon finishes him off with a sword right through the back of his head and out of his mouth. Go Jon!

Ghost tracks down Rast, the man who was taunting him, and kills him. He then returns to Jon who is delighted to see him. Before leaving Jon asks the surviving women of Craster’s Keep to return with them for safety but they refuse. Instead they just ask that they help burn the dead and the Keep to the ground.

We’re gutted that Jon and Bran didn’t get to reunite and more than a little worried for Sansa. We were also hoping to see Dany make a move on King’s Landing and sad that there were no dragons again this week.

Let us know your thoughts on First of His Name in the comments below as well as your hopes for the season. No spoilers though please!

Advertisement. Scroll to continue reading.
In this article:First of His Name, Game Of Thrones