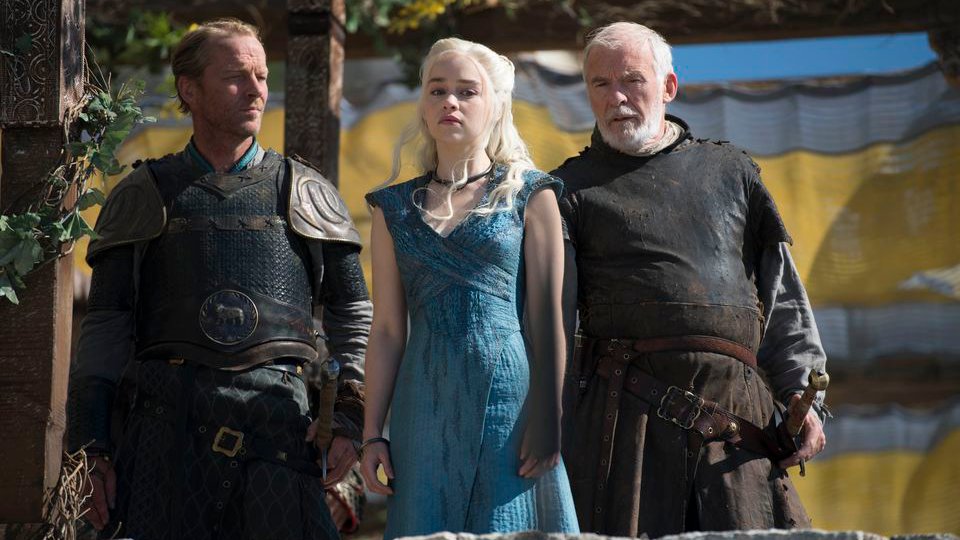 Last week’s episode Breaker of Chains showed us the fallout after the purple wedding and set things in motion for the rest of the series. With an idea of where each of the major characters are heading this season we were really looking forward to the fourth episode.

Oathkeeper is written by Michelle MacLaren with Bryan Cogman in the director’s chair. The episode opened up across the Narrow Sea near Meereen with Missandei (Nathalie Emmanuel) teaching Grey Worm (Jacob Anderson) to speak the common tongue. They discuss their past and how they each became slaves.

Later that night a group of Unsullied, led by Grey Worm, head into Meereen via the sewers. They find a group of Meereen’s slaves discussing Daenerys (Emilia Clarke) and what will happen to them if they do as she asks. Grey Worm provides them with weapons and they turn on their Masters.

We aren’t actually shown much of the battle; instead we jump forward and see Dany in charge of Mereen the next day. Ser Barristan (Ian McElhinney) suggests she shows mercy to the surviving Masters but instead she orders them to be nailed to posts the same as they had done to slave children in the past.

The action then moves to Kings Landing where we see Jaime Lannister (Nikolaj Coster-Waldau) continuing his sword retraining with Bronn (Jerome Flynn). It seems that Jaime is improving and just as he appears to be winning Bronn grabs his golden hand and uses it to smite him across the face. Bronn takes the opportunity to push Jaime to visit Tyrion (Peter Dinklage) and explains that Tyrion isn’t to blame for Joffrey’s death.

Jaime listens and agrees before heading off to visit his brother in the dungeon. They chat about the murder and how Cersei (Lena Headey) will stop at nothing to have Tyrion and Sansa (Sophie Turner) executed.

We then catch up with Sansa who is on a ship to the Vale of Arryn with Lord Baelish (Aiden Gillen). They discuss the murder of Joffrey and it’s confirmed that he had a part to play in the murder. Lord Baelish also confirms that Tyrion was not responsible but that Sansa had unknowingly done her bit. Looking surprised she listens as he tells her about the necklace and the poisonous gem it contained.

Back at the gardens in King’s Landing we see Olenna Tyrell (Diana Rigg) giving advice to Margaery (Natalie Dormer). Olenna is to leave King’s Landing for Highgarden. She explains to Margaery that she should get close to Tommen (Dean-Charles Chapman).

At Castle Black, Jon Snow (Kit Harington) is using his experience to teach the men fighting techniques to combat the Wildlings unorthodox style. Acting Lord Commander Ser Alliser Thorne (Owen Teale) puts a stop to it by suggesting Jon get back to steward duties.

Jon makes friends with a new recruit called Locke (Noah Taylor) who obviously knows how to fight well. What Jon doesn’t know is that Locke is one of Roose Bolton’s men on a mission to wipe out the Stark boys.

Returning to King’s Landing we see Cersei drinking wine again and still upset with Jaime. She refuses to listen to his pleas of Tyrion’s innocence and wants him to ensure the safety of Tommen. Cersei also wants to know if he will track down Sansa and return with her head.

Elsewhere we see Margaery following Olenna’s instructions by sneaking into Tommen’s chamber. She talks to him about marriage and getting to know each other better. She stops short of seducing him but it’s obvious that Tommen is smitten. Before leaving she explains their meetings must be kept secret.

Instead of following his sisters orders Jaime decides to uphold his oath to Catelyn Stark. He gives his Valyrian-steel sword to Brienne (Gwendoline Christie) along with brand new armour and Podrick Payne (Daniel Portman) as her squire. He tells her to use the sword to protect Sansa. She agrees and names the sword Oathkeeper. Podrick is given Tyrion’s axe. As they leave it’s an emotional scene and we wonder if Brienne and Jaime will meet again?

Back at Castle Black, Thorne realises the popularity of Jon Snow. He agrees to let him take a group of volunteers beyond the wall to take out the mutineers at Craster’s Keep. Jon makes a powerful speech and several of his brothers agree to join him. Jon hopes he will find Bran and Rickon when he gets there.

We then get our first glimpse of Craster’s Keep where we see the mutineers raping the women for fun. A mutineer called Karl Tanner (Burn Gorman) is seen drinking wine from the skull of Commander Mormont. At the same time he brags about himself and his past.

A woman walks in with the last baby of Craster’s to be sacrificed as a gift to the gods. He tells one of his men named Rast to take the baby and feed the beast. The baby is left in the woods alone and the beast turns out to be Jon Snow’s direwolf, Ghost.

Nearby we see Bran (Isaac Hempsteam-Wright), Hodor (Kristian Nairn), Jojen (Thomas Brodie-Sangster), Meera (Ellie Kendrick) and direwolf, Summer. They hear the baby crying so Bran wargs into Summer to investigate. As Summer he comes across Ghost before falling into a trap.

The group rush to save the direwolves but are instead captured by the mutineers and brought before Karl. Hodor is surrounded and taunted before getting stabbed in the leg. During interrogation Jojen has one of his seizures before Bran tells Karl his true identity.

The episode ends with a rare glimpse of the White Walkers. We see one riding a dead horse to collect the baby before returning to some mysterious place. After placing the baby on an altar a White Walker approaches it. It reaches out to touch the baby and as it does so we see the baby’s eyes turn ice blue like the other White Walkers. We’re not quite sure what this means yet but we’re intrigued to find out more.

Let us know your thoughts on Oathkeeper in the comments below as well as your hopes for the season. No spoilers though please!

In this article:Game Of Thrones, Oathkeeper