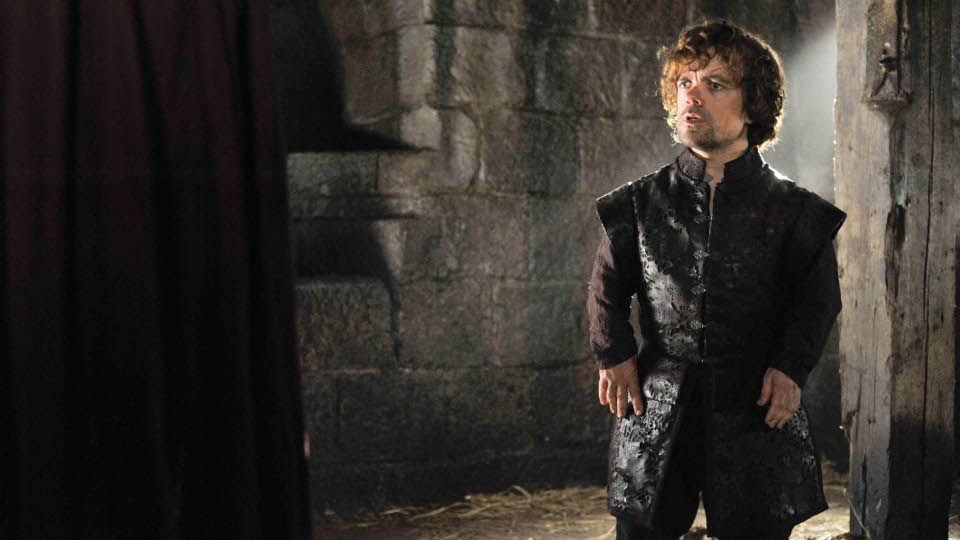 Last week’s episode The Lion and the Rose managed to leave us shocked and delighted. We couldn’t wait to see the fallout from the Purple Wedding.

Breaker of Chains is written by showrunners David Benioff and D. B. Weiss with Alex Graves once again in the director’s chair. The episode opened up in King’s Landing right where last week’s ended with Joffrey (Jack Gleeson) dead and Cersei (Lena Headey) screaming for Tyrion (Peter Dinklage) to be arrested.

During the chaos Ser Dontos (Tony Way) and Sansa (Sophie Turner) flee the scene. Shortly after Cersai notices that Sansa is missing and Tywin (Charles Dance) orders the gates shut so that no one can leave. However they do manage to escape the city in a small rowing boat.

They eventually meet up with a larger ship which is hiding in thick fog. Upon boarding the ship Sansa is met by Lord Baelish (Aiden Gillen). It turns out that he had hired Ser Dontos to help her escape with the promise of a large payment. Instead of paying he has him shot through the face and killed so that the secret doesn’t get out.

This seems to add more meaning to the necklace that Ser Dontos randomly gave to Sansa. Could that have had something to do with Joffrey’s murder without Sansa knowing? We did spot Olenna Tyrell (Diana Rigg) talking to Sansa shortly before the poisoning.

Speaking of Olenna she is next seen sat in the city gardens with Margaery Tyrell (Natalie Dormer). They talk of how Margaery won’t be seen as the Queen as the marriage to Joffrey had not been consummated. Olenna explains that she will be better off with Joffrey dead and that that the next one should be easier. Sounds like she has a plan?

We then visit the Sept where Joffrey’s body is currently held. Tywin, Cersei and Joffrey’s younger brother Tommen Baratheon (Dean-Charles Chapman) are stood around the body. Instead of wasting time grieving Tywin is already prepping Tommen to succeed Joffrey as King. It seems that Tommen is quite different to Joffrey and probably will end up a far more popular choice. His young age also means Tywin will likely have no problem controlling him.

Tywin walks off with Tommen while talking to him about ‘The Birds and the Bees’. At the same moment Jaime Lannister (Nikolaj Coster-Waldau) arrives and asks for the Sept to be cleared for Cersei to be alone with her son. It quickly becomes apparent that Jaime has other things on his mind than grieving.

After pushing Jaime away earlier in the season Cersei leads Jaime on and gets his hopes up of rekindling their incestuous relationship. It’s all a ploy though for her to try and convince Jaime to kill their brother Tyrion (Peter Dinklage) who she holds responsible for Joffrey’s death. After refusing her request Jaime pushes her to the floor by Joffrey’s dead body and rapes her.

In the Riverlands we re-join Arya (Maisie Williams) and the Hound (Rory McCann). They are disturbed by a farmer who catches them on his land. Arya’s quick thinking wins over the farmer who offers them shelter for the night. During dinner he also offers the Hound work in exchange for silver. He accepts but the next day he beats the farmer and makes off with the silver anyway. Arya is horrified but the Hound appears to be trying to teach her a lesson and tells her it’s just the way things are.

In the North at Castle black Sam (John Bradley) gets teased because no-one believes he killed a White Walker. Sam’s more worried about the safety of Gilly (Hannah Murray) and the baby and suggests she moves to Mole’s Town. She wants to stay but Sam takes her anyway and finds her a place to stay and work.

The news of Joffrey’s death reaches Stannis (Stephen Dillane) and Davos (Liam Cunningham) at Dragonstone. They need an army to act but do not have the funds to hire one. Later Davos visits the little girl Shireen (Kerry Ingram) who has been teaching him to read. While reading to her about Braavos he comes up with an idea to borrow from the Iron Bank so they prepare a letter.

Elsewhere Tyrion’s squire, Podrick (Daniel Portman) visits him in his cell with some smuggled supplies. He tells Tyrion news of Sansa’s disappearance and that he has been asked to testify against him. Tyrion demands that Podrick fetch his brother Jaime and tells him to flee the city.

Back in the North, Tormund (Kristofer Hivju) leads the wildlings in a raid on a village. During the raid the cannibal Thenn known as Styr (Yuri Kolokolnikov) sends a boy to Castle Black and tells him to tell them what they have done to the village and that they ate his parents in an attempt to draw the Night’s Watch out.

At Castle Black, Jon Snow (Kit Harington) reiterates that Mance rayder is coming and that they must defend the wall. They then learn of a band of Night’s Watch mutineers who have set up in Craster’s Keep. Jon explains that these mutineers could expose Castle Black’s weaknesses and hatches a plan to go and kill them first.

The episode finishes across the Narrow Sea with Daenerys Targaryen (Emilia Clarke). She is stood outside the slave city of Meereen with her army. Meereen send out their champion so Dany has the dilemma of choosing her own. Eventually she settles for Daario Naharis (Michiel Huisman). He stands on foot against the mounted champion of Meereen but easily dismounts and kills him.

Dany then makes a speech to the slaves of Meereen. She wants them to rise up against their captors. Finally she has her catapults fire barrels of collars from the slaves she has already saved to try and win the trust of the slaves.

Let us know your thoughts on Breaker of Chains in the comments below as well as your hopes for the season. No spoilers though please!

In this article:Breaker of Chains, Game Of Thrones, HBO, Sky Atlantic