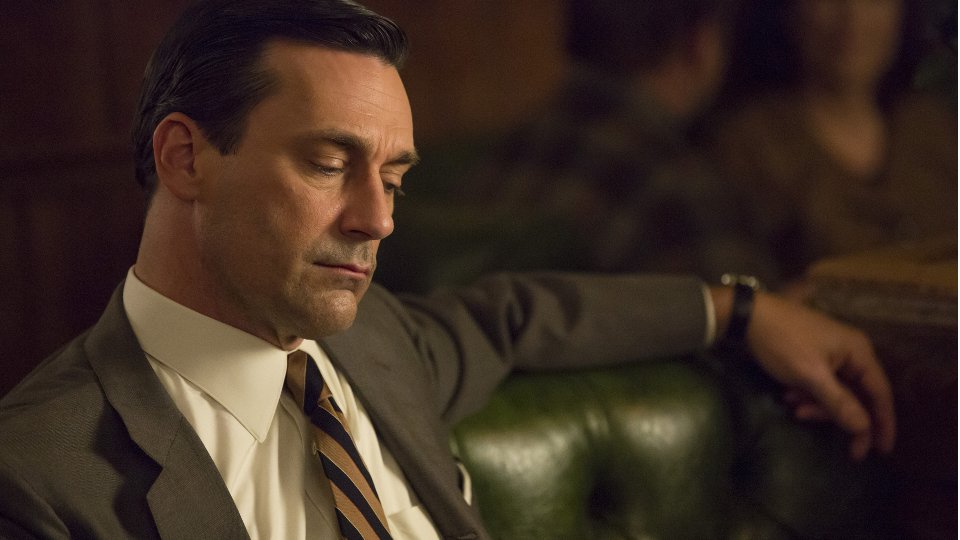 After catching up with the various characters in Mad Men in last week’s season 7 opener, tonight’s second episode of the season started to get down to business.

If you haven’t seen the latest episode of Mad Men and want to avoid spoilers then stop reading now. If you have seen it and want to relive all of the action then keep reading.

A Day’s Work honed down its narrative to focus on a handful of characters mainly this week as Valentine’s Day came around. Let’s start with Don Draper (Jon Hamm). Last week it was revealed that he hadn’t told anyone about losing his job and this week we saw that Don is still keeping up-to-date on all of the office happenings courtesy of his former secretary Dawn (Teyonah Parris). After Don’s abrupt departure Dawn was handed to his replacement Lou Avery (Allan Havey) on the understanding that he share her with Don, something he’s clearly not happy about.

In tonight’s episode we see Don passing his days eating and drinking himself silly until he puts on his suit and tie ready to face the world. He’s still attending lunch meetings as if nothing has changed and when challenged over the rumours briskly moves on dodging the reality of his situation. Well everything changed tonight when someone found out Don’s secret – his daughter Sally (Kiernan Shipka).

Literally nothing gets past that girl does it? She witnessed Roger’s (John Slattery) affair with Megan’s (Jessica Pare) mother and saw her own father doing the nasty with his neighbour Sylvia Rosen (Linda Cardellini) last season. On her way to the funeral of a friend’s mother, Sally realised she’d misplaced her purse and got off the train before it set off. Heading straight to Don’s old office, Sally was visibly confused to be greeted by Lou whose name is now on the door of her father’s old office. He told her that Don wasn’t there and was probably at home before trying to palm the problem off to Joan (Christina Hendricks) who fortunately was out at lunch.

Sally then headed over to Don’s house and waited for him to get home. When he did she caught him out in a lie as he claimed he had been in the office but she knows that isn’t true. He then tried to tell her he was feeling sick but agreed to drive her to the funeral so she didn’t miss it. Before they left the apartment Dawn phoned frantically to warn Don that Sally had stopped by and that she may have discovered his dishonesty.

Dawn’s phonecall turned out well for nobody as Don realised he was between a rock and a hard place and Lou was so aggrieved by the ghost of Don Draper that he requested Dawn be swapped with another secretary for not handling the Sally situation. Dawn protested that she was out buying a present for Lou’s wife hence why she was out of the office but Lou was having none of it. Dawn was promptly shunted onto the reception desk but more on that later.

Back to Sally and Don. It seems the youngster is still plagued by the vision of her dad and Sylvia having sex and she tells him so as they are driving to the funeral. That betrayal hit Sally really hard (it’s a good job she doesn’t know about all the others!) but eventually she stopped giving him a hard time when he explained that he didn’t want anyone to know he was forced out of his job. The moment of honesty between the two proved to be a bonding moment that was solidified further when he took her out for dinner and decided not to pay the full bill before the two of them made a quick escape.

As Don dropped Sally back at her school, along with a note explaining her late return, Sally told her father that she loved him taking Don by surprise.

So back to Dawn. The poor woman was further picked on when Bert (Robert Morse) told Joan that she shouldn’t be on the front desk due to the colour of her skin. Following all the drama of the receptionist swaps thanks to Lou, Peggy (we’ll get to that) and Bert, Joan had quite rightly had enough and was taken by surprise when Jim Cutler (Harry Hamlin) suggested that she take an office upstairs to concentrate solely on her account work.

Taking some time to think it over Joan appeared upstairs with her things packed ready to claim her new office much to Roger’s dismay. To be fair all Roger had in this episode was dismay and a lot of anger towards Jim. Joan’s promotion of sorts meant that there was no one to do her old job as office manager but she sorted that by handing the position to Dawn. That’s sure to upset Bert further isn’t it but bravo Joan!

Valentine’s Day held no love at all for one member of SC&P and that was Peggy Olson (Elisabeth Moss). Starting the day off with a misunderstanding Peggy thought the flowers on the desk of her receptionist Shirley (Sola Bamis) were for her. Intrigued by the lack of a card she swooped the flowers up and took them to her office. Shirley tried (and failed) to explain the flowers were actually hers and Peggy somehow got from that exchange that they were from Ted Chaough (Kevin Rahm) resulting in her leaving an angry message for him.

Tormented by the flowers, Peggy then gave them to Shirley only to request she threw them out minutes later. Eventually Shirley explained the flowers were for her and not Peggy leading to Peggy exploding with rage, giving her a dressing down and then marching into Joan’s office demanding she be swapped with another secretary. After Joan pointed out that there were issues with all of them, Peggy stormed off. That passive aggressive streak is not a good look Peggy!

Over in Los Angeles, Pete (Vincent Kartheiser) realised that his job is pretty much pointless and that he may as well be invisible. After a disastrous phone conference with New York, which saw his new account taken off him and given to Bob Benson (James Wolk), Pete moaned to Ted. After Ted told him effectively to take the money, Pete announced that the two should no longer speak to one another before storming out.

All in all there was very little in the way of romance for a Valentine’s Day related episode and it seems that all of the characters are reaching the limits of their tolerance. Joan is the only one who seems to be winning at the moment thanks to the support of Jim.

Mad Men continues at 10/9c Sundays on AMC in the US and at 10pm Wednesdays on Sky Atlantic in the UK.