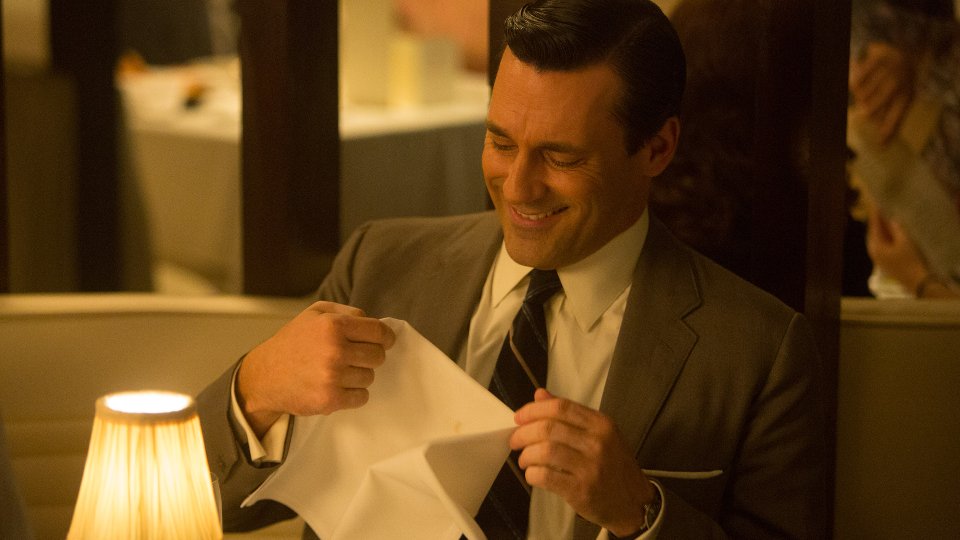 Mad Men kicked off its seventh and final season tonight on Sky Atlantic in the UK coming 3 days after the US premiere.

If you haven’t watched the season 7 premiere and don’t want any spoilers we suggest you stop reading now. If you have seen it and want to relive the action then keep reading.

It’s safe to say that Mad Men’s sixth season ended with a bit of a shocker as Don (Jon Hamm) was forced to take a break from the agency after spiralling completely out of control resulting in a bizarre outburst during a creative meeting with a client. Haunted by his past and fresh out of another affair, Don finally lost his grip on it all.

Where does season 7 premiere Time Zones find him? 2 months on from the season six finale and pretending nothing has changed at work so Megan (Jessica Pare) remains none the wiser. Last we saw Don and Megan he had encouraged her to quit her job on daytime soap To Have and To Hold to pursue her dreams in California. Taking her husband’s advice Megan did exactly that only to find out Don had changed his mind.

Megan’s determination and ambition still moved her to California and that’s where Don spends the majority of the episode visiting her. It seems that Megan’s career is going from strength-to-strength as she’s wanted for a new show, Bracken’s World, but her marriage to Don seems to be fracturing more and more as the days go on. She now lives in a small apartment in the Hollywood Hills which has a bohemian feel completely different to the high end living Don is used to.

At one point in the episode Don tries to get intimate with Megan and she admits she feels nervous. She also makes a few statements that suggest she’s enjoying living on her own. This becomes most evident when Don orders a huge new TV for the apartment, which is met with Megan’s disapproval. The future is not looking good for these two is it?

Whilst in California Don took the opportunity to catch up with Pete Campbell (Vincent Kartheiser) who has undergone some kind of laidback preppy/hippy combo kind of transformation in the style department. He’s also got himself a rather attractive realtor who Don attempted to make a pass at only for Pete to make it clear he’d already claimed her.

On his way back from California Don got chatting to a beautiful woman next to him on the plane (played by Scream’s Neve Campbell) and despite her advances after sleeping on his shoulder, Don didn’t give in to temptation. Will we see her back again? We find it hard to believe Neve Campbell would only do one small appearance.

At the end of the episode it was revealed that Don has still been working with SC&P through freelancer Freddy Rumsen (Joel Murray) who has been pitching his ideas to Peggy (Elisabeth Moss) without anyone knowing about it. Clever work Don. Very clever!

Speaking of Peggy, she’s having a rough ride once again already and we’re only one episode in. The end of season 6 seemed to promise a step up for the feisty female after Don’s ousting but Time Zones saw her clashing majorly with new boss Lou Avery (Allan Havey) and feeling all kinds of anger towards her former boss and fling Ted Chaough (Kevin Rahm). With Lou Peggy is finding all of her ideas sidelined, in most part due to her being a woman, whilst Ted is pretending all is fine and that he and Peggy are nothing more than friends.

As if problems in the workplace weren’t bad enough, Peggy is also having them at home when she’s taken on the role of landlady to a demanding family. She closed out the episode on the floor in tears of frustration at her life and her situation at work. Is there a light at the end of the tunnel for Peggy? We hope so because she really, really deserves a break this season.

Bravo to Joan (Christina Hendricks) who stepped up and was taken seriously for once in her desire to deal more directly with accounts. Following her infamous trade to be part of the top team at the firm, Joan has struggled to be more than a glorified office manager. In tonight’s episode Ken (Aaron Staton) sent Joan in his place to attend a meeting with Butler Footwear’s new Head of Marketing Wayne Barnes (Cougar Town’s Dan Byrd).

With her hopes high Joan refused to be beaten down when Wayne kept asking for Ken. After explaining she would be handling the meeting, Wayne informed Joan that Butler Footwear would be dropping SC&P and moving all of their advertising in house. Joan managed to negotiate a delay in that decision after she sought out advice from a university professor who has been giving her a crash course in marketing and advertising. Could we see a new and confident Joan becoming an account manager finally?

The other character we caught up with during Time Zones was Roger Sterling (John Slattery). Throughout the episode it appeared that Roger has agreed to be some part of hippy love tribe as he was seen naked and in bed with a variety of people including a younger woman who seems to be his girlfriend now. He managed to drag himself out of his drink, drugs and sex stupor long-enough to see his daughter Margaret who wanted to tell him she forgave him for all of the things he’s done wrong. Roger looking confused, refused to acknowledge that what she was saying was true but the newly enlightened Margaret didn’t even flinch.

It seems things have definitely moved on between this season and the last but it doesn’t look as if any of the characters are even close to a happy ending yet. Only Joan seemed to have a light at the end of the tunnel but in the cruel world of SC&P we wouldn’t be surprised if her happiness is short-lived. It’s going to be an interesting season for sure and we’re hoping that Bob Benson (James Wolk) will be making a return at some point especially as he was mentioned during tonight’s episode.

Mad Men continues in the US at 10/9c Sundays on AMC and in the UK at 10pm on Sky Atlantic.