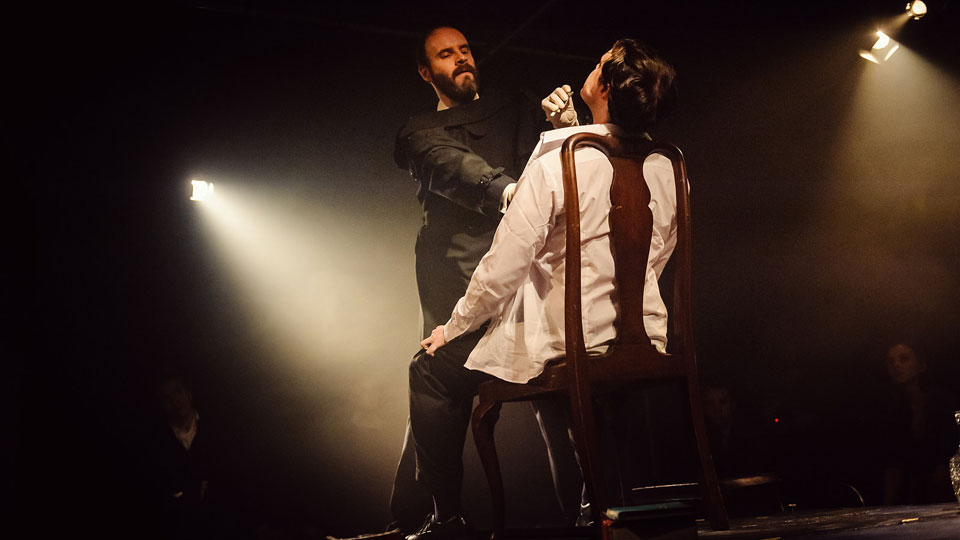 The Stock Market Crash and a prologue of surreal dance bring the audience into the world of the 1930s and America’s Great Depression, which is when and where this one-hundred minute version of The Merchant of Venice is set.

All of the action takes place in, around, and on top of an enormous wooden table that acts as a constant reminder of the mercantile background to the play. Far from restricting the movement of the actors, the table creates two separate levels of playing space which is used with great imagination.

There’s no interval here, just a straight run through a trimmed-down telling of Shakespeare’s awkward play: awkward because we can no longer watch it in the way his contemporary audiences would have done thanks to Twentieth Century European history. Awkward because whilst it’s undeniably comic (we’d forgotten how funny the line, “I would not have given it for a wilderness of monkeys” is) the incessant undertone of religious bigotry leaves a bad taste in the mouth. This production’s answer is to face the issues head on and to pull no punches in examining them.

When Bassanio decides to woo Portia, he borrows money from his wealthy merchant friend Antonio, who, expecting his ships at sea to secure him a fortune, takes out a loan with the Jewish Shylock, a moneylender whom he has repeatedly insulted because of his Jewry. Shylock’s bond states that if he fails to repay the loan, Antonio is obliged to give him a pound of his own flesh. With even his daughter conspiring against him, things go from bad to worse for Shylock, but when Antonio’s fleet is lost at sea, he pursues his bond to the letter of the law and demands his pound of flesh, at the same time taking revenge on the Christian society that has so abused him.

The story is vividly brought to life and expertly played to all three sides of the theatre, crafted through Ricky Dukes’ clear directorial vision and flair for stylish and visual story-telling. There are some delightfully imaginative touches, such as a sinister clown (we won’t spoil the surprise and say what that’s all about…) and the doubling up of parts for Bassanio and Morocco. Thus Alexander Shenton, tall, blond and slim, cuts a fine figure as Portia’s successful suitor; but dons sunglasses and assumes African accent for his fellow suitor, the unsuccessful Prince. It works surprisingly well.

The cast deserve great credit for attacking the piece with full enthusiasm and conviction. Rosemary Lippard’s Portia varies appropriately between feisty and intelligent young woman to infatuated flirt around Bassanio. Alexander Shenton and Paul Christian Rogers match up perfectly as the handsome but feckless Bassanio and the rich but far too noble Antonio (is there a touch of homoeroticism there? We think so.) Adam Cunis captures Gratiano’s pomposity, and you hate him for his baiting of Shylock by the end. The actors in smaller parts impress with their attention to detail too, particularly Joe Mott and Alexa Reed.

What of Shylock? Stephen MacNeice plays him as a rounded human being. He’s neither saint nor monster, rather something in between. He’s a victim of circumstances and a hurt man who lashes out at those who’ve wronged him. You believe him, and for that he invokes our sympathy.

As with the previous production of Lazarus’ current season (The Spanish Tragedy), The Merchant of Venice builds towards an epic finale. There’s no slow courtroom drama here, but a gripping confrontation of Shylock versus the rest of Venetian society. Commendably, there is no cosy final scene of Christians gloating here: but instead, a frightening and haunting echo of what lay in store for Shylock (a fate worse than death) and for the Jewish race shortly after the time in which this rendition is set. There’s no pussy-footing about: the logical conclusion of religious bigotry is left as the final image, and it’s a brave, confrontational and justified kick in the throat.

This production of The Merchant of Venice is a solid tale of commerce and religious bigotry, played at tremendous pace. It’s fast, slick, thought-provoking, and a strong take on a difficult play.

All photographs are by and copyright to Adam Trigg.