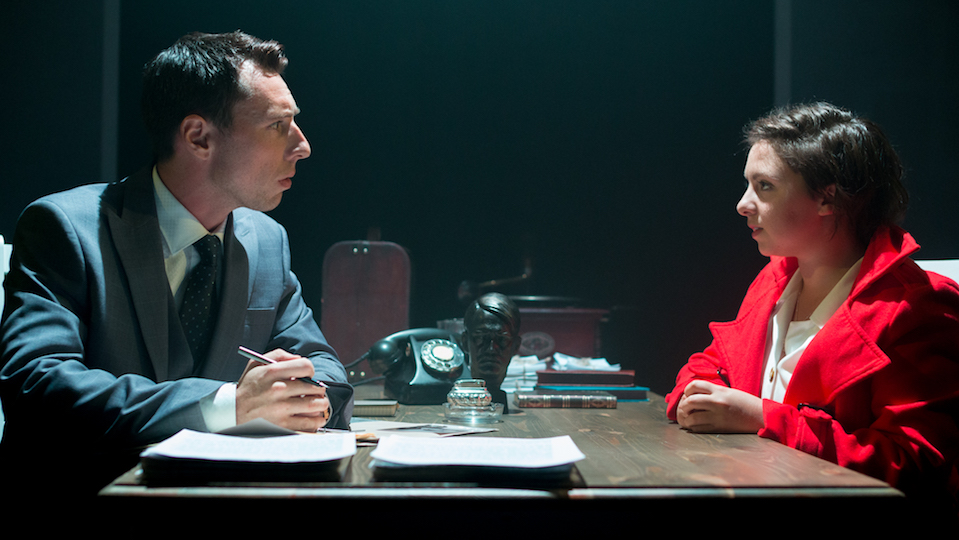 Based on a true story, The White Rose is a moving play examining the final days of Sophie Scholl. A 21-year-old Munich student, Sophie entered the history books when she led the only major act of German civil disobedience during World War Two. Along with her brother Hans, and a group of politically charged students who named themselves The White Rose, they published underground anti-Nazi leaflets calling for the peaceful overthrow of Hitler.

Young Sophie Scholl enrolled at the University of Munich in 1942, where her brother Hans was studying medicine, and started socialising with a group drawn together by their love of art, literature and music. Increasingly, they found themselves discussing politics and decided that something must be done.

This play does not make Hitler the focus, although clips from Nazi film reels are played at the top of the show and on the return from the interval to remind the audience of his powerful hate speeches. The White Rose explores the role that German citizens played in the ten years between his rise to power and 1943, as the war began to turn in favour of the Allies. With this production, Brockley Jack Studio theatre and Arrows & Traps Theatre company are marking the 75th anniversary of Sophie Scholl’s execution.

It is with this bitter knowledge that we watch Sophie’s story unfold. It’s a small, intimate theatre and the action begins with her wringing her hands at a wooden desk, being interrogated by a surprisingly sympathetic Gestapo Officer Robert Mohr (played by Christopher Tester with a soft, human approach as opposed to caricatured cold, heartless Nazis we’ve grown accustomed to in war films). At first Sophie Scholl (portrayed with vibrancy and intelligence combined with an endearing, youthful naivety by Lucy Ioannou) denies all knowledge of the accusations being laid at her door.

The staging is occasionally chaotic in the small space as Sophie is swept into a series of flashbacks with her fellow cast members joining her around the desk, as Mohr remains seated as Sophie’s memories play out in the gang’s hideaway. Some of the most convincingly tender moments in the narrative are those with Sophie’s fiancé, an army man, Fritz Hartnagel (Freddie Cambanakis gives a charming portrayal of a young Nazi soldier as the young lovers’ story is told through words and a sensual dance between the pair).

At times, the cast’s Received Pronunciation accents and British temperaments felt somewhat at odds with the setting of 1943 Munich. As if we were watching an Oxbridge gang argue politics and philosophy, but unconvincing German accents would perhaps have been more distracting. Sadly, Hans Scholl, Alexander Schmorell, Christoph Probst and Willi Graf all eventually met the same fate as Sophie. We feel for each and every one of them as, scene by scene, we see the lively, likeable bunch convince themselves that God is on their side, will protect them from the consequences… but the evidence gathered by The Gestapo is, of course, thorough. Sophie’s involvement in the distribution of the leaflets is undeniable. She’s offered a deal by Mohr – a bargain for her freedom by revealing the names of all involved – but brave, stubborn Sophie refuses. She’ll face the guillotine rather than compromise her beliefs and loyal friendship. ‘A strong spirit and a tender heart,’ is the moving mantra as she faces death for speaking her mind.

Throughout, we know the hopeless ending is headed and yet, when the time comes for Sophie, Hans and their brave comrades to be executed it does not feel like the end. These brave souls lay down their lives, just as the thousands of soldiers on the battlefields, because they have been given no other choice.

This play examines the moral strength and courage that led a group of young people to risk their lives for a righteous, dangerous cause. Given the chaotic condition of 2018’s world politics, while furious arguments stir on social media and ‘keyboard warriors’ rave regarding their freedom of speech among the rise of the Alt-right, this play is both timely and provocative. As Sophie and her friends discuss how evil succeeds when good men do nothing, it is hard not to question our own morals. Would we have the courage, like this young band of heroic – or foolish, depending on your point of view – students to sacrifice our lives for the sake of what we feel is right? Or would we sit in silence and turn a blind eye to the atrocities being committed? A provocative piece of real historical drama that will make you examine your life – and be thankful you’ve the freedom to live it.

In this article:Brockley Jack Theatre, The White Rose