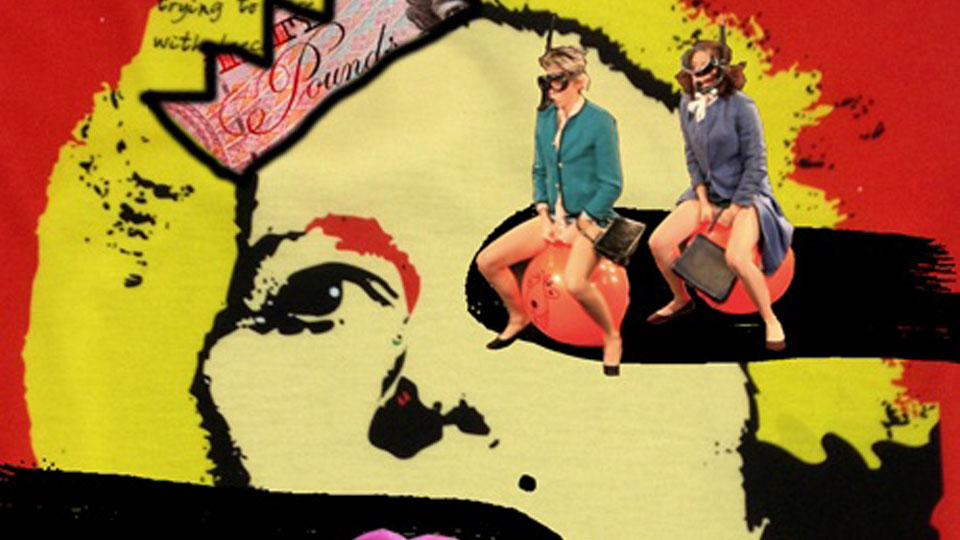 The 1980s seen through the dual lens of Thatcherism and pop music is the approach taken by The Lady’s Not For Walking Like an Egyptian. For those unknowledgeable about the 80s, the title is an amalgamation of one of Thatcher’s famous sayings, “The lady’s not for turning,” with the name of a pop song by the Bangles.

Written and performed by Rachel Mars and Nat Tarrab, the fifty-minute show examines their individual reactions to the 1980s, when Rachel was a child and Nat a teenager. This is does through anarchic and often physical comedy and scenes that seem improvised, lending the show a rough-around-the-edges feel.

It relies on a visual approach. The colourful lycra and Thatcher wigs are asked to do much of the legwork. In Two Ronnies fashion, Mars and Tarrab don thick black glasses to read the news, with Tarrab intercutting with lines from 80s pop songs delivered in the deadpan fashion of a newsreader. It’s a joke with limited mileage, but it is repeated a few times. The visual comedy is taken to an extreme with the performers on space hoppers, dressed as Maggie in a snorkel, bouncing all over a Blue Peter-like model of the Belgrano. The trouble is that the satire falls flat without any commentary about the Falklands War.

The show only really bursts to life when Mars, on a table in her knickers, recites Thatcher’s infamous homophobic speech that heralded the notorious Section 28, which shows a welcome touch of the comic grotesque. Tarrab’s reaction is rightly one of disgust, but again there’s little substance to the satire. It’s almost as if Margaret Thatcher has become such an obvious figure for parody and ridicule that it’s no longer necessary to expound on why this is the case. The overall show comes across as ill-considered, and the execution is anything but slick (starting quarter of an hour later than advertised didn’t help).

Having said that, there were audience members chortling, so clearly the humour and the overall approach resonates with some. The 80s are all the rage once again (rampant Thatcherism aside, which is really the point the show makes), so nostalgia buffs may be able to engage in the content. There’s also plenty of use of 80s pop songs: whether or not that’s a selling point is a matter of taste.

There is quite a glut of Margaret Thatcher-related theatre doing the rounds at the moment, since her death earlier this year. This one isn’t as incisive or as funny as others we’ve seen.

In this article:Nat Tarrab, Ovalhouse, Rachel Mars, The Lady’s Not For Walking Like an Egyptian