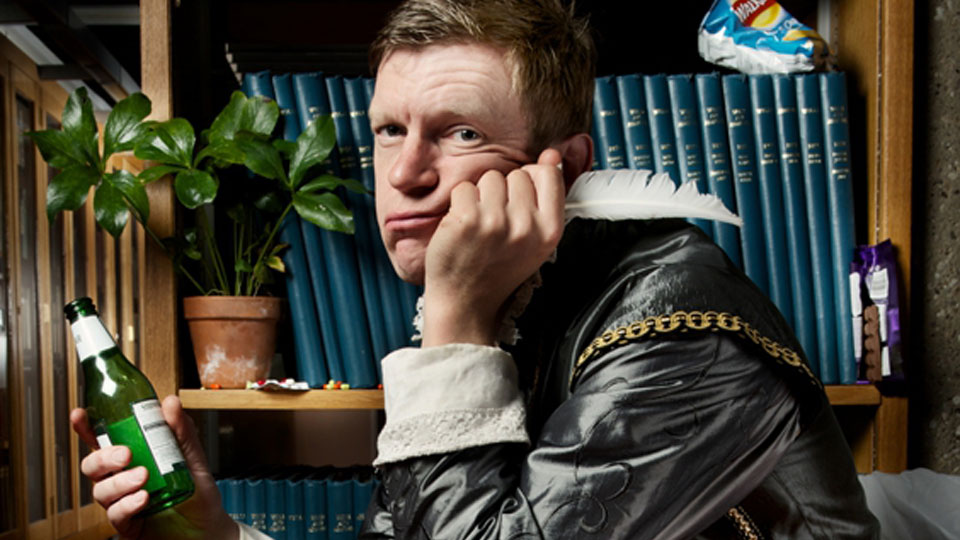 A lengthy Seventeenth Century treatise on the condition of human sadness – Robert Burton’s The Anatomy of Melancholy – may seem like an odd choice for an adaptation for stage: and so it is. However we can guarantee that Stan’s Cafe’s production is like nothing else you’ll see on the stage.

Verbose, certainly; intriguing and clever: those too. The Anatomy of Melancholy, even down to the multiple flip boards that form the background of the stage, has the feel of an informal Royal Society lecture, and is certainly as interesting. It’s not a story and it’s not populated with characters. Instead, over the course of a few hours you will be presented with the symptoms and causes of melancholy, with suggestions of treatments and preventatives, neatly divided into sections.

The lashings of words of wisdom from wise people throughout the ages – from the Ancient Greek philosophers to the authors of the Old Testament and beyond – will massage you into a state of mental well-being. It’s one of the most peaceful shows you can see and comes recommended as a high-brow chill-out.

The gentle, whimsical Gerard Bell is the audience’s route through into the strange world of Seventeenth Century medicine. He’s joined by Graeme Rose, the younger Craig Stephens and, providing a female voice, Rochi Rampal. Despite the oddball nature of the evening, and the barking mad medical prognoses and cures (which will make you very glad to live in a time when the functioning of the human body is better understood), The Anatomy of Melancholy is delivered through a surprising amount of wit and wisdom that will entertain and entrance.

The actors take on different narrative voices which offer the audience a constant variety to maintain the interest. Thus Gerard Bell is refined, authoritative and often diplomatic; leaving Graeme Rose to fulfil the slightly more undignified parts. The younger performers Rochi Rampal and Craig Stephens inject energy and are often employed to up the pace, scrambling for props to illustrate their points and ensuring that the show retains a visual punch.

This is quite a dense production. It’s not one to take a fidget along to, and it will probably sail over the heads of those whose preferred entertainment is the X-Factor. However, the show will offer huge appeal to anyone with a strong interest in the history of medicine and science (DIY doctors and hypochondriacs would do well to not take notes and disregard most of the advice). Whilst it is expertly performed by four actors who know very well how to tell a good story and entertain an audience, the show is undeniably long, running to not much shy of three hours – you certainly get your money’s worth but be prepared for a late one. Whilst the content is good and interesting, there is a certain amount of repetition (the cycling around of the idea of the importance of diet, for example), and perhaps a tighter show that culled half an hour’s worth of its babies may offer wider appeal.

We found The Anatomy of Melancholy charming, endearing and very different, but suspect that its appeal will be a little niche.  Yep, you have to be in the mood for this. But we were: and we found it spellbinding and rather magical.