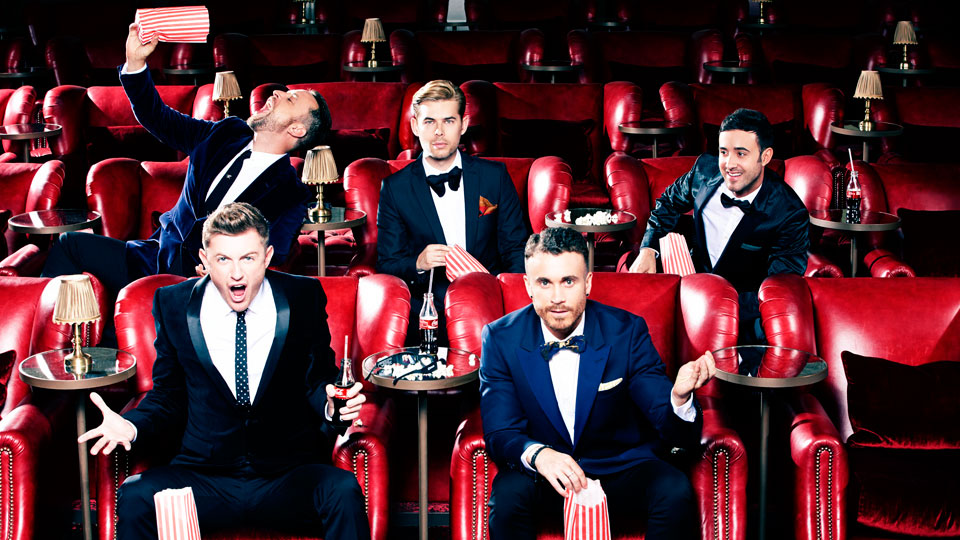 The Overtones are one of our very favourite groups and they just raced into the UK top 5 with new album Saturday Night at the Movies.

The album is their third and features a movie theme as the boys tackle classic songs from some of the most iconic movies of all-time.

We caught up with Mark Franks from the group to talk about the new album, get the scoop on their new tour and talk about his Christmas plans.

Firstly congratulations on hitting the Top 5 with Saturday Night at the Movies. How do you feel?

We’re totally thrilled with that! You never know when you’re working on an album how it’s going to be received. Obviously we’ve been away for a period of time locked away in a studio putting our heart and soul into the new album. We’re really, really happy. It’s good to see that people are still loving our music and that’s the main thing isn’t it?

Tell us a bit about Saturday Night at the Movies. Why did you decide to give the album a movie theme?

Basically when we started working on the third album we had a list of possible songs that we wanted to record. When we looked down the list it was obvious that a lot of them were from big films. We had Do You Love Me on there and we had Pretty Woman so it kind of just fell into place quite naturally really. We really embraced the idea of a concept because it gave us a focus. The whole movie theme lends itself to the kind of music that we record. We’re really proud of this album and we love that it’s got a strong theme as well.

As always you’ve got some original tracks on the album too. How easy was it to work them into the theme?

We were faced with a bit of a challenge for this album because they had to fit with the theme. We were really lucky and worked with some amazing songwriters. We got to co-write with Karen Poole, who was formerly of Alisha’s Attic, and she’s written some amazing pop songs for the likes of Kylie, Will Young and Sugababes so to be working with her was a total thrill. On a track called Miss Hollywood we worked with a guy called Tim Powell from Xenomenia who wrote pretty much all of Girls Aloud’s songs. It was good to have that focus. We went in there to write a song with a theme which was Hollywood and the movies. We feel like those three originals represent that.

Tell us about Hit The Road Jack which features Beverley Knight. How did that collaboration come about?

We had the song in mind for the album. We’ve not collaborated with anyone on our previous albums and we really wanted to on this one. Beverley doesn’t need an introduction does she? She’s the Queen of soul in the UK. We’re all inspired by her voice. She’s been around since the 90s and whilst we were growing up and she’s proven herself to be a real national treasure. We were so chuffed. She’d heard of us and jumped at the chance to be on the track which is an honour. We were in the studio when she recorded her vocals and we gave her a standing ovation after every take because she’s flawless and amazing.

Have you been to see her in The Bodyguard yet?

I haven’t you know! I have seen The Bodyguard but it was when Heather Headley was playing the lead and I really, really enjoyed it. I can’t wait to get down there and watch our Bev doing her thing. I’ve heard she’s great. We’ll look forward to that.

What should we be keeping an eye for you on prior to Christmas in support of the album?

Hopefully you’ve already spotted us on a few TV shows. It’s going to be more of the same really. We’re going to performing at Magic’s Christmas Sparkle Ball so we’re looking forward to that. It’s going to be us, McFly, Gabrielle and some other pop acts which will be great. We’re very busy boys! We’re doing a lot of radio and we’re going to be on Terry Wogan’s show, Chris Evans and some TV so watch this space.

How have you not been approached to do a televised Christmas special yet?

(laughs) We’d obviously embrace that with open arms so bring it on!

You recently announced a tour for 2014. What can your fans expect from that?

We love touring. It’s the frontline of what we do. We love getting out there and putting on a great show. We know people love a good night out and that’s what we’ll be giving them. As always it will be bums off seats, lots of dancing, a bit of silliness, lots of dickie bows and great tunes. We won’t be wearing any crazy Lady Gaga costumes. It’ll be what you’ve come to expect from The Overtones and all our songs from the new album.

Can fans expect some surprises as part of the setlist?

Yeah. We’re focusing on promoting the album at the moment so we’ve not started planning the tour. I suspect there will be a few cheeky little surprises in there. We love to take modern songs and put our own spin on them. We’ve got three albums worth of material now so it’s going to be a bit of a job to condense it into an hour and half/two-hour show. I’m going to guess there’ll be a few mash-ups in there.

Now that you’re three albums in are you getting more used to the album cycle or do you still get really nervous ahead of a new release?

When you’ve been away for a spell the record industry and music moves forward and just hope to be as relevant when you come back as you were with the album before. There are definitely nerves there. Ultimately we’re very passionate about what we do and put our heart and soul into it. As long as we’re giving out 110% we can only hope for the best.

I’m sure we’ll have Christmas Day off at least. It’s always a bit of a family affair for me. I’ve got a lot of family in Birmingham so I’ll probably be there with the extended family tucking into my roast dinner. I’ll be looking forward to that. There’s a lot of hard work and fun to be had before then.

The Overtones new album Saturday Night at the Movies is available now.  The guys will be touring the UK in February and March 2014 and you can get tickets at http://www.theovertones.tv/live.htm Watch The Overtones perform the title track from their new album below:

Advertisement. Scroll to continue reading.
In this article:Mark Franks, The Overtones