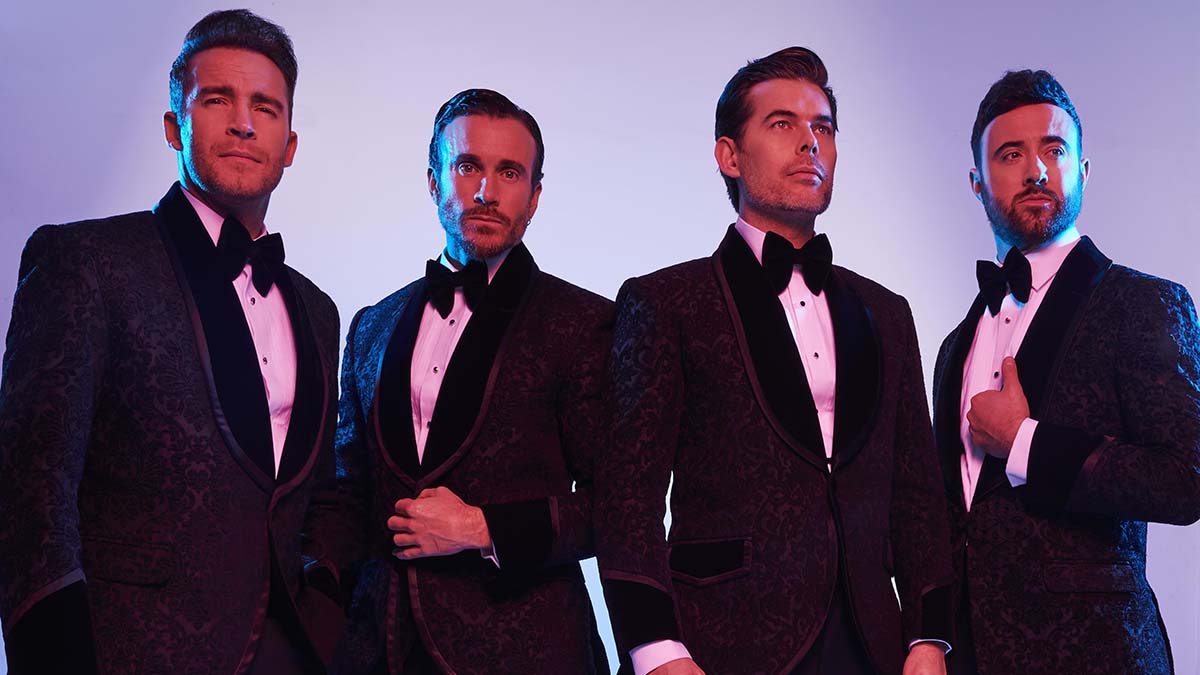 The Overtones release their first album today with Jay James in the line-up.

The vocal harmony group welcomed Jay into the group in 2019 after the departure of founding member Lockie Chapman. Since then, the pandemic wiped out the group’s touring plans but with things starting to open up again, the group is back with new album ’10’ and a tour later this year.

I caught up with Darren Everest, Mike Crawshaw and Mark Franks to talk about the band’s 10th anniversary, the new album, welcoming Jay into the group and their upcoming tour…

It’s been a few years since I last saw you and since then there’s been a change in the line-up with the addition of Jay James. What’s it been like having Jay as part of the group?

Darren: Do you know what? It’s felt like he’s always been a part of it genuinely. We met on a charity record for Samaritans just before we got signed and before Jay did ‘The X Factor’. We’d always been in touch and he supported us at shows. It might sound cliche but it was a natural fit. When we were talking about it we were like, ‘well, there’s only one option. Let’s ask him’. We told him, we didn’t ask him, and it’s really sweet because he said everything he’s ever done, he feels has led him to be an Overtone. He used to come to our shows and think, ‘I’d love to be a part of that’ when everyone’s up dancing in the audience. Honestly he’s a natural fit and the fans have taken to him. He’s a ball of energy, he’s refreshed everything and we feel like it’s our first album again. We’re ready to take over the world and travel to territories we haven’t been to and put on better shows than we ever have. I’d say for a good few years, we’re in the best place we’ve been in.

Jay really has just fit in really well. You know my mum is a big fan and she’s accepted him, and fans seem to have really embraced him…

Mark: We went out on tour in 2019 and we were a little bit nervous because of the new lineup but the audiences are absolutely amazing. It was easily the best tour we’ve ever done.  so that cemented the decision for us. It’s been great ever since.

The pandemic wiped out your tour plans and that must have been hard as you were just getting to grips with the line-up change. Did you use that time to strengthen the bond between you?

Mike: Yeah. Like with everybody over the last 18 months or so, we had our fair share of disappointments, struggles and heart ache. We had to cancel two major tours and all the shows that we had, which was tough for us but you know what we’re like Pip, we’re all about positivity and finding the best in any situation. What we were able to do as a result of that, being in a work bubble, was really take our time and focus on what this album was and what it what it needed to be, and how we could do that to the best of our ability. Our relationship is different now to what it would have been if we had released the album last year. It evolved during conversations and when we were recording, there were changes that were made and adaptations, and as a result of that we genuinely feel that we’ve got a really special 10-year anniversary album that’s done in a very sensitive way. Obviously, it’s a 10-year anniversary album with a slightly new line-up so it couldn’t just be a greatest hits that traditionally a group like us might do, where they just put in lots of the songs that have been our popular ones over the years. We did it in a way where we wanted to celebrate the past, the present and the future. I think we’ve done that in a really lovely way.

Kicking the album off with a new version of ‘Gambling Man’ is a real full circle moment and a great way to bring Jay into the history that you share as a band. What was the fan reaction like to that?

Darren: I think the general consensus was that everyone was really happy that we’d chosen our signature song, and the one where people discovered us, as the track to launch the new album. We couldn’t celebrate a 10-year anniversary album without having ‘Gambling Man’. We performed in on ‘Dancing On Ice’ and on ‘This Morning’, and that’s where people first discovered us. We had a conversation and Jay was up for it and really wanted to be part of it. We stopped performing it shows so we wanted to start performing it again and it just feels great. We’ve added a James Bond theme to it as you hear, and we’re really proud of the music video. There was a few people that were like, ‘oh, I’m not sure if you should have done this or that’ but we’re strong in our convictions and we were confident that the majority of fans would enjoy it, because we enjoy it. We’re really proud of the version so we can’t wait to perform it on tour.

You’ve got Michael Ball and Marisha Wallace as features on the record. What was it like working with them?

Mike: Really great. We’ve got a long-standing relationship with Michael. He’s a great friend of the band and has been for many years now. We’ve performed with him several times and we’ve featured on one of his records so it was a lovely full circle moment. We asked him if he’d like to get involved in and feature on ‘Can’t Take My Eyes Off You’ on the album and he was thrilled to get involved. We felt that we wanted another collaboration, but we wanted to make that special as well. Thinking about somebody like Marisha, we’re all huge musical theatre fans as well as the fact that we’ve noticed Marisha over the years. She’s a star in the making as a solo artist. The idea of her being involved was great to us. We asked her, she was thrilled to be involved and she’s on a really wonderful version of Simply Red’s ‘Stars’. It’s a power ballad version and lending her vocal to it has just lifted the whole song to another level. We’re totally thrilled that they’re both involved.

You mentioned earlier about how you didn’t want this to be a straightforward greatest hits. How did you decide what went on the record?

Mark: We had a good starting point with ‘September’, which was our debut song with Jay. We absolutely loved performing that on tour and it’s such a feel good song. so that marks the theme for the album. We wanted it, like all our albums really. to be a real, truly feel-good album. We followed that with ‘Celebration’, you can’t get more feel-good than that, so we used that as a benchmark. We wanted to honour the last 10 years so for us, it was about reimagining our greatest sets or at the fan’s favorites. With the deluxe album we’ve got this really stripped beautiful version of ‘500 Miles’ by The Proclaimers, which I can’t wait for everyone to hear. We’ve really spun it on its head and given it quite a haunting feel, actually.

Mike: I will say with ‘500 Miles’, it was something that included because that was part of Jay’s journey many years ago when he was on ‘The X Factor’. He performed a ballad version of ‘500 Miles’. We felt that the current Overtones and the future of The Overtones includes Jay. His journey brought him to where he is now so it was lovely to include Jay’s past into our present.

You have a tour coming up and I know that being out on the road is the part you love the most. How excited are you to be getting back out there?

Darren: We’ve never not toured for this long. It will be two years and we tour every year, twice a year sometimes. As you know there was tours cancelled and rearranged. It was a weird feeling because you just want to get out there and perform, but we weren’t able to. We got availability everywhere we could and we’re touring November and December. We’re so committed to putting on the best show we ever have. I think the the energy and electricity from the audience is going to be unbelievable, because everyone’s in the same boat. We did some one night only smaller shows at a jazz club recently and that was amazing to be back in front of people again. Everyone was up singing and dancing and we were like, ‘this is what we do. This is why we do this’. It’s going to be unbelievable. I think I might have to keep my distance from Mike because those hips are going to be unleashed after two years so it could be lethal.

It sounds like you’ve got a packed rest of the year on the cards. Didn’t I also see that Darren is about to become a dad?

Darren: Yeah, we did a lovely photo of Hello magazine, which was a really nice way to announce it. We’re so excited. There’s not long to go so it’s a bit crazy. It will be here very soon.

Darren: Yeah. Being close to Mike and watching what he’s going through is making me realise that I need to make the most of getting some sleep now and just sitting on the sofa enjoying a glass of red, and things like that?

Have you been swapping parenting tips?

Mike: Of course, I’ll be around if he needs any advice or any help or anything but I think Darren and Rhea will find their feet really well. They’re going to be amazing parents and Darren is going to be an incredible dad.

Darren: Thank you! I like to be busy and to be honest with you it’s a stage of my life that I’ve been looking forward to for years. I feel like I’ve been ready for a while to be a dad. I’ll take the baby on tour. I’ve got the ear defenders ready. It’ll be watching daddy perform in November. It’ll be exciting!

The Overtones’ new album ’10’ is available now. The band will be in tour in November and December, and you can grab tickets at https://theovertones.tv/.

In this article:Featured, The Overtones