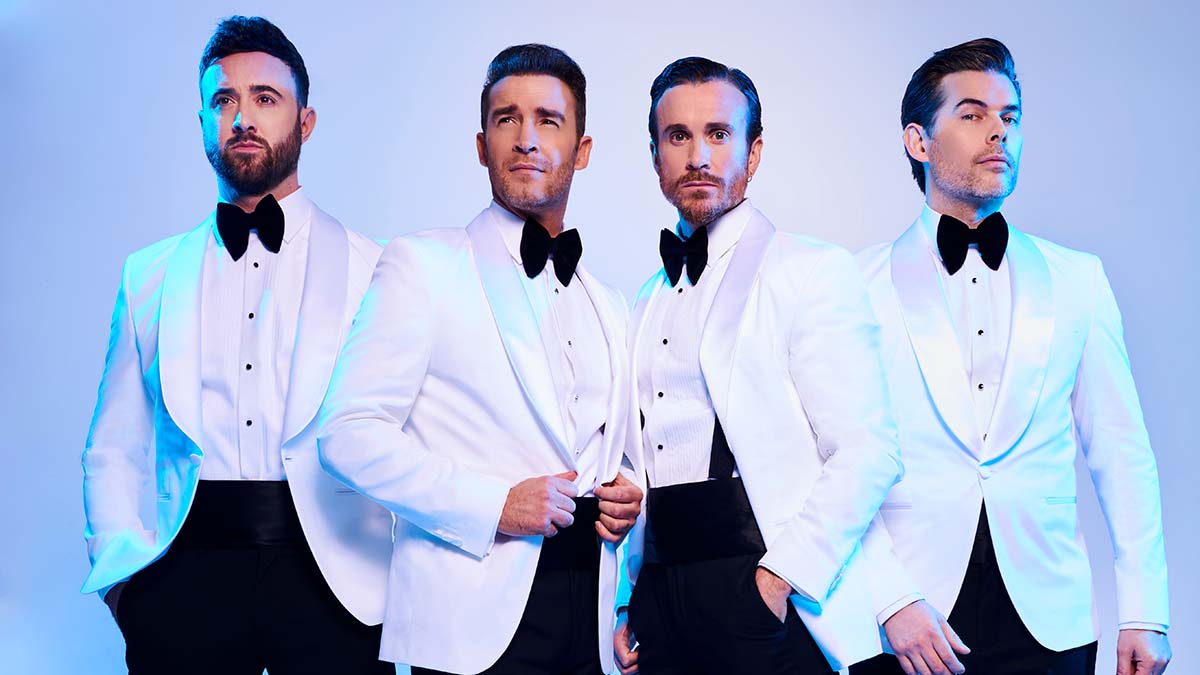 Vocal harmony group The Overtones crashed into the charts in 2010 with their debut album “Good Ol’ Fashioned Love”. The platinum-selling album peaked at number 4 and it gave the group a solid base that has kept them busily recording and releasing music, and touring, over the last 11 years. In 2018 original member Timmy Matley died following a fall from his balcony and the group continued as a four for one more album, ‘The Overtones’ in 2018, before another original member, Lochie Chapman, left in 2019. The remaining members – Mike Crawshaw, Darren Everest and Mark Franks – recruited former ‘X Factor’ hopeful Jay James to join the group and ‘10’ is their first full-length release with their current line-up.

Since James joined the group, the pandemic hit and side-lined the music industry meaning that the band hasn’t had too much opportunity to get new music out there and tour. With the release of ‘10’, an album that celebrates their tenth anniversary as a band, The Overtones are honouring their past and embracing their future with James in the line-up. The album opens with a new version of their signature song ‘Gambling Man’, which now includes James’ vocals, and it feels like a fitting way to start what is essentially one long celebration of a record.

For “Can’t Take My Eyes Off You” the group teams up with their friend, the legendary Michael Ball, while on a cover of Simply Red’s ‘Stars’, they enlist the powerful vocals of West End darling Marisha Wallace. As nice as those collaborations are though, the group doesn’t need other vocalists really as they are four capable vocalists in their own right. James has taken over the parts that would have previously gone to Matley or Chapman, and it’s nice to hear the voices of Everest, Crawshaw and Franks even more on this record.

The Overtones truly soar on the party anthems such as Kool & The Gang’s ‘Celebration’, Shalamar’s ‘A Night To Remember’ and Earth, Wind & Fire’s ‘September’, which appears here as a live version. They put their own stamp on Stevie Wonder’s iconic ‘Signed, Sealed, Delivered (I’m Yours)’ too, and that one is sure to be a live favourite. As with all their albums, The Overtones sneak a couple of originals into the mix with the more contemporary sounding ‘Amigo’ and the soulful Motown-esque ‘Rose Tinted’.

‘10’ is an album that’s very much dedicated to The Overtones’ fervent fanbase and it’ll tick all the right boxes. The group has enjoyed an incredible run so far and there’s plenty more to come with another tour on the horizon for later this year. The Overtones continue to be one of the most-loved acts on the live circuit in the UK and this album is sure to go down a storm once fans can get back into venues to see them live!