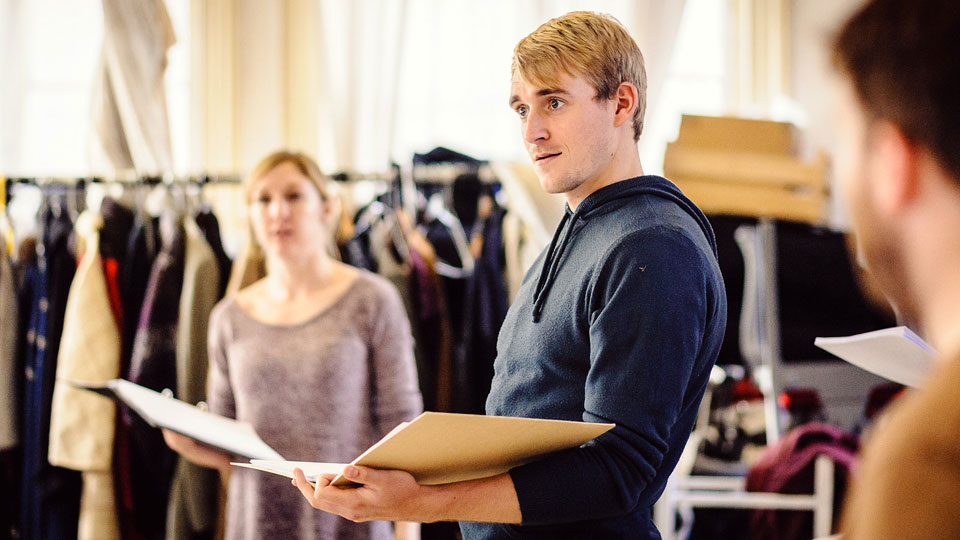 With Lazarus Theatre Company’s autumn season well under way, we caught up with some of their leading actors to talk about their final production this year – Shakespeare’s comedy The Merchant of Venice.

Stephen MacNeice is taking on the iconic role of Shylock, the Jewish moneylender; whilst Rosemary Lippard is playing Portia and Alexander Shenton takes on Bassanio.

Knowing their work, we figured their take on Shakespeare’s play would be an interesting and thought-provoking one, so we put a few questions to the actors to find out how they intend to bring the classic to the stage at the Brockley Jack. Check out the rehearsal video above too.

SM is Stephen MacNeice, RL is Rosemary Lippard and AS is Alexander Shenton.

What can audiences expect from this production?

SM: Epic theatre in an incredible and intimate space.

RL: Speed, intensely high stakes, profit and loss: and if we as a company do our job well, expect any expectations to be blown away.

AS: A bold piece of theatre that is physical, engaging and encourages its audience to think about the world that we live in.

The credit crunch and financial crisis forms the backdrop of this production. What do you make of that idea and how has it influenced your playing choices?

SM: There are parallels to be drawn there. Antonio is involved in his own way in the kind of high risk speculation that got us all into trouble in 2007. Also there’s the possibility that economic hardship, and the resultant daily struggle, create a more intolerant, prejudiced society, such as Venice seems to be in the play.

RL: The Merchant of Venice is a play about commerce. Not a single scene passes without some kind of transactional language. It isn’t only this credit crunch. It can include every recession, every crisis, on a personal and global scale. Reflecting on our modern financial system is one way of contemporising what is at stake in the play, without the audience needing to study a course on the economic and financial history of the 16th Century.

AS: I think that it is a strong concept as it makes the play incredibly relevant to the present day, In particular, when you remove the play’s anti-Semitism and consider the financial and transactional risks that take place. I was then able to relate the characters’ actions to our current attitude towards lending and borrowing money.

Shylock’s unpopularity in the play stems from his Jewry. How are you all approaching the anti-Semitism?

SM: Our starting point was always to look for the humanity of the characters. There are anti-Semitic characters in the play, but it’s not an anti-Semitic play. Shakespeare knew too much about the human condition to settle for easy answers and stereotypes.

RL: Religion is one cause of the prejudice in this play but hatred of Shylock doesn’t only stem from his religion. In the early part of the play it seems as though the religion is actually secondary to the real reason for the hatred between the Christians and the Jews. The way they each conduct business is the greatest irritant, until the latter part of the play when things get really out of control.

AS: You have to embrace it: it is a theme within the play and you cannot shy away from it. However, rather than playing to the stereotype we have realised that it’s more important to show that these are just human beings, not two groups of people divided by faith.

How are rehearsals going? Any aspects you really enjoy or especially hate?

SM: There are aspects of every day in the rehearsal room that you love and hate! But it’s going well. As our director would say, the beast is slowly taking shape…

RL: The process has been very gradual, we have a lot to do in the final week but I can’t wait to start staging the play. Getting the play up on its feet and bonding with the company has been the best aspect of rehearsal. The text is still proving difficult to break down, the complexity of every line has been very hard to make crystal clear.

AS: Rehearsals are incredibly thorough, which is a great challenge and one that I am really enjoying. The cast has gelled incredibly quickly and there is a great sense of ensemble. Personally I’m not a huge fan of frog squats, they are as painful as they sound!

Stephen, Shylock’s arguably one of Shakespeare’s most analysed characters. How daunting is it to take on the role and how are you approaching the part?

SM: It’s true he’s become an iconic role, and a lot of that is because of the catastrophes of the last century. So there is a responsibility there, but it’s also hugely exciting to be able to inhabit such a fantastic role. Our approach is to find Shylock the man, in all of his dimensions.

You were in The Tragedy of Mariam earlier in the season. How does this one compare?

SM: Well Mariam is not a well-known play; it was the first English play openly written and published by a woman (Elizabeth Cary). So it was a case of both the Company and the audience setting out and discovering the play. Merchant is much more identifiable: most people know it, or something about it, so this will be more about rediscovery. I played Herod in Mariam; an unstable, bloodthirsty tyrant with absolute power of life and death over everyone. Good fun.

Rosemary, how would you describe Portia? Do you empathise with her in any way?

RL: For me she’s resourceful, clever, impassioned, mature and generous. I do empathise with her; especially in not being free to choose whom she wants to marry. The idea of not making my own choices in life or being forced to have an idiot for a husband scares me to death.

You’ve done a fair bit of Shakespeare. Which have been your favourite roles to play, and any you’d still love to tackle?

RL: So far Maria, Lady Anne and Helena have been the favourites to play. I think the roles I would love to do most are Viola, Queen Margaret in the Henry VI plays, Julia or Silvia in Two Gentlemen, Hermione in Winter’s Tale and Beatrice in Much Ado. (Which is not to say I wouldn’t value a change toward contemporary plays as well…)

Alexander, this is your first production with Lazarus Theatre Co. How did you get involved, and are you enjoying the job and liking (or disliking?) your colleagues so far?

AS: I had seen the casting call go out and I’m a big fan of Shakespeare, so I looked into the company’s previous work and really liked their ethos; I then auditioned and I was fortunate enough to be offered a part. I’ve jumped in with open arms and loved the process. I have a huge amount of trust for the director and my colleagues which gives you a real confidence to play.

What are you looking forward to about performing at the Brockley Jack Theatre?

SM: Well, this will be my third show here so it’s good to see familiar faces and know your way around a bit. The theatre is a very intimate space, so as an actor you really get to connect with the audience, which will be very interesting with a play as volatile as Merchant!

RL: I am looking forward to performing in a much more intimate space, a real change from trying to make a 300-strong audience hear and understand you in a large open-air space.

AS: Performing on three sides is going to be exciting, the audience is right there so you can’t get away with anything, you have to be absolutely on top of your game.

What sort of audiences do you hope this production will reach out to?

SM: It’s always good to turn newcomers on to Shakespeare if possible, but we also want people who know the play and Characters to come along too and re-examine it. It’s a vitally important play. Anti-Semitism and prejudice will always be with us, so a story that confronts the consequences will always need to be told. It’s suitable for all.

RL: Everyone; both lovers and loathers of Shakespeare.

AS: I don’t think that we are focussing on one certain audience. I believe the play is relevant to us all. Anyone could come and see our production and there would be something relatable to them.

If you fancy being part of the audience to see Lazarus Theatre Company’s production of The Merchant of Venice, it runs at the Jack Studio Theatre from 19th November to 7th December. You can book tickets through Ticket Source.