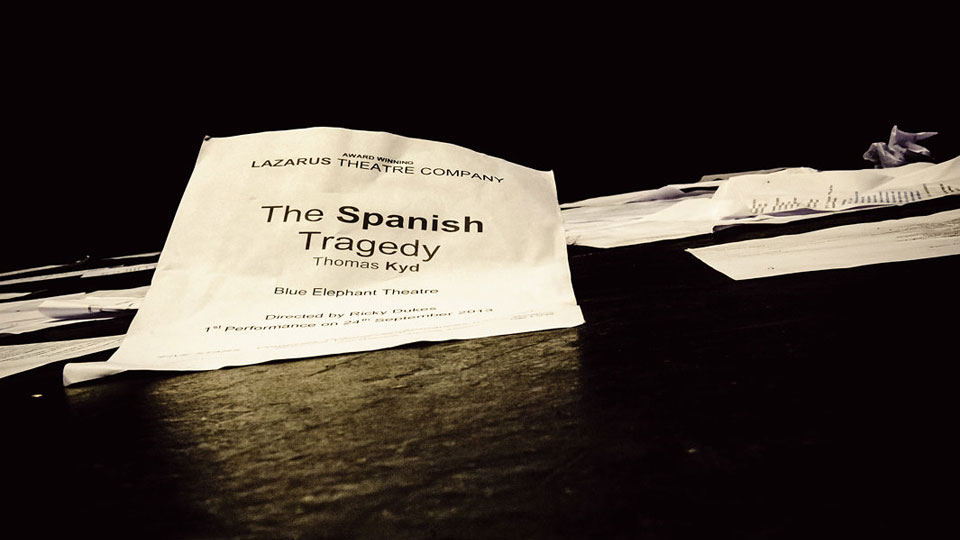 A bloody tale of murder and revenge has arrived at the Blue Elephant Theatre in Camberwell. Thomas Kyd’s poetic Elizabethan play, the first revenge tragedy of its kind, inspired many another English classic and remains under-performed. This slick and stylish production (words synonymous with Lazarus Theatre Company) is a relentless, one hundred-minute condensed telling of the story which hurtles along at a cracking pace before heading into top gear for a thrilling final act.

Spain and the subjugated Portugal are at war. A battle sees Portuguese prince Balthazar captured by the Spanish. Balthazar doesn’t mind too much, since he’s kindly treated and in love with the Spanish Bel-imperia. One problem: Balthazar killed her brother, whose angry spirit wants revenge. Bel-imperia instead courts Horatio in order to send Balthazar crazy with sexual jealousy. Yet when her plan backfires with a brutal murder, it leaves an angry Hieronimo stepping forward to seek bloody revenge.

Thomas Kyd’s Sixteenth Century play is enjoyable on many levels: the language, whilst arguably not as refined as that of Shakespeare or Marlowe, is deliciously rich, and the finely-balanced plot is thrilling. The subplot involving a play within a play devised by a protagonist who’s gone postal was clearly a major influence on Hamlet.

The moody, inventive lighting and filmic transitions between scenes mark it out as a Lazarus production, but, whilst the play has its fair share of angst and brutality, director Ricky Dukes injects a healthy supply of comedy into the proceedings which works well with the heightened reality of Kyd’s Spanish court. The King of Spain is played by Roseanna Morris as a grotesque combination between Margaret Thatcher and Lewis Carroll’s Queen of Hearts, a statement perhaps of the self-absorption of monarchy and its disconnect from the common people. There are the customary dance and movement segments, but a delightfully innovative song that forms part of the play within a play wouldn’t seem out of place in Spamalot.

Far from sending up the darker elements, the unusual comic interludes provide a sharp contrast. It’s through the character of Hieronimo that the theme of revenge comes into sharpest focus, and this is aided by a standout performance by Danny Solomon. His Hieronimo is played with intensity, and his later descent into madness is thrilling in its conviction. Solomon’s flat northern vowels work in his favour to set him apart from the rest of the court, and he crafts a committed and compelling characterisation.

Not all of the performances quite reach Solomon’s quality, with a few turns where the emotions of the characters are played on the outside rather that coming from within. It’s a large ensemble with no unrewarding parts, granting each actor plenty to get their teeth into. George Clarke’s agitated and slightly (we felt) unhinged Viceroy of Portugal is great fun to watch. The high body count and on-stage deaths is generally well-handled, usually with a stylised touch, but some death throes work better than others.

For the first hour or so, The Spanish Tragedy develops as well-conceived theatre. The transitions between scenes are snappy; and the aesthetics achieved through a combination of effective lighting, linen drapes, a few chairs, a smoke machine and actors on stage is commendable. What sets this production apart is the final act, which is nothing short of superb and exciting theatre. Whilst needing to pussyfoot around potential plot spoilers, the breadth of imagination for the closing moments of the play is incredible, and delivers knockout entertainment. The climax is thrilling and brilliantly realised, and more likely than not to leave you on the edge of your seat. There’s time for more humour still, even though it’s as dark as the black box stage by that point.

Overall, The Spanish Tragedy proves that with sufficient imagination and ambition, there need be no limitations in fringe theatre. It’s the final act that will especially live in the memory.

You can catch The Spanish Tragedy at the Blue Elephant Theatre in Camberwell until 19th October.