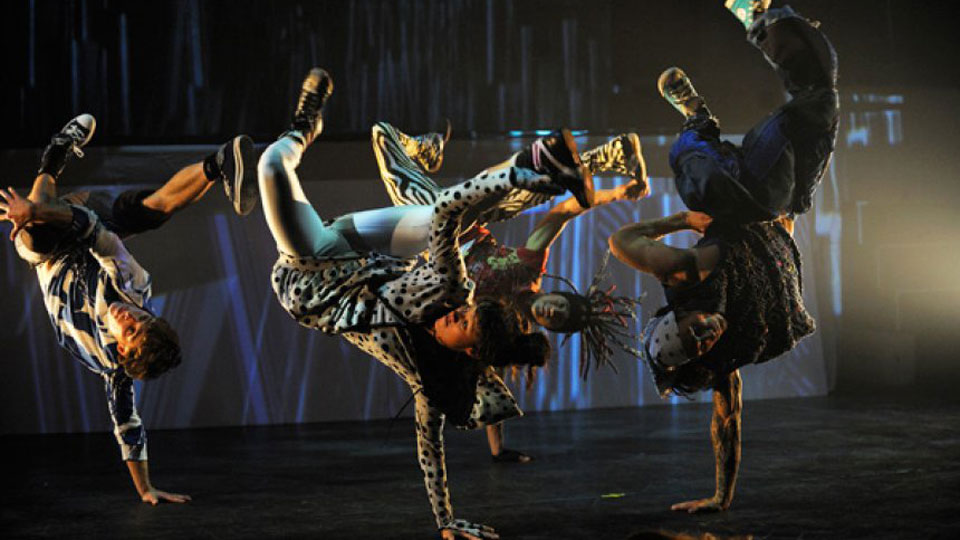 Cirque Eloize first established itself in 1993. There have been many productions formed over the last ten years, with the show ‘iD’, formed in 2009. Cirque Eloize have the crème de la crème of the circus, street and dance performers and the best stunts specialists all rolled into one completely spellbinding and jaw-dropping show of incredible talent. Cirque Eloize continually strive for artistic perfection and it is currently one of the leaders in its field of contemporary circus acts. Normally based in Montreal, Canada – Cirque Eloize are now on tour and have a three weeks residence at Sadler’s Wells Peacock Theatre.

“We started with the dancing, then began to explore. We found some very beautiful stuff. It’s a high energy show, but it also has very touching moments. When you mix a b-boy and a contortionist in a duo, you get something that’s really unique!” says Jeannot Painchaud, director of Cirque Eloize’s iD, which mixes hip hop dance and circus skills.

The show uses the acrobatic moves of circus and street dance performers to evoke ideas of identity on the city. Theatricality, humanity, combining dance, street art, street performance, music, circus skills and theatre. We watched the show and felt as though we were watching a film, or a video game, the street fighter video game in particular came to mind as we watched parts of the show. The stunts performed were just amazing, daring and performed with a complete look of ease. There are so many parts of the show which have you sitting at the edge of your seat.

Thibaut Philipps performing the bike trials were stunning to watch and we found ourselves biting our nails when crowd participation was required, we are just thankful that it wasn’t us up on the stage, as we are sure we would have been sweating profusely, even though we know that we would have been in safe hands – thanks to the brakes on the bike! Do you ever struggle to touch your toes? Does a bit of yoga make you feel as though you have stretched yourself to the limit? Well, Emi Vauthey contortion and aerial skills specialist will make you see just how flexible the human body can be. We watched as she placed her body in a number of stunning shapes and positions that we didn’t think the body was capable of getting into, as if it was the most normal thing in the world. We loved watching the juggling tennis balls scene, why juggle in the ordinary way, with seven balls – when you can bounce and go for a walk with them and have them bouncing between your legs, or do so lying on your back and bounce them off the wall? It makes our pitiful attempt of trying and failing to juggle three balls look like the lamest attempt in the world!

There were also beautiful elements to the show and the backdrop changed often – from an urban graffiti style inner city backdrop, to a dazzling night sky, with trapeze acts gliding from the roof like a feather in the wind, complete with complimentary music, it was a bit like watching a ballerina perform in mid-air, such was the grace and poise performed. The hip-hop and street dancing, complete with the incredible sound system gives the production a really cool and contemporary edge. No sooner was once scene happening, that another completely captivated you again and was ready to blow you away again. The scene where they build chairs higher and higher and higher and higher, reaching the top of the theatre, only for one performer to balance at the very top, with one hand was incredible and again this had us on the edge of our seats, particularly given the stack of tall chairs were having their fair share of wobble!

We first saw the posters for this show and thought that it looked pretty special, but now that we have witnessed the show for ourselves, we can say that special is an understatement. We absolutely urge everybody to go to see this show. We’d love to give it a six out of five, but we’ll have to settle for a five out of five. Go to see the show and prepare to be dazzled and amazed.