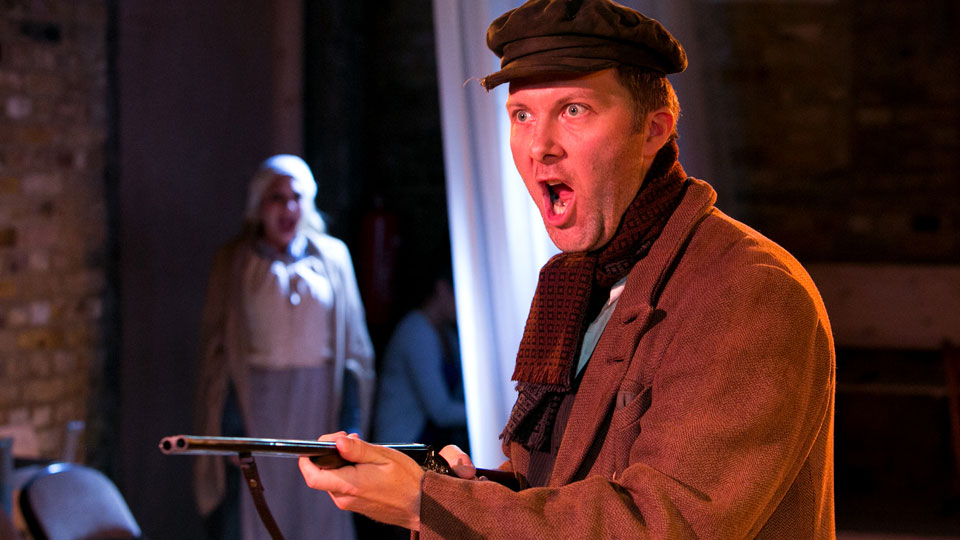 Bill Marner (Owain Browne) is a miller who longs to have a child of his own. Unfortunately his wife Winnie (Clara Kanter) cannot bear children so he embarks on an affair with her carer Maude (Susan Jiwey). Believing that he has got Maude pregnant, Bill is alarmed when a pregnant young girl named Louisa (Margaret Cooper) shows up on his doorstep. Turning her away, Louisa appeals to Bill’s aunts to help her following the birth of the baby and this exchange sets off a chain of events that mean Bill has to flee the village with his son.

The Miller’s Wife is an ambitious new opera from Mike Christie, best-known as one quarter of the former X Factor group G4, that debuted for three performances this week at the Arcola Theatre as part of the Grimeborn Festival. Christie has written the music and libretto for the show which was inspired by his own ancestry. Set in 19th century Essex, the story is one that involves inter-weaving stories and requires you to really pay attention to understand all that you see and hear. The 10 characters that appear over the show’s duration find their lives crossing over and what starts off as a seemingly harmless deed results in some truly surprising consequences.

The show opens with Alfred (Cheyney Kent) revealing that his daughter has died and suggesting that she was raped. He is filled with anger and hellbent on revenge, something that becomes the underlying threat throughout the story’s first act. We then learn how this all relates to the titular Miller as the first act unfolds and we learn of the dysfunctional setup Bill has as well as the deceit he is surrounded by. The second act leaps 20 years on and finds Bill returning to the village with William who is enamoured with a thatcher’s daughter Jessie (Eleanor Ross). It is their relationship that starts to unravel the lies and betrayal we see in the first act moving the opera to its gripping and emotive climax.

For the most part The Miller’s Wife was an engaging and intriguing production. The music was strong, despite only pianist Susannah Wapshott providing the backing (we assume in future productions an orchestra will be in place to flesh Christie’s vision out), and the performances from the entire cast were fantastic. In particular Susan Jiwey stood out as Maud stealing the first act with her powerful voice and performance. Tamsin Dalley and Lindsay Bramley were simply wonderful as Bill’s aunts and provided comic relief to the heavy tone of the show. William Morgan and Eleanor Ross made a believable couple as William and Jessie, and their voices sounded fantastic during the opening of the second act.

Director Matthew Gould made the most of the limited stage space at the Arcola Theatre. He ensured there was plenty of movement around the stage and that the characters performed out to all four sides of the audience during their arias. The set was lightly dressed to evoke the 19th century setting and it helped you to lose yourself in the story.

The only real criticism we had of the show is that the plot does get a little complicated at times. We found ourselves dissecting what we’d seen at the interval and at the end to ensure we’d fully understood how all the characters related to one another. This isn’t a particularly big problem but The Miller’s Wife could lose some audience members along the way if they aren’t paying close enough attention.

The Miller’s Wife is a fantastic triumph for Mike Christie. For a debut opera it’s packed with plenty of great arias, strong melodies, fantastic performances and story that will keep you guessing (and get you talking after the show). Judging by the reaction from the packed audience last night, and we hear of the previous two performances, it looks like The Miller’s Wife is destined for great things. Christie has created an opera that will appeal to those who have never seen opera before whilst at the same time delighting those that are passionate about it.