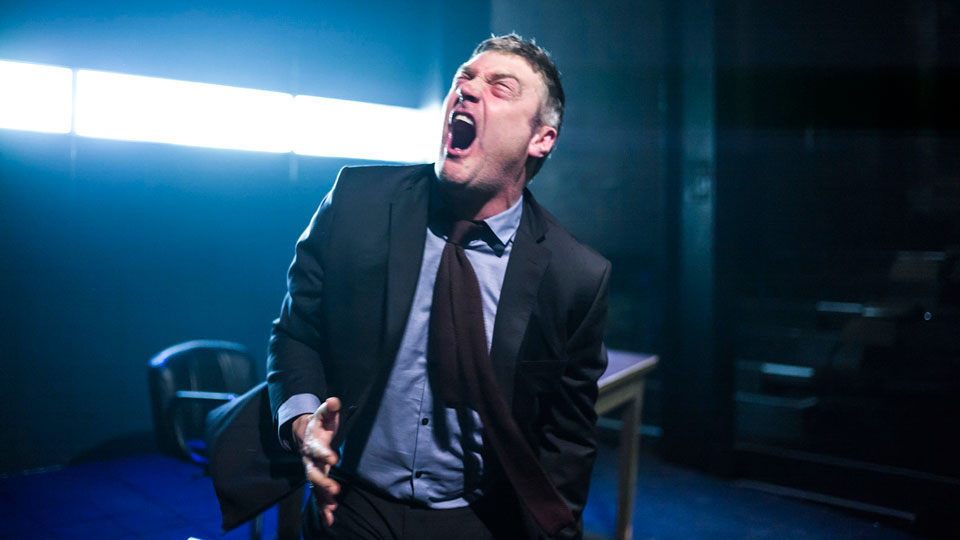 A Steady Rain is written by the hugely talented Keith Huff, whose credits include House of Cards and Mad Men. As one can expect therefore, this play has a lot of depth and is extremely well-written. The play has enjoyed enormous success on Broadway and has seen the likes of Hugh Jackman and Daniel Craig acting as the two Chicago-based policeman, whom the play revolves around. The play alternates between two separate monologues, mixed in with dialogue.

The set is bleak, black and gloomy: an outlook expressed by the events that evolve around the two characters. The men inadvertently give back a young boy to a man claiming to be his uncle, who turns out to be a somewhat highly disturbing and gruesome individual. The policeman have to take responsibility for this and it is at times very painful and eerie to watch. The power of the shouting and anger by the actors (Vincent Regan and David Schaal) is pretty scary and makes them look psychotic at times; a little bit too emotional, perhaps?

Given that the play only focuses on the two men, we have to imagine the other characters. We feel that the play would be best shown to its full capacity as a movie, as more characters would add depth. There is a lot going on and a lot that can be expanded upon. It feels as it the play is full of ideas which has been condensed. At times, the two actors become slightly monotonous. The one set design (with a few lighting changes and a splurge of rain), the grimness of that set, and the darkness of the Arcola Theatre made for a slightly sleepy vibe, albeit a very eerie and scary sleepy vibe! The monotony is broken up by the action: we are given a shock when something again doesn’t go to plan and we witness the messed-up story that is their life.

As the play goes along, it is slightly difficult to understand as to exactly what is happening, varying greatly from scene to scene. The actors give their all, even if they slightly over-act at times. If they turned it down a notch, it would seem a bit more realistic, but then, who are we to say? This is the theatre, after all. A Steady Rain is dark, clever, disturbing and shocking.