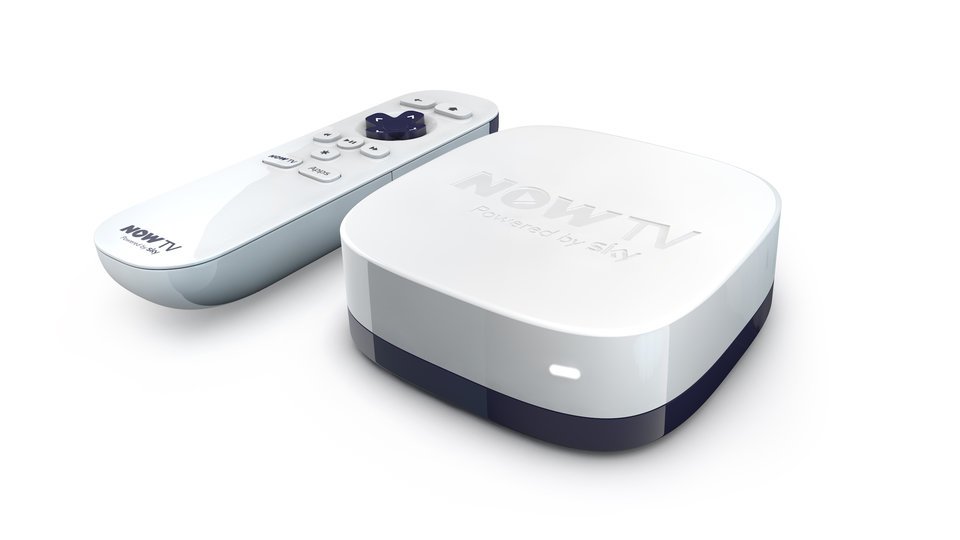 NOW TV has launched a brand new set-top box that will allow people to transform their normal TV into an internet-connected ‘smart’ TV. With a cost-price of £9.99, the NOW TV Box could prove to be  a massive seller.

Available now at nowtv.com, the compact and easy-to-use box connects your TV wirelessly to the internet.  Once connected, homes with the NOW TV box will enjoy convenient and contract-free access to BBC iPlayer,  Demand 5, BBC News App and Sky News, plus NOW TV – offering instant access to Sky Sports and Sky Movies. They can also access other popular online services such as Facebook and Spotify – all delivered over broadband to the big screen TV.

Despite the explosion in connected devices such as Sky set-top boxes, games consoles and connected TVs, there are still up to tens of millions of regular TVs in the UK that cannot currently connect to the internet.  The NOW TV box provides a simple way for any broadband-connected home to join the online TV revolution.

Until now, unless receiving catch-up as part of a pay TV subscription, consumers have needed to pay tens or even hundreds of pounds to purchase internet-streaming devices to watch catch-up TV on a regular TV.  With the new NOW TV Box, for less than a tenner, customers can access the best in catch-up TV.  But on top of this, they also have the opportunity toupgrade to access live sport and on demand movies from NOW TV.

Smaller than a pub beer mat, the NOW TV Box measures in at a trim 84mm x 84mm x 24mm and can be up and running in minutes. Simply plug the box into your TV set via the HDMI cable provided, connect to your wireless internet connection and you’re away.

The box launches as new research from NOW TV reveals the nation’s ever-increasing appetite to watch what they want, when they want.  Over two thirds of Brits have now taken advantage of on demand services on their main TV sets– whether via Smart TVs or other connected devices, with  two in five of us  streaming must-see shows or settling down to a movie on a weekly basis.

Over half the nation (56%) use more traditional internet-connected devices such as tablets, smartphones or laptops to access TV on demand whilst in the home.  For these people, the NOW TV Box will offer a simple and affordable way to enjoy catch-up TV, live sport and on demand movies on the big screen.

From launch, the NOW TV Box will let people access:

Over time there will be even more for people to enjoy with the addition of new content and apps to the NOW TV Box.

Gidon Katz, Director of NOW TV, comments: “Millions of people are switching on to the convenience and flexibility of on demand TV, choosing when and how they want to watch.  Now there’s an easy and extremely affordable way to make every TV a ‘smart TV’.  For under a tenner, the NOW TV Box offers the best terrestrial catch-up, plus pay-as-you-go access to must-see sport and the option to enjoy latest blockbuster movies on demand -all on the big screen. It’s also easy for anyone to use – simply plug in to your TV, connect to your WiFi and you’re away.”

More information on NOW TV is available from www.nowtv.com,or join them on Twitter via #NOWTVBox, @NOWTV and @NOWTVSport and www.facebook.com/NOWTV.

On demand data sourcedfrom Populus Home Entertainment Survey, July 2013 for Sky. The online survey carried out by Populus was completed by a nationally representative sample of 2049 people.

NOW TV, powered by Sky, provides instant and easy access to hundreds of films from Sky Movies on demand, and pay-as-you-go access to live Sky Sports. Taking advantage of the rapid growth in broadband-connected devices, and building on Sky’s experience in multi-platform TV, the service provides an additional choice to access and enjoy Sky Movies and Sky Sports.

NOW TV offers access to some of Sky’s most popular programming.  Sky Movies is the UK’s most popular subscription movies service giving access to 700 different movies on demand including up to four new and exclusive Sky Movies premieres each week. With a Sky Movies pass, NOW TV customers can choose from more of the latest and biggest movies first – 12 months before Netflix and Lovefilm Instant comparatively.

NOW TV is available to anyone 18 or over in the UK with a broadband or 3G connection across a wide range of connected devices including PC, Mac, selected Android smartphones, iOS devices, YouView and Xbox (the Sky Movies live channels and Sky Sports Day Pass are not available on YouView  and an Xbox 360 LIVE Gold subscription is required is required to watch NOW TV on Xbox 360).   Each device will benefits from an optimised design to deliver quality streaming with buffering minimized by the use of adaptive bitrate technology.

Currently customers can get unlimited access to movies on NOW TV with a 30 day free trial followed by a three-month introductory offer of £8.99 a month with the Sky Movies Pass.   NOW TV Customers can also get 24-hour access to all six Sky Sports channels live for £9.99 with the Sky Sports Day Pass.