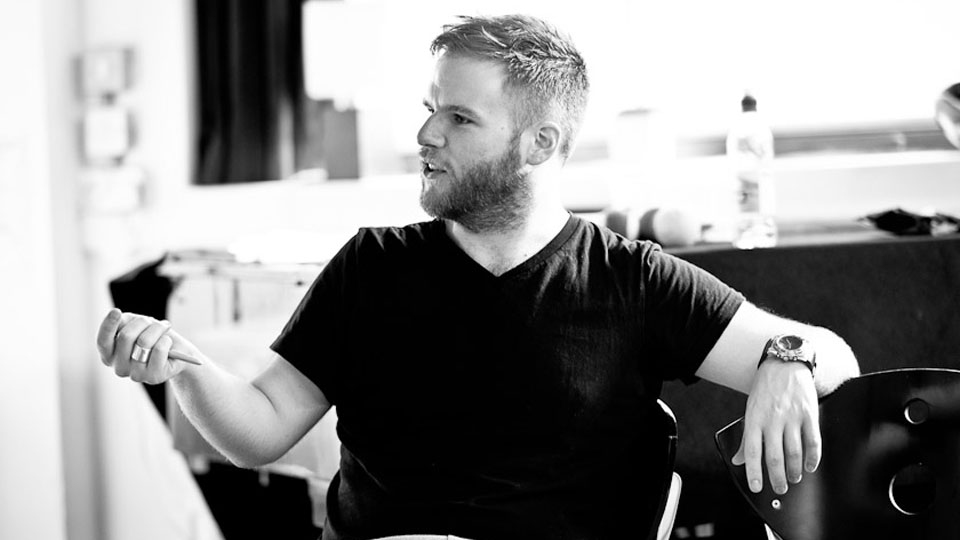 Ricky Dukes is the artistic director of Lazarus Theatre Company, who are currently performing their spring season of Dido, Queen of Carthage and King Lear at Greenwich Theatre.

It was time to put some questions to the main man behind Lazarus Theatre Company and find out what audiences can expect from the current productions, what it’s like playing in a new venue, and what they do at Lazarus HQ with their limited free time…

Hi Ricky, we last spoke to you when you were gearing up for Lazarus’ autumn 2012 season. How did that go?

Well so far so good, Oedipus was a tremendous production, and to return to our firm friends at the Blue Elephant was a great way to start the season. Lear and Dido has been an incredible process, challenging but incredible, beautiful and stunning way to conclude our spring season.

Tell us what we can expect from your spring season.

We started with Sophocles’ Oedipus, a production that we are incredibly proud of: Lear and Dido is a stunning rep with one company of sixteen actors. Both pieces are muscular, enchanting, ravishing and ultimately devastating, we love them!

Dido Queen of Carthage seems to tick all the right Lazarus boxes – a story from Greek/Roman mythology told by Jacobean playwright Christopher Marlowe. Why are you staging it now?

Dido is a stunning and enticing story, Marlowe’s language is provocative and engaging. We wanted to present a play to complement the themes of Lear: faith, passion and betrayal. Marlowe’s epic was the perfect piece. It has everything an epic should have: battles, love, lust, sex, passion, depravity and violence. In the words of Chicago the musical, all those things we hold near and dear to our hearts.

What ideas do you think Marlowe was trying to get across in Dido Queen of Carthage, and why do they appeal?

He was a provocateur, questioning the very staple of establishment. Like Webster he wanted to point the finger at those who were seen in a perfect light. Revolutionary of his time and now.

You’ve transferred to the larger environs of the Greenwich Theatre for this season. What have been the challenges and rewards of staging a show in a bigger space?

Firstly not being able to rehearse in the space gave us a real challenge. Rehearsing two epic plays in three weeks has been unlike any other process that we have been through before, exhausting, exhilarating and ultimately truly rewarding. Working for a bigger space has been incredible, our work suits the epic, and Greenwich Theatre has proven the perfect space for these incredible plays.  I love the space and the configuration: I do hope this is the start of a long term relationship.

Are you anticipating any change in your core audience as a result of playing in a new venue?

We’re attracting a new audience as well as our firm followers coming together to experience these new productions. Bringing our work to a new audience is incredible: it challenges, it provokes but ultimately entertains.

King Lear has previously been part of your rep. Why have you decided to revive it?

At first it was a revival, but what’s actually happened is a complete recreation. We have embellished and developed those aspects that worked in the 2012 production and completely looked anew at those aspects that didn’t. Lear is an incredible play. We were very proud of our season at the space in 2012 but wanted to revisit Lear. It seems incredible looking back at what we have achieved in the last three weeks.

What will be new about this season’s King Lear?

One of your directorial trademarks is setting your plays in specific times and places. Can you give away the eras chosen for Dido and Lear?

Lear felt a little lost last time, space and place wise. This time I wanted to explore the sense of madness, revolution. We found it in a pre-revolutionary, Cold War state. Dido has very specific references to Carthage, we just had to work out what Carthage was like. To us it became a warm, safe, beautiful oasis in the midst of chaos: a place that will never be the same again.

Lazarus rep actor Alice Brown is playing Dido. Did you always have her in mind for the title part? If so, why?

Indeed I did, Alice is one of our associate artists and proudly so. When I read a play I always instantly think of actors I know. Alice came straight to the fore. She is a stunning, engaging actress that is relentless in her work ethic, always striving…. something I truly respect in a performer.

Is there ever any downtime at Lazarus, and if so, what do you do with it?

No, well maybe a day here or there, but they are normally days when we go and see other people’s work! We love what we do. It’s hard at times, particularly financially, but while we still have the passion, desire and energy we shall continue working on the plays we love and creatives we admire.