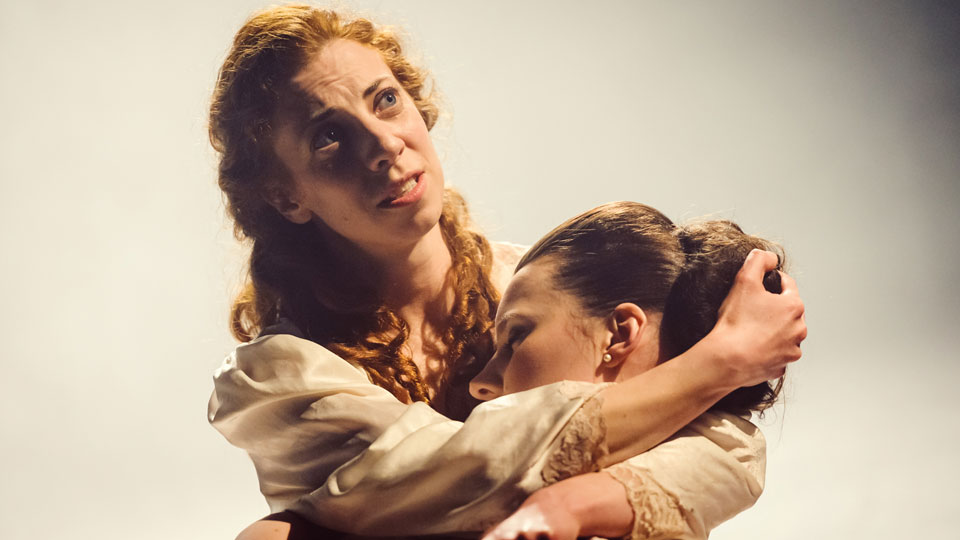 Jennifer Shakesby is currently starring in the title role of King Lear at Greenwich Theatre as part of Lazarus Theatre Company’s spring rep.

We caught up with Jennifer to ask her how she came to be cast as Shakespeare’s tragic hero, and how being young and female has influenced her characterisation.

Did you ever think you’d play King Lear? What was your initial reaction on being offered the part?

My initial reaction was one of scepticism – not so much because of the gender switch, but because I thought I wasn’t old enough. I wasn’t sure if it was an interpretation that could work on stage. However, a few discussions with Lazarus’s Artistic Director Ricky Dukes later and I was soundly convinced. Ricky has very clear and definite artistic reasons for casting a young woman and has such a unique, fresh and powerful vision for the Lazarus interpretation that I felt reassured that it wouldn’t be a gimmick and I had no hesitation in accepting! Once I accepted, I got incredibly excited! How often, as a young woman, do these sorts of meaty roles become available? I’m very lucky, and very grateful to be offered the chance, not only to have done it once, but to be asked to come back and do it all again! Although I did, and still do, get strange reactions when I mention who I’m playing – most people assume I am playing Regan or Goneril!

How did you approach the character of Lear?

It definitely starts with the language. Shakespeare wrote for actors: all the clues are there in the text for you. So my first approach is to understand the text, break it down, and find out what it reveals about the character. Lear’s language is incredible because it is acutely evident what she’s thinking or doing based on the way the language and its structure is used or changes in a scene. I also like to find imagery, metaphors and other such tools to help me access a character; I find them a more visceral and immediate way of discovering how a character ticks. If Lear is an element she is most certainly fire! Once in the rehearsal room my favourite part of developing a role is finding out what the other actors are offering in a scene and bouncing off whatever they’re throwing my way. That’s when it gets exciting! I love that the role of Lear belongs to the whole cast, because no role is created in isolation.

You’ve performed Lear before. Are you pleased to be reprising the part?

Yes, I am! Although not without a certain amount of trepidation! Lear is a juggernaut of a role. This is the first time I’ve reprised such a substantial role with the same company, so it’s not like I throw everything out the window from last year, but rather that some things stick and other things change. It’s a bit like taking a piece of clothing and altering a bit here, adding a bit of embellishment there, taking that sleeve off, adjusting the length etc. But the role is such a joy to play, that I am delighted I have the chance to get my teeth into it again – there is so much still to discover in the role. I found myself in the last three weeks being frequently surprised by new realisations and discoveries; that is what is so fantastic about returning to the role. The discovery of the new.

What will be the main differences in this production compared to the last?

The performance space is a big difference – it has moulded the physical shape of the piece and, as Lazarus work in such a highly visual and physical style, this is intrinsic. To get a bit abstract, last year’s interpretation was all about circles, spirals and rotations; whereas our Greenwich interpretation is all about straight lines and right angles. It feels very different. Although it still has a sense of imprisonment and entrapment to it like its first incarnation. We have a largely new cast as well, who all bring something different to their roles and to the feeling of the ensemble as a whole. And a new setting and period too! More sinister, dangerous and, dare I say it, sexier?

Can you tell us a bit about the Lazarus rehearsal process and any parts you enjoy/loathe?

The Lazarus rehearsal process is very rigorous and thorough. I enjoy working in an environment where the actors have plenty of input – ideas, images, physical work, research, are all shared throughout the process. Even during performance, actors will come in with an image from the paper or quote something they’ve read or seen; the work never feels like it stops. The stages of rehearsal usually move from research, work-shopping and exploration, ensemble building, to textual analysis and then onto staging. The staging is usually the last process, but having done all this ground-work, it feels pretty speedy as we’re all on the same page, figuratively speaking. There’s a synergy in the company which means we can work more effectively at this time.

(I think the only bits I can say I vaguely dislike is sitting around doing too much talking, but that’s mostly because I’m the kind of person who likes to get on my feet and explore – although I realise how important discussions are to the process so it’s a very necessary element.)

It’s amazing! The space is incredible, there’s a great sense of ownership walking onto that stage and seeing the seats raked away in front of you. I feel like we’re walking out there with a wonderful story to tell and I can’t wait to tell it.