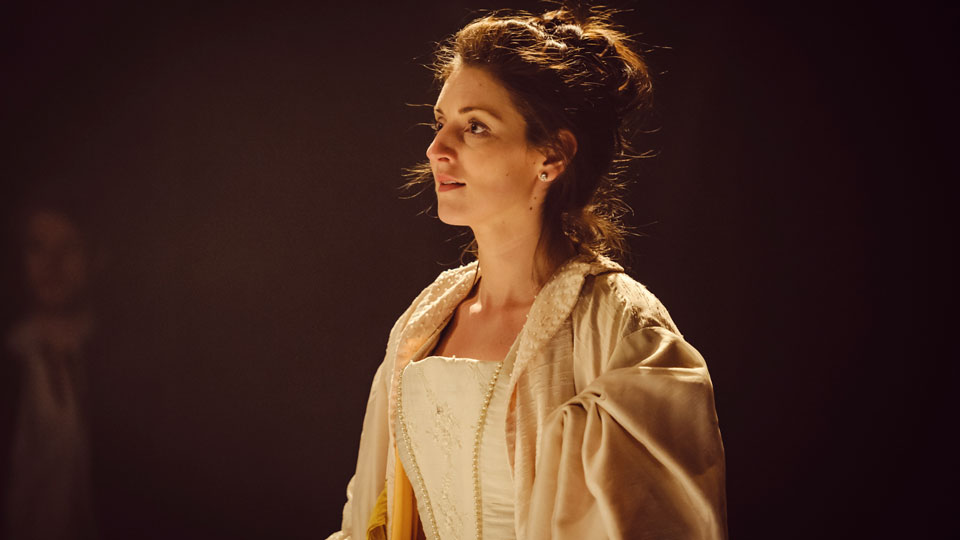 Alice Brown is an associate actor with the Lazarus Theatre Company, currently starring in Dido, Queen of Carthage and King Lear in their spring rep at Greenwich Theatre.

Since Alice is playing the lead part of Dido, we thought we’d catch up with her and ask her all about it. We’ve seen her play leading roles in plays by Euripides and Shakespeare, but it seemed the right time to speak to her whilst she’s breathing life into Marlowe’s tragic heroine.

We find out what she thinks about Dido, why she enjoys Marlowe’s text, and what she enjoys about working with Lazarus Theatre Company.

Alice, how did you come by the part of Dido?

As an associate actor of the company I’m often involved in discussions about possibilities for future productions. Some time ago, while he was comparing which combination of plays might fit together for a rep at the Greenwich Theatre, Ricky mentioned Dido and asked if I’d be interested in workshopping it at some point. It’s known as a ‘difficult play’ and not often tackled as a result, which certainly sparked my interest as I’m always up for a challenge! I instantly grabbed my complete works of Marlowe and an hour later – it’s a relatively short play for a play of the era – I’d fallen in love with it. It is a complex play, but those intricacies all serve to illuminate and compliment its core story. At the heart of it is a beautiful, genuine tale of love and hope that I think we can all associate with, and I knew that I wanted to be part of bringing that story to light.

I think initially, it might also have had something to do with me saying to Ricky a while ago that I’d like to do Antony and Cleopatra one day (another epic love story) but you’d have to ask Ricky about that!

What do you make of Dido’s personality?

As with people in general and with all great roles, I think Dido’s personality is multi-faceted and highly contradictory! There is also the added complication, of course, that she has been ‘induced’ to act in the way that she does by Cupid under Venus’ command. I think what has helped me as an actor to approach the enormous task of deciphering those contradictions, has been to go back to the mythological legends of the character. Marlowe’s text is very closely based on Virgil’s Aeneid, so I found that by going back to that and other source material, such as Ovid’s Heroides, where writers have taken the myth and improvised around it was really useful – the more information to start from the better! I think essentially she’s a determined, independent woman, who knows her own mind, values life and will accept nothing less of herself and those around her than living it to the full; which ultimately leads to her final act in choosing to move on from a life, in her opinion, no longer living up to those high expectations.

What do you enjoy about Marlowe’s text?

This is my first venture into the world of Marlowe’s writing so it’s been a fantastic period of discovery. There are similarities of course to working on Shakespeare, but there is definitely a different feel to it. What I love most about Marlowe’s text is how visceral it is, and his use of sound. Reading it in your head gives you the factual elements of the story, and in some ways it seems less poetic than Shakespeare, but once you get it on its feet and physically explore the sounds and feel of his words, you begin to understand how brilliant the writing really is. It instantly springs to life. I was working on a passage of the text and was surprised to find in order to play the words fully I was practically hyperventilating! In fact, that was precisely how Dido would have been feeling in that moment and so you realize that Marlowe gives you everything you need – it’s a gift to an actor!

We’ve seen you in Euripides and Shakespeare too. Do you have a favourite of the classic playwrights?

Well, the fickle answer is, I think my favourite is whatever I’m working on in that moment! I think what they all have in common and what interests me about theatre in general is exploring human nature through telling a good story. I also admire that none of them were afraid to adapt those stories in order to bring them up to date and make them relevant to the audiences of their time.

What are the challenges of playing the lead?

The challenges of playing the lead in a Lazarus production are perhaps different to those in any other in that we are all members of an ensemble and each actor and character is just as bit as vital as the next – including our little puppet Ascanius! The plays themselves only fully come to life when each layer of plot and sub-plot is clear enough to compliment each other and that requires each member of the company to be equally as strong. I think there are extra responsibilities that come with taking on a title role and also having worked with the company so many times before, but they are both a privilege that I respect and an exciting challenge I enjoy!

What do you enjoy about working for Lazarus Theatre Company?

Working for Lazarus Theatre Company demands every bit of you as an actor and as a person. It is rigorous, demanding and ultimately creates some of the most exciting classical theatre I’ve seen. Each production I’ve worked on with them has challenged me to challenge myself and so I’ve grown as a performer. I love working in an ensemble and the opportunities to work with such a large company are rare. Lazarus Theatre offers an opportunity to collaborate with cast and creative, which is for me, the most important thing about creating good theatre. Essentially it leads to what I love about theatre – that magical moment where a group of people, the audience included, share a common thought or feeling and experience something unique that will only ever happen once.