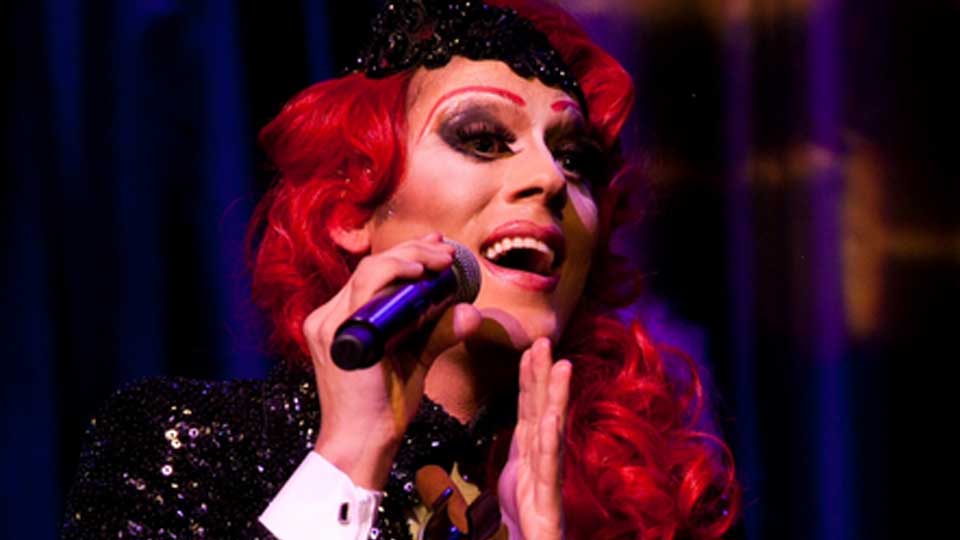 Velma Celli has been busy making her name over the past two years, performing a mix of West End standards and pop hits to audiences across the country. The alter-ego of established musical theatre performer Ian Stroughair (Fame, Cats, Chicago), red-haired Celli certainly has the confidence and bravado required to lead a night of entertainment and put on a good show, despite feeling a bit under-rehearsed.

Opening with classics from the likes of Cabaret and Chicago, Celli was in fine voice, which sounded even better in the second half – perhaps warmed up or just well-lubricated after swigging audience members’ drinks down in one! Some songs suited Celli better than others – Beyonce’s Sweet Dreams sounded sensational whilst Wicked’s Defying Gravity was perhaps a stretch too far.

Stroughair’s voice does carry the show, which is lucky because the personality of Celli doesn’t quite cut the mustard. She’s quite feisty and does interact with the audience well but the comedy aspect is lacking with only mild laughs coming from some impromptu flirting or alcohol-swilling. The character of Velma Celli seemed like more of a vehicle to give Stroughair a gimmick which, I suppose to that extent, works.

Celli was joined by a few special guests, including Nikki Davis-Jones who was in fine voice and sounded fantastic. The burlesque act and trapeze artist added a touch of glamour and thrills respectively and they both doubled up as backing dancers for a few numbers, which weren’t quite as tight as they could have been.

The promised ‘live band’ was actually only one pianist, which is a shame as the show would’ve benefited from a little more live music, especially as the sound engineers weren’t quite on the ball.

It’s worth noting that the Hippodrome’s Matcham Room is a fantastic venue for cabaret. Intimate, but with a wide stage, the space has the feel of a New York showbar with luxurious booths and table service. There is a small dress circle but sightlines didn’t look great and with shows like these you need to be in the hub of the action.

The night wasn’t trying to redefine cabaret and instead relied on crowd-pleasing numbers and guest performances, making for a solid night of entertainment.