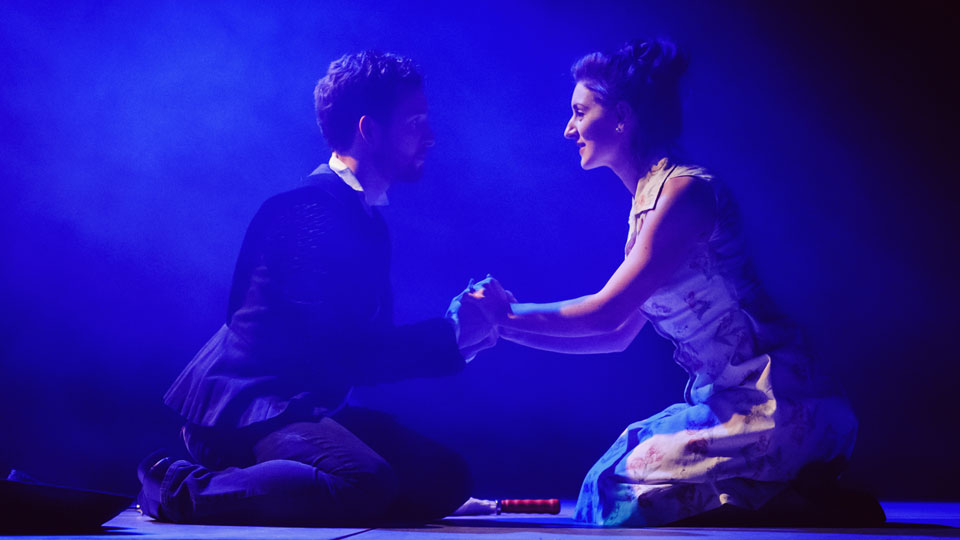 An epic tale of Roman antiquity retold by a Jacobean playwright: Christopher Marlowe’s underperformed Dido, Queen of Carthage has arrived at Greenwich Theatre and is staged by the London fringe masters of the classics, Lazarus Theatre Company.

Well known for their spectacular openings that often mix song, dance, and movement; the chant from the mortals of the play who circle the back of the stage in near-darkness is by contrast solemn. However, this gives way to the gods Jupiter and Ganymede, who appear from behind the rainbow clouds of Mount Olympus engaging in a good rough shag.

Such an attention-grabbing first scene (and a cheeky bit with a dial-up telephone as Jupiter summons one of his minions) runs the risk of being seen as provocative, though in truth the homoerotic depiction of Mount Olympus and the hedonistic sexual pursuits of randy top-dog (top-god?) Jupiter is entirely in-keeping with Roman mythology. The muscular Jupiter (Lewis Davidson) and his beautiful waif Ganymede (Harper James) as depicted here, in loose (very loose!) cotton sheets recall the overtly sexual statuary of the time. Harper James is delightful as Ganymede, depicting the youth as spoilt and effeminate, and he’s such fun to watch in the part it ends up being a shame Marlowe didn’t place him in more scenes.

Marlowe, and the actors involved in this production, clearly have a lot of fun bringing the gods to life. Lucy Hagan-Walker portrays both motherly concern towards her son Aeneas and sexual jealousy (who can blame her after she walks in on her husband Jupiter banging a pretty young boy in the first scene?), and her enmity towards fellow goddess Juno (Jen Holt) is well picked-out.

An innovative move is to avoid the perennial pitfall of having a child actor playing Aeneas’s son Ascanius through puppetry. This further involves the gods as they speak through the boy whilst they prowl out of human vision on the side of the stage: thus making the puppetry of Ascanius an allegory that works literally as well as thematically.

The constant manipulation of humans by the gods raises an awkward philosophical question about free will that Marlowe doesn’t escape from. Not only do the gods have much more fun, they’re also portrayed more in a more humanistic light, ironically enough, and they are entirely in charge of human fates. Aeneas isn’t so much caught between duty and love as given no choice but to obey the gods to the detriment of his happiness. But who can respect a man who refuses to take responsibility for his actions?

The stylised look and feel of the production (the gold-painted puppet and the use of folded umbrellas for swords – John Steed would approve – being visual examples) means that Dido, Queen of Carthage isn’t the warmest play. It’s presented instead as a somewhat surreal nightmarish fable where the walls of reality are often breached. Much of the action takes place on a raised circular pedestal in the centre of the stage, and the actors circle one another like boxers in a ring.

As the hapless, feckless Aeneas, Joseph Tweedale is suitably stoical. His real moment to shine comes in telling Dido the story of the destruction of Troy, a scene bolstered by the creation of another strong image as the cast enact the events Aeneas recalls like a moving frieze.

Of the humans, it’s Dido who impresses the most. Even she doesn’t escape from being manipulated into falling in love with Aeneas by the god Cupid, but Alice Brown’s full and feisty characterisation is impressive, and her inevitable fate is electrifyingly staged. It’s a moment when, with a little smile to her sister Anna (Gemma Beaton), the drama breaks free of the artifice and pulls on the heartstrings too. It’s a striking and rewarding climax.

Those familiar with the work of Lazarus Theatre Company will recognise a few familiar faces in their rep cast, and will enjoy seeing a longer production (this one runs to two hours, not including an interval) in the larger, comfortable surroundings of Greenwich Theatre. Dido, Queen of Carthage manages to be both a faithful rendition of Marlowe’s classic as well as modern and relatable. It’s running alongside their revived telling of King Lear, and plays until 1st June.

All photographs by Adam Trigg.

Greg Jamesonhttp://www.gregoryjameson.com
Book editor, with an interest in cult TV.
Previous article
ZooNation’s Some Like It Hip Hop review
Next article
The Victorian in the Wall review

Doctor Faustus comes to the Duke of York’s