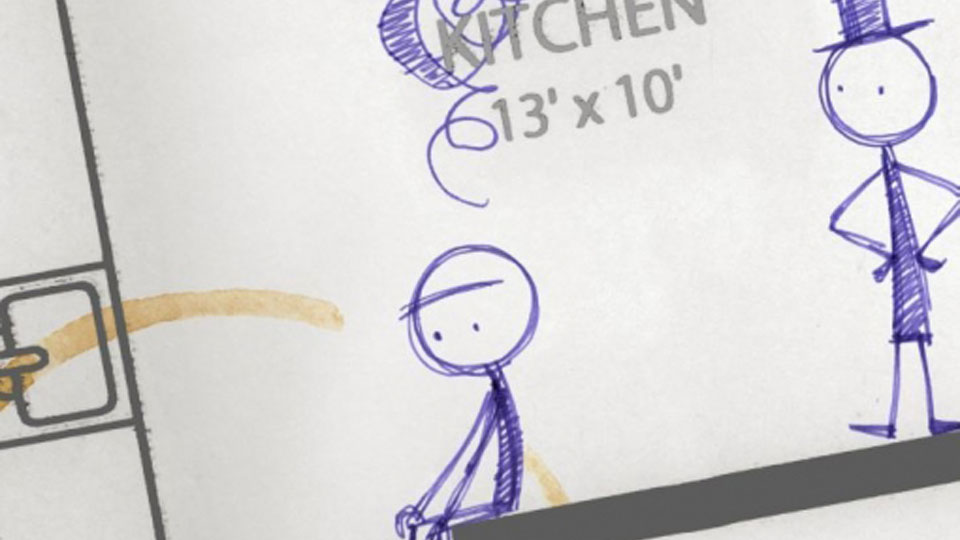 Guy’s girlfriend Fi, dubious about their relationship to begin with, heads off to Denmark on a business trip leaving him to supervise the building work in their flat. Things take a turn for the surreal when Guy and the builder Rob uncover a Victorian gentleman, Mr Elms, within the wall they’re knocking through. Naturally Guy remembers his manners and invites Mr Elms to make himself at home.

The Victorian in the Wall is a surreal, heart-warming comedy from Fuel, and is the brainchild of the multi-talented Will Adamsdale, who also stars as Guy and co-directs.

Whilst the plot seems crazy, and for the most part it is, it’s laugh-out-loud funny from start to finish. With a gentle and disarming voice, Adamsdale invites you into his world and pokes good-natured fun at middle-class pretentions, uncertainties, and the embarrassment of the English. It is chaotic – do we really need a subplot involving Mr Elms wooing music hall star Lou Porter? Probably not, but who cares? A few minutes in and, if you’ve any sense, you’ll just go with it…

The story is wildly inventive, and not one for those who prefer their theatre served up on a linear plate. As if Mr Elms isn’t enough to contend with, Guy opens his front door to find an African man calling him father, and not wishing to seem inhospitable, invites Fortunately Maybe inside to live with him too. Possibly his new ‘son’ is the result of a clerical error, or maybe even confidence trick by an adoption sponsorship charity? Either way, Guy is soon embarrassing himself performing poorly-judged Masai  ceremonial dancing.

The play consistently and thankfully avoids hitting the audience over the head with any grand serious points. It’s unashamedly and successfully daft, and certainly views life through a childlike lens of innocence. It’s great to see a piece of theatre that isn’t weighed down by heavy-handed issue-based drama, and which works simply as diverting entertainment. It is still an exceptionally well-written piece – it just doesn’t take itself too seriously and its story world is unmistakably middle-class. Both features make it highly refreshing and virtually unique in the current new writing (often two words to strike fear into the hearts of the casual theatre go-er) scene.

The Victorian in the Wall is beautifully and simply staged, with white lines delineating the layout of the flat, a few well-chosen props and the actors on stage at all times even when they’re not involved in the action. This frees them to contribute to another memorable aspect of this production – supplying sound effects by the truckload that add greatly to the ambiance of the piece. Possibly they have Melanie Wilson to thank for it (she plays Fi – and also a music hall love interest Lou Porter) – a sound artist whose previous works have included the sublime Autobiographer.

Music plays an important part in the proceedings too, thanks to a piano on the side of the stage, which allows the characters to burst into song upon occasion. With witty and pithy lyrics, the songs are heralded by the unlikeliest of references. We especially liked the number that followed Guy’s suggestion that they knock through a wall of the flat.

Adamsdale makes for a charming host, inviting you with wide-eyed and breathless enthusiasm into his mundane yet extraordinary existence. Matthew Steer is also very impressive as Mr Elms, who in personality is uncannily similar to Guy, and Jason Barnett is an absolute hoot as Fortunately Maybe.

Constantly creative, brilliantly realised and very, very funny, The Victorian in the Wall is a gorgeous, original piece of theatre that’s sure to brighten any day. An hour and a half in the chaotic, cluttered but irresistible mind of Will Adamsdale is time very well spent.