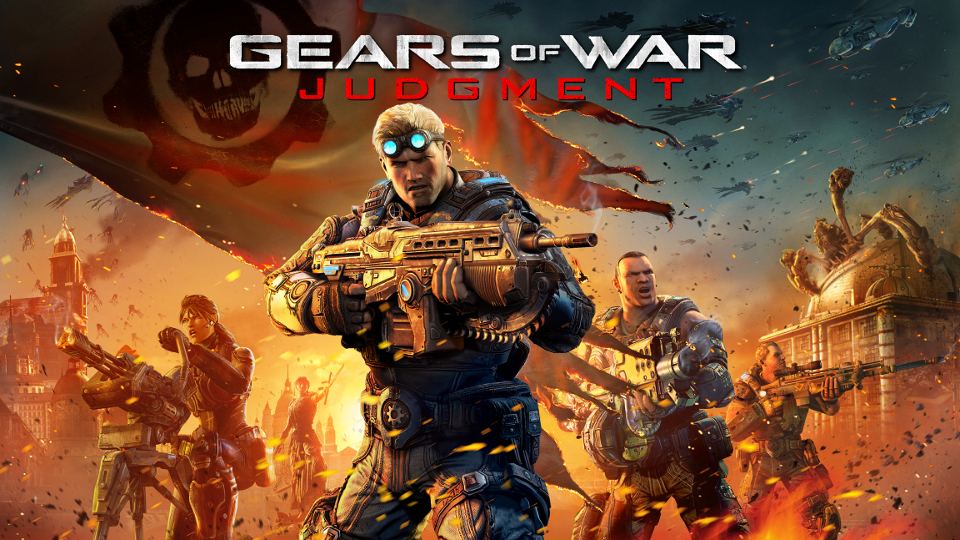 Gears of War 3 was a fantastic game that brought an end to the Gears trilogy and the war for Sera between the human race and the Locust. It was unclear what would happen next (if anything) with the franchise but the official announcement of a prequel to the trilogy at E3 2012 delighted Gears fans.

Gears of War: Judgment is that prequel which has been co-developed by Epic Games and their studio People Can Fly (Painkiller, Bulletstorm). People Can Fly are a perfect choice having previously worked on the PC port of Gears of War as well as helping with some development for Gears 2.

Judgment is set some years before the original Gears of War trilogy and it is the first Gears game to not feature Marcus Fenix as the protagonist. Instead the game focuses on fan favourite Damon Baird and his troop called Kilo Squad. Kilo is comprised of Augustus “The Cole Train” Cole and two newcomers – Sofia Hendrick and Garron Paduk.

The narrative setup for Gears of War: Judgment is quite interesting and revolves around the military trial of Kilo squad. Everyone was alarmed when the game was announced to see Baird in shackles so now you finally get to find out why. Throughout the game you get to play out the events for which Kilo are being tried. As each character gives their testimony you play their flashback as them.

Even more interesting is a new Mission Declassification system which changes the events of every part of the game. At the beginning of each mission you can choose if you want to disclose extra information. This is done by walking up to a bright red COG symbol, reading the information and choosing yes or no. Doing so adds new elements to the mission which increases the difficulty. For example you may disclose that you had to fight the Locust with limited ammo, in reduced visibility or with specific weapons. These can also add things like more powerful enemies or put you up against enemies that use advanced tactics.

What they do bring to the game is some extra choice and plenty of replayability. If you opt to declassify a mission but find it’s too difficult then you can choose to leave it once you respawn. Judgment also features a brand new smart spawn system that aims to bring more variety to your encounters. This mixes up the enemies you face, their locations and the timing of their attacks which makes things less predictable and again aids replay.

The influence of People Can Fly can be clearly seen throughout the game but this is especially apparent in the new arcade style of the campaign. Each chapter is broken up into smaller missions like in Gears 3 and there is a star rating given for your performance. When you choose to declassify a mission earning stars is faster due to the increased difficulty. Everything you do in Judgment, in both single and multiplayer, also earns you XP which allows you to level up your character.

As well as earning stars you can earn ribbons and medals. By performing certain feats such as killing multiple enemies with frag grenades, successive headshots or executions you earn ribbons. Getting lots of ribbons rewards you with Prize Boxes that contain items like new weapon skins or bonus XP. Medals are awarded for things like x number of kills with a certain weapon and there are different grades to each as well. The game lets you equip a medal to display along with your character for bragging rights.

Returning Gears fans are strongly advised to play the game on Hardcore difficulty for their first playthrough. Playing on anything lower means you’ll probably have a fairly easy time and get through the campaign in 6-8 hours. Hardcore gives a tough but rewarding challenge before stepping up to Insane difficulty. Judgment can be played solo with the rest of Kilo squad controlled by AI companions or you can bring along up to 3 friends for co-op fun.

We had a blast with the Judgment campaign and really enjoyed the new arcade focus. It doesn’t have the big set-pieces as in previous games such as the massive boss fights or vehicle sections but it makes up for it in pure entertainment. Many of the new missions feature tower defence style sections where you need to hold an area using turrets, gun emplacements and the new trip-wire crossbow.

Once you’ve accrued 40 stars you unlock a bonus campaign called Aftermath. This was originally intended as DLC for Gears 3 but was held back for Judgment. The story of Aftermath is a different experience to the rest of the game and serves as an epilogue to the main Gears 3 campaign. It’s another well put together campaign that fans won’t want to miss. It lasts about as long as a Judgment chapter (7 missions).

Graphically this is the best game in the series featuring stunningly detailed environments throughout. Coupled with excellent sound design the atmosphere is incredible and you really feel like you’re walking through a world facing annihilation. There are earthquake tremors while buildings crumble around you. Looking into the distance you can really see the extent of the devastation and a look to the skies can be terrifying as you see the Locust reavers overhead. The voice acting is brilliant throughout with Fred Tatasciore stealing the show as Baird.

No Gears game would be complete without a significant multiplayer component and Judgment doesn’t disappoint. It would have been easy for the developers to wrap up the modes from previous games with a few new maps but we’re pleased to say they didn’t take that route. The included modes are Team Deathmatch, Survival, Domination, Free-for-All and OverRun.

Most of the modes now only feature COG soldiers with red versus blue team which will disappoint some fans who enjoyed playing as Locust in multiplayer. Team Deathmatch is 5v5 where you compete to deplete your opponents respawn pool. Free-for-All is pure 10-man deathmatch and does away with teams for the first time in the series.

OverRun is our new favourite multiplayer Gears mode. It uses a new class-based system where players can choose from soldier, engineer, scout or medic. The soldier is the best for combat and can spawn ammo crates. Engineers can erect defensive turrets and repair defensive fortifications. Scouts are the long-ranged class and medics can heal using the new super cool stim-pack grenades.

In OverRun it’s incredibly important to have a balanced team. A team with all of the same class or missing one or two classes is really going to struggle against an organised balanced team. OverRun is played over three rounds with Locust attacking and COG defending. The aim of Locust is to re-open emergence holes before finally destroying a power generator.

Locust players initially are presented with a choice of Tickers, Wretches, Grenadiers and Kantus but as they progress more powerful creatures become available – Ragers, Maulers, Serapedes and Corpsers. These are great fun to control and an organised team will have Kantus healing their more powerful troops.

Gears of War: Judgment breathes new life into the franchise and gives players a different experience to previous games. There’s a generous amount of content on offer and heaps of replayability to be found in both the single and multiplayer. If you’re a Gears of War fan then you simply must add Judgment to your collection.